Home / Dissent NewsWire / Your Right to Protest is Under Attack 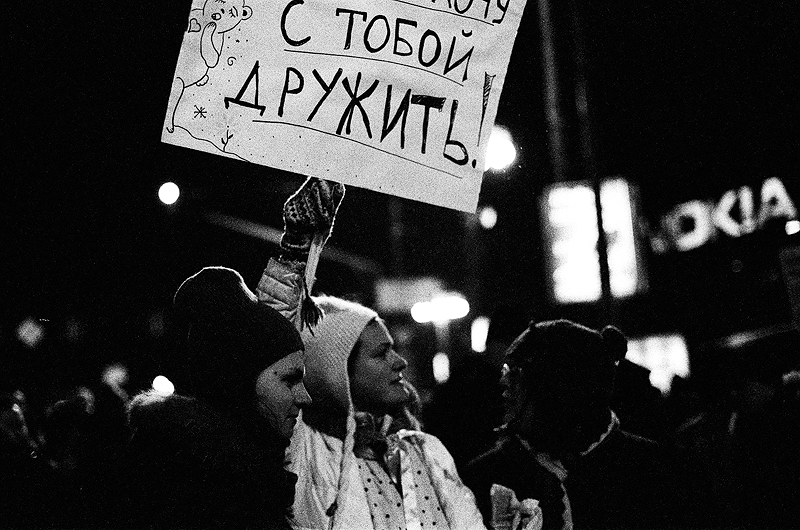 Over 1,600 Russians were arrested on May 5 for peacefully protesting Vladimir Putin’s inauguration as president for a fourth term.  In Moscow, people gathered at a non-sanctioned rally in Pushkin Square to hear Alexey Navalny, an anti-corruption activist, rail against the Kremlin’s assault on democratic freedoms before watching five police officers forcefully haul him by his arms and legs into a waiting van.

Despite the mass arrests, the anti-Putin crowd was a fraction of the one that had turned out to protest his inauguration 6 years earlier.  The Kremlin would cite the recent (sham) election results as evidence of Putin’s popularity.  A better explanation is that many Russians stayed home, fearful of another violent crackdown that had marred the 2012 protest in Bolotnaya Square.  In the aftermath of that protest, which ended in riot police violently attacking and arresting protestors, several of the demonstrators received unusually harsh punishments, including a 22-year-old student who received a two-and-a-half-year prison sentence for throwing a lemon at police officers.

But the state’s assault on civil liberties did not stop there. The Duma quickly passed legislation that imposed heavy fines for anyone caught participating in antigovernment protests. Election rules were changed to make it harder for opposition candidates to get on the ballot. Ownership and funding for non-governmental organizations, media and other websites were restricted.  In other words, Putin’s regime was sending an unambiguous message to anyone thinking about protesting: don’t.

Russia is part of a dangerous global trend of countries rolling back basic freedoms for opposition voices.  Leaders in China, Turkey, Venezuela, Mexico, and the Philippines either openly crackdown on dissent or fail to address the endemic impunity that allows criminals and corrupt officials to silence their critics through violence and intimidation.  It has created large pockets in these places where activists, journalists, and ordinary people have to think twice before doing their jobs or speaking out.

Since late 2016, at least 60 bills have been introduced in state legislatures that would limit the right to protest or remove liability for harm caused to protesters. While many bills have been defeated, nine states, including Iowa, North Carolina, South Dakota, Oklahoma, and Tennessee, have adopted measures that limit First Amendment activities.

Now, a new wave of bills based on a model promoted by ALEC, is being debated in Pennsylvania and Minnesota that aim to criminalize the process of planning environmental protests. If enacted, the act of simply planning a protest that might break a law, such as trespassing or other forms of non-violent civil disobedience, could be considered conspiracy to commit a criminal act.  This goes too far.

“The main motivation for these bills seems to be to deter would-be protesters and to make potential jail sentences and fines more draconian,” Alice Cherry, co-founder of the Climate Defense Project, told ThinkProgress.

Defending Rights & Dissent is part of a new coalition dedicated to helping local activists defeat these bills in their states. The coalition includes the Piper Fund, International Center for Nonprofit Law, National Lawyers Guild, Greenpeace and others. Thus far this year, local activists have defeated bills in Wyoming and Iowa, and are mounting significant challenges to bills in Minnesota and Missouri.

And just like in other countries, the attacks on protest is not limited to legislation.  The capricious prosecution of the Inauguration Day protesters (J20) is a jarring example that the government is not above using its power to intimidate those who speak out politically.

In the month following the Inauguration Day protest in Washington, DC, more than 200 people were indicted on felony riot charges which carries a penalty of up to 10 years in prison and a $25,000 fine.  Among them were journalists, nurses, and dozens of others who said they did nothing illegal and were simply swept up by police for being in the wrong place at the wrong time.

Before the trial started, prosecutors launched a sweeping search into the defendants’ personal lives, demanding vast amounts of information about their online activities, including which websites they visited, who their online “friends” were, and social media content.  It was an unprecedented move that was widely condemned as a direct attack on their First Amendment rights.

Even more troubling, prosecutors admitted during the trial that they had no evidence linking most of the defendants to any of the Inauguration Day vandalism.  So why were those people facing potential convictions that were punishable by a decade in prison?  To many, it appeared that they were being punished simply for being at the protest.

“What’s new about the J20 is not that a lot of people protesting got mass arrested, because we’ve seen that for decades. What’s alarming is that so many people were charged with felony conspiracy to riot, which is unprecedented,” says Traci Yoder, director of research and education at the National Lawyers Guild. “It seems like there was definitely an attempt to intimidate and frighten people.”

From the student led March for Our Lives to spontaneous demonstrations against the government’s proposed Muslim ban, and from Black Lives Matter die-ins to the water defenders at Standing Rock, Americans have shown a commitment to speak out on today’s pressing issues.

And just like those brave Russians who knowingly risked their freedom to protest injustice in their country, Americans must continue to remain vigilant and not be intimidated by efforts to suppress their voices here at home.