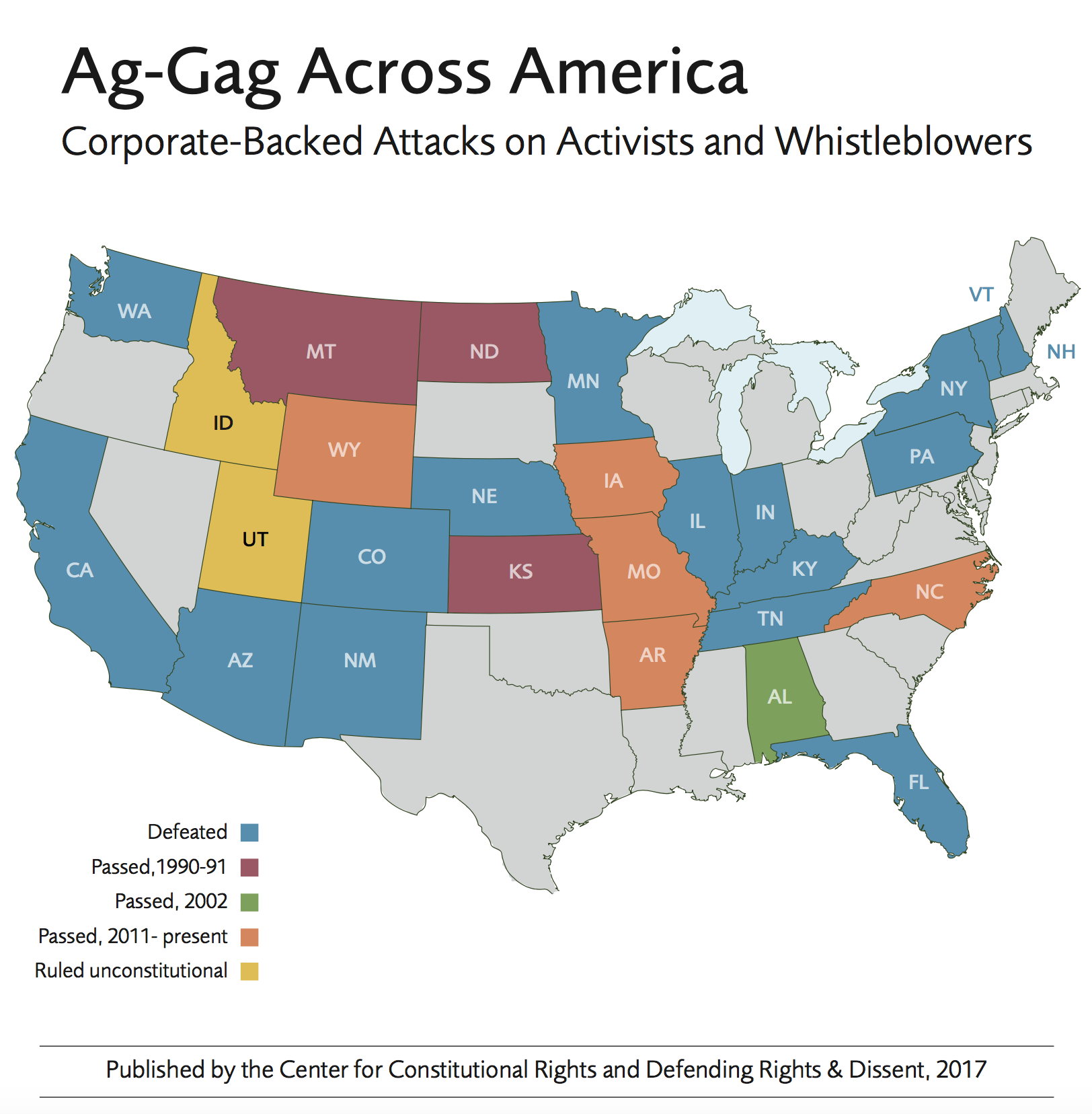 Attempts to insulate the agricultural industry from public scrutiny by using “ag-gag” laws suffered another major blow. On October 29, 2018, a federal judge ruled that two “Wyoming statutes which impose criminal and civil penalties for data collection on private land or when private land is crossed to reach public land without landowner permission” are unconstitutional. Ag-gag laws in Utah and Iowa have similarly been found to be unconstitutional in whole or in part.

As explained in Defending Rights & Dissent’s groundbreaking report on ag-gag laws (co-published with the Center for Constitutional Rights) Wyoming had a particularly unique ag-gag law:

In 2015, Wyoming passed a law criminalizing what legislators and lobbyists referred to as “data trespass,” the collection of resource data on open land with the intent to submit that data to a federal or state regulatory agency – for example, collecting water samples to test for the presence of E. coli bacteria in streams.

Non-professional, “citizen scientists” who collect data on pollution have played a vital role in the enforcement of the Clean Water Act. For example, in 2015, Dissent NewsWire interviewed citizen scientist Jonathan Ratner, who explained how he visited streams throughout Wyoming in order to test water samples and send the results to the Wyoming Department of Environmental Quality.82 E. coli is of particular concern in Wyoming, because the state is home to 1.3 million cows whose waste often makes its way into streams, creating a potential health hazard.

After an initial round of litigation against these two laws proved successful, Wyoming amended the legislation to strike the words “open land” and replace it with “private land.”

These changes notwithstanding, the plaintiffs continued to argue the statutes, even as amended, constituted a violation of the First Amendment and Fourteenth Amendment. A district federal judge rejected these claims, ruling that the amendments had cured the statutes of any constitutional defects.

However, on appeal the 10th Circuit Court of Appeals reversed the decision finding “ that plaintiffs’ collection of resource data constitutes the protected creation of speech” and remanded the case for reconsideration. Based on the finding that resource data constitutes protected speech, the trial judge found the ag-gag (or data trespass) laws violated the First Amendment.

The judge’s ruling may be read here.

Our report Ag-Gag Across America: Corporate-backed Attacks on Activists and Whistleblowers may be read here.