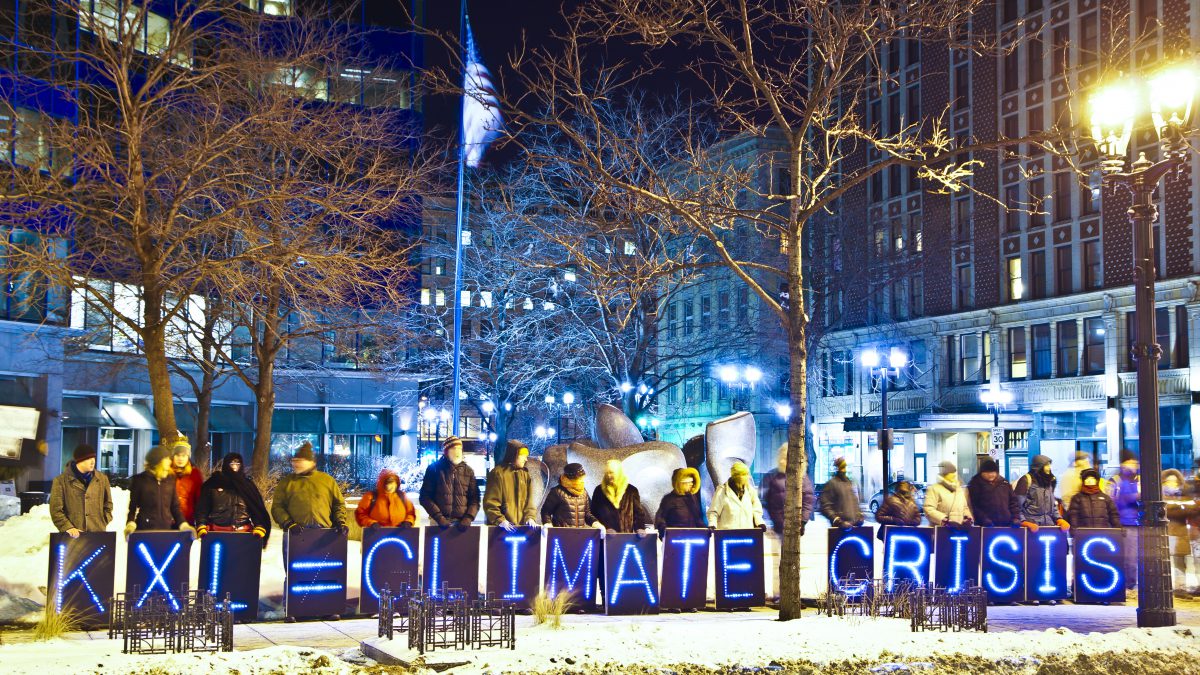 Wisconsin has a rich history of protest — on the UW Madison campus and off. But some in the state legislature want to change that. Two bills making their way through the state legislature target protests, and are part of the wave of anti-protest bills we’ve been fighting across the country since 2016. In Wisconsin, anti-pipeline protesters and student protesters are being singled out for draconian penalties.

Fourteen states have introduced bills to penalize students who protest speakers on campus. The Wisconsin version of the bill AB444, would codify a rule adopted by the University of Wisconsin two years ago by mandating a one semester suspension for students who twice disrupt a campus speaker, and expulsion for three such offenses. “As a result, rowdy protests in public areas of campus that, for instance, made it difficult to hear a speech, would be banned and its participants liable to penalties,” according to the International Center for Not-for-Profit Law. Governor Evers has vowed to veto this bill should it land on his desk.

Since the actions at Standing Rock in 2016 – 2017, nineteen states have considered bills to dramatically increase penalties against non-violent activists and organizations protesting sites deemed “critical infrastructure,” including pipelines, power plants, and more. Eight states have enacted such laws. In Wisconsin a Felony Trespass Bill (AB426/SB386) would make it a felony punishable by up to six years in prison and a $10,000 fine, to trespass on property owned, leased, or operated by companies engaged in the distribution of oil or petroleum. That’s already against the law of course, but the heightened penalties are designed to send a message to protesters.

A coalition of almost thirty groups sent a letter to the Wisconsin State Senate asking them to oppose the Felony Trespass Bill. The bill purports to protect worker safety and the private property rights of utilities and energy companies while simultaneously ensuring First Amendment freedoms. On the surface, these are goals that should and often do garner bipartisan support. However, Wisconsin lawmakers have failed to consider the broader implications of this bill, which does not accomplish those goals and instead aids energy companies by effectively stifling valid opposition through threats of felony convictions.

Members of the coalition testified at a Senate hearing yesterday. According to WORT, Bad River Tribe Chairman Mike Wiggins Junior argued that the bill was not meant to protect workers, but to protect fossil fuel industry profits.

“Over and over we’ve seen peaceful non-violent protests met with militarization, threats of violence, and actual violence from some of these corporate mechanisms, and really this bill sends a message and sends a dagger into First Amendment rights and the whole notion of peaceful, non-violent gathering. It steals Wisconsinites’ voices, it steals the voice of Mound people within our ancestral homelands and tribal boundaries to stand up for our land and water. The language in the bill actually [is] I’d say a giveaway of Wisconsin land and the granting of special property rights that don’t even exist for local municipalities and tribes.”

Philomena Kebec, Bad River tribal member and attorney who represents Native Americans of limited means in tribal and county courts, is concerned about the disparate effect that the felony trespass law may have on Native Americans and other racial minorities. She said,

“the trespass law requires no showing of intent to harm property or people for a felony conviction; instead, it operates to transform a simple trespass into a felony offense at the behest of a private company. These types of “status” offenses, like drug crimes that only require law enforcement to show that a person was in possess of a controlled substance, have had devastating impacts on Native American, black and brown communities. With these kinds of laws on the books, the implicit bias of law enforcement agencies, and now corporations, are unleashed to target Native Americans and others, for severe and life-changing legal consequences. In my community, on any given day of the week, Native American people constitute the largest demographic of jail inmates. If SB 386 is passed, I believe that it could worsen the situation and create unnecessary tension between the community and law enforcement.”

A resolution recently passed by the Sawyer County / Lac Courtes Oreilles Democrats opposes the passage of Senate Bill 386 (AB 426). Waldo Asp, co-chair explained, “after discussion the Bill was considered to not be necessary, divisive and redundant of other laws that already exist in the criminal codes of the State of Wisconsin regarding trespass and damage to infrastructure, buildings and equipment.”

Elizabeth Ward, Conservation Programs Coordinator for the Sierra Club Wisconsin, stated, “this bill attempts to create solutions for problems that do not exist, but creates a number of new ones. The bill opens up scenarios where peaceful protesters, landowners or tribal members could be arrested for trespassing and charged with a felony. Though those charges may be overturned, people could spend a lot of time, money, and energy fighting those unfair charges. Why pass a bill that opens up this possibility when it solves no other problem?”

Though it makes exemptions meant to protect protestors, the groups worry that this bill will have a chilling effect on protests, as has been seen in other states that have passed similar ALEC-inspired bills. Guy Reiter, Executive Director, of Menikanaehkem Inc stated, “this bill is just another example of the government trying to squelch peaceful protest. It’s another tactic used to try and silence water protectors.”

“The felony trespass bill just passed by the Wisconsin Assembly is an attempt to silence environmental and clean energy activists with the threat of felony charges for peaceful protest against pipelines and other energy infrastructure, including corporate headquarters. This bill would have a chilling effect on protestors and their freedom of speech and assembly. It would also have a disproportionate effect on Native American communities whose lands are affected by pipelines, oil, gas and mining projects. Is it just a coincidence that this bill is being pushed by the American Petroleum Institute at the precise moment when the Bad River Ojibwe Tribe are suing Enbridge and calling for the decommissioning of Line 5, which crosses their reservation?,” stated Al Gedicks, emeritus professor of environmental sociology at the University of Wisconsin, La Crosse and executive secretary of the Wisconsin Resources Protection Council.

The Felony Trespass Bill (AB 426 or SB386) is not only a threat to our democracy, it is an imminent threat to our people, land, water, and heritage as a state. Indigenous people and landowners in Wisconsin should not fear arrest on their own land for trying to protect and preserve it for future generations. The real crime here would be passing such a damaging and destructive bill that empowers fossil fuel corporations to further harm our health and threaten the lives of our residents. These same corporations are the most culpable for the climate crisis that threatens Wisconsin’s economic future and the livelihood of its people. We must not let this stand,” said Leah Qusba, Executive Director of the Alliance for Climate Education in Wisconsin.

Landowners who have easements with pipelines and other infrastructure covered in this bill have reason to be concerned. Some of these landowners have the pipelines as a result of eminent domain and now worry about the impacts of this bill on them or their guests. Mark Borchardt, founder of 80 Feet is Enough! and landowner along the Enbridge Line 61 pipeline corridor stated, “These bills always favor the pipeline companies. Would

someone please pass a bill to protect the rights of landowners who live everyday with these pipelines on their private property near their homes and families.”

“As a landowner living along the Enbridge pipeline right-of-way I have to wonder if an encounter I had with a brush-cutting crew- on my property without prior notification- this past March would now lead to felony trespass charges being filed against me. Would my minor confrontation with them about the workers urinating on my property and leaving behind a large pile of wood chips- which they brought over from a neighbor’s property- be grounds for being charged with “interrupting” pipeline operations under this bill? There are far too many similar possible scenarios and unanswered questions about how this bill would affect people’s rights and how it would be enforced for it to be considered for passage,” said Keith Merkel, member of 80 Feet is Enough! and landowner along the Enbridge Line 61 pipeline corridor.

Phyllis Hasbrouck, Wisconsin Safe Energy Alliance organizer, said “This bill could result in a landowner who was forced to accept a dangerous tar sands oil pipeline through their land, being charged with felony trespass for confronting pipeline subcontractors doing unauthorized damage to their land! The bill clearly states that it would be a Class H felony to trespass on ‘property owned, leased, or operated by energy companies engaged in the distribution of oil and petroleum.’ We call on Governor Evers to protect the property rights of WI residents and veto this bill that is being pushed by the American Petroleum Institute.”

“Despite its “first amendment exemptions”, this bill is designed to intimidate Wisconsin citizens from exercising their right to dissent, for fear of arrest and expensive legal defense costs. For example, our members could be charged with felonies for protesting the proposed Line 61-twin or Line 66, which would carry toxic tar sands oil through Wisconsin to the Gulf coast and export. The fossil fuel industry is pushing this bill to protect their billions of dollars of profits. It is essential that Governor Evers veto it if it is passed by the Senate,” explained Gail Nordheim, Co-Coordinator of 350 Madison.

Eric Hansen, founding member of Citizens Acting for Rail Safety- Milwaukee Chapter concluded that this bill could undermine the safety of communities, “Of course citizens want to monitor and assess the dangers of the oil industry expansion in Wisconsin. Common sense tells us that it is not a good idea to put dangerous materials such as crude oil in continual close proximity to valued waters, residents and infrastructure.Oil industry plans view Wisconsin as a major transportation corridor for crude oil and other dangerous materials. Oil pipeline expansions, the surge in hazardous oil trains passing through our towns and an attempt to establish an oil terminal in Port Milwaukee have serious implications.”