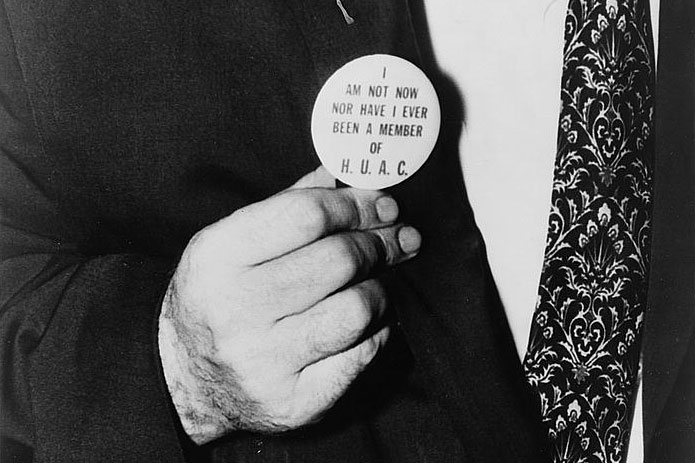 Political button reading: I am not now nor have I ever been a member of H.U.A.C. (i.e., House Un-American Activities Committee), distributed by the Chicago Committee to Defend the Bill of Rights. Source: Library of Congress

Would you ever criticize the actions of Congress? Would you write a letter opposing particular legislation? Would you sign a public statement asking others to do the same?

Would your answer to any those questions change if doing so meant you would be subpoenaed, hauled before Congress, and compelled to answer under oath what your intent was when you wrote your letter or what associations you belonged to at the time?

The chilling effect of allowing Congress to investigate ordinary citizens who criticize its actions should be clear. But 59 years ago today, the Supreme Court decided two cases that touch on this very issue. And their decision may disturb you.

It was 1958 when the notorious House Un-American Activities Committee (HUAC) announced it would hold hearings in Atlanta, Georgia. Ostensibly, these hearings were meant to investigate Communist “colonization” of the textile industry, Communist Party activity in the South, and the distribution of “foreign” Communist propaganda in the South.

Many Southern activists, however, feared these hearings had another target in their sites–civil rights activists. Responding to these real fears, over 200 African-American leaders sent a letter to Congress asking them not to allow HUAC to convene in Atlanta, as doing so threatened the Civil Rights Movement. During this same timeframe, Carl and Anne Braden, two field secretaries of the civil rights group the Southern Conference Education Fund, sent a public “dear friend” letter asking people to write to their member of Congress and oppose legislation they felt threatened civil liberties.

HUAC decided that the only reason people could oppose them coming to the South was that they were Communists or that they were dupes of the Communists. Members of HUAC decided that Carl Braden, a white activist, was in fact behind the letter sent by African-American leaders opposing their hearings. Faced with a critic, they subpoenaed him to appear before the hearing. The marshalls served this subpoena on Braden while his was vacationing at the seaside New England home of Harvey O’Connor, who was Chairman of the Emergency Civil Liberties Committee.

Braden, faced with this witch hunt requested the help of anti-HUAC activists. Frank Wilkinson, then with the Emergency Civil Liberties Committee, went to Atlanta to support the Bradens. One day after arriving a funny thing happened. HUAC, having learned of Wilkinson’s presence in Atlanta, issued a subpoena for him too. Wilkinson who had never been a textile worker and who had never even been to the South before, was being compelled to testify before a hearing supposedly about Communist activities in Southern textile industry!

Neither Braden nor Wilkinson were strangers to this kind of repression. Carl Braden had been a journalist, trade union activist, and supporter of Henry Wallace’s 1948 bid for President. In 1954, Carl along with his wife Anne, purchased a home in a segregated Louisville, Kentucky neighborhood. They then turned around and sold the home to the Wades, an African-American family, as they had intended all along.

There was massive outrage, the Wades’ home had crosses burned in its lawn and was even dynamited, and the Bradens were arrested–for sedition. The prosecution argued that the Bradens were Communists, and that by purchasing a home for an African-American couple in an all-white neighborhood, they were deliberately inciting unrest that would lead to the overthrow of the governments of Kentucky and the United States. Carl was tried first. He was convicted and sentenced to fifteen years in prison. As a judge read out the sentence, a spectator yelled out, “He should be lynched!” His sentence was later overturned on appeal.

Wilkinson had joined the Communist Party in the early 1940s. He also worked at the Los Angeles Public Housing Authority. In the 1950s, he was working on a public housing project in an area known as Chavez Ravine. Wilkinson’s vision of building an integrated, affordable housing on prime real estate incurred the wrath of both the FBI and local developers (who had a different vision for that property). The FBI leaked information about Wilkinson’s political beliefs to developers. While testifying as an expert witness in an eminent domain proceeding, lawyers for local developers began questioning Wilkinson about his left wing political associations. As these questions were irrelevant to the proceedings and as a matter of conscience, Wilkinson refused to answer them. The judge had Wilkinson impeached as a witness and the City Council asked for the Housing Authority to be investigated. Wilkinson was fired and called to testify before both the California State Senate Committee on Un-American Activities and HUAC. Wilkinson declined to answer questions about his political affiliations citing his First Amendment rights. The city would go on to build Dodgers Stadium, instead of public housing in Chavez Ravine. As a result of his stance, Wilkinson became a nationally known opponent of HUAC.

On July 30, 1958, when the two HUAC critics were forced to testify in Atlanta they were predictably not asked about textiles, but their opposition to the committee. Braden refused to answer at least five separate questions on the grounds they were not pertinent to the hearings and violated his First Amendment rights. These questions dealt almost exclusively with his opposition to HUAC and only one had anything to with the Communist Party. He was asked about his involvement with the Southern Conference Education Fund, the Emergency Civil Liberties Committee, and Harvey O’Connor. He was asked if he had been a member of the Communist Party at the time he signed the letter urging people to write their members of Congress. And he was asked about the “Southern Newsletter,” a publication he had no record of involvement with and which his inquisitor could not describe beyond that it was folded like a pamphlet. Braden faced five counts of contempt for his refusal to answer each of the five questions.

Both men were convicted at the trial level, but they appealed their cases all the way to the Supreme Court. In the interim, the Supreme Court would hear a separate case brought by  Professor Lloyd Barenblatt. He refused to answer HUAC’s questions about whether he was a Communist, citing the First Amendment. Like Wilkinson and Braden he was convicted of contempt. A sharply divided Court ruled against Barenblatt in a 5-4 decision. The Court found such questions were permissible so long as they had a legislative purpose or were part of protecting important government interests. The Court’s majority treated being a Communist as synonymous with plotting the overthrow of the government and argued the government’s right to defend itself was an important interest.

As a result, lawyers for Wilkinson and Braden had an uphill battle. While their attorneys thought Barenblatt was wrongly decided, they argued that the facts in these cases were distinctive enough that even under Barenblatt’s precedent, Wilkinson and Braden should prevail. Wilkinson’s and Braden’s lawyers, who argued their respective cases on the same day, asserted that far from having a legislative purpose the questioning of Wilkinson and Braden wasn’t even pertinent to the stated purpose of the hearing. Lawyers in both cases stressed the retaliatory nature of the subpoenas. Wilkinson wasn’t even asked to testify until after he arrived in town for the hearing. HUAC had no reason to think Braden was connected to the Emergency Civil Liberties Committee other than that marshals found him on vacation at Harvey O’Connor’s home. Further, Braden’s attorney argued that even if the Communist Party could be treated as synonymous with overthrowing the government, by focusing on the Southern Conference Education Fund or the Emergency Civil Committees, which argued cases before the Supreme Court, HUAC had well surpassed what case law would allow.

During oral arguments for Braden, Chief Justice Warren asked the government’s lawyers if it was the government’s position that it was okay for Congress to investigate people for writing letters to Congress or encouraging others to do the same. The government, realizing the sweeping and problematic nature of their argument, tried to backtrack. Still, they maintained that HUAC had a right to know if those organizing or inciting opposition to proposed “internal security” bills or HUAC itself, were part of a Communist plot.

Nonetheless, in both cases the court ruled five to four against the two men. Frank and Carl served nine months in prison, but not before being given a send off by Martin Luther King, Jr. King had campaigned for their clemency, as, like Braden he understood the purpose of HUAC’s inquiries in the South to be aimed at destroying the Civil Rights Movement.

Wilkinson, Braden and O’Connor would go on to found the National Committee to Abolish HUAC, which eventually became Defending Rights & Dissent.