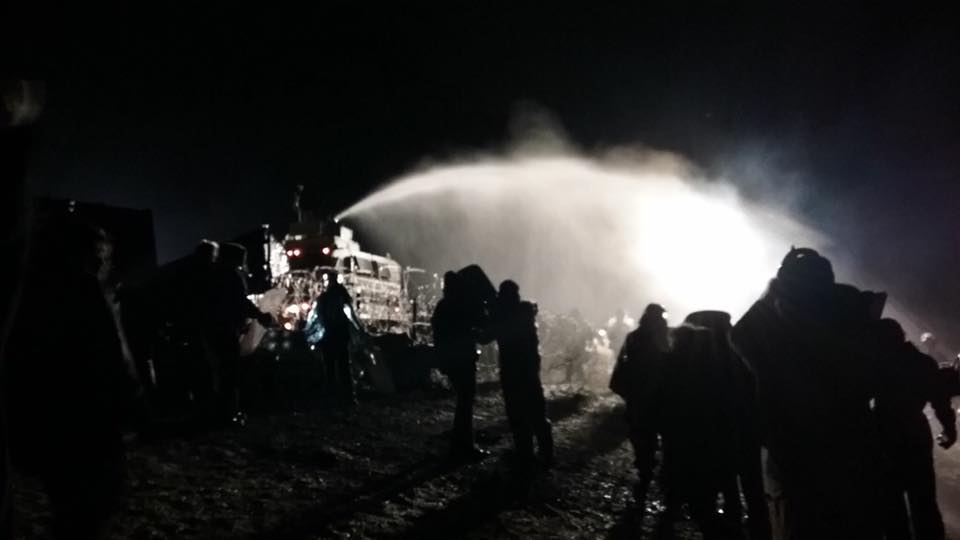 Bismarck, ND — Today, the Water Protector Legal Collective (WPLC) in collaboration with the Indigenous Peoples Law & Policy Program at the University of Arizona’s Rogers College of Law, submitted a report to the Office of the High Commissioner for Human Rights (OHCHR) and the Inter-American Commission on Human Rights (IACHR), showing violations of Indigenous peoples’ rights while protesting fossil fuel industry projects. The OHCHR and IACHR have called for input on human rights defenders in the Americas.

The report documents illegal treatment of water protectors by law enforcement and courts. It charges this conduct as violations of constitutional and human rights law. The report calls for government accountability and drastic changes in U.S. practices towards Indigenous environmental protectors and their supporters.

“We are calling on the UN OHCHR and IACHR to urge the US to uphold its legal obligations to ensure the rights of indigenous peoples to speak out against the climate and environmental destruction that threatens us all.”

WPLC facilitated defense for 841 people who were arrested in pipeline protests at Standing Rock in North Dakota. All of the cases were prosecuted but of the 836 state court cases, prosecutors obtained only twenty-two convictions, with more than half the state criminal cases dismissed or acquitted at trial. Five Indigenous water protectors are serving federal prison sentences or are on supervised release.

The report details unlawful law enforcement abuse of nonviolent protesters. The police violence has included using high pressure fire hoses in freezing temperatures, shotgun-fired munitions, and chemical weapons causing severe injuries; suspicionless mass arrests; and harsh jail conditions. The report discusses an alarming trend of “critical infrastructure bills” being pushed through by the oil and gas industry, which criminalize environmental protest with up to twenty years in prison, aimed at suppressing the growing anti-fossil fuel movement in which Indigenous people and nations have played a central role.

The OHCHR is the leading UN body charged with protecting human rights worldwide. The IACHR is an independent agency of the thirty-five nation Organization of American States. It monitors human rights violations in the Americas and investigates complaints.

The report highlights testimony of Indigenous water protectors at an IACHR hearing held in May in Kingston, Jamaica. Casey Camp Horinek, councilwoman for the Ponca Tribe of Oklahoma, shared her experience while on unceded Sioux tribal land on October 27, 2016.

“Our people stood or sat in prayer…None of us were armed with anything more than our prayers and Sacred Pipes and Eagle Feathers Staffs…We were pepper sprayed in our faces, struck down, tased, then hands zip tied behind us, thrown to the ground and eventually 142 of us were taken by bus to jail.”

“On October 27, 2016, I was tackled from behind and brutally arrested without probable cause and accused of having a gun. The only gun that was brought into the camp was brought by Heath Harmon, [who I later learned was] an FBI informant. He started a dishonest relationship with me. It was his gun that I was accused of possessing.”

The US sent several representatives to the May IACHR hearing. The WPLC report responds to the government’s claims there, delineating the failure to protect Indigenous environmental defenders from human rights violations, and its failure to consult Indigenous nations on extractive industry projects which encroach on Indigenous lands, and failure to comply with existing US laws and treaties.

“The United States should be protecting Indigenous peoples from all forms of violence; including the use of excessive force by police and private security. Without accountability for the harms which have occurred in Standing Rock the US sets a dangerous standard where colonial legacies of violent resource extraction continue.”

WPLC is a Native led nonprofit organization that provides criminal and civil legal representation to Indigenous and other people engaged in Native led environmental actions affecting Native land. Originally formed during the Dakota Access pipeline protest in Standing Rock, WPLC now advocates on behalf of Water Protectors across the country.