It’s Constitution Day! It’s only as strong as the will of the people to demand our rights. 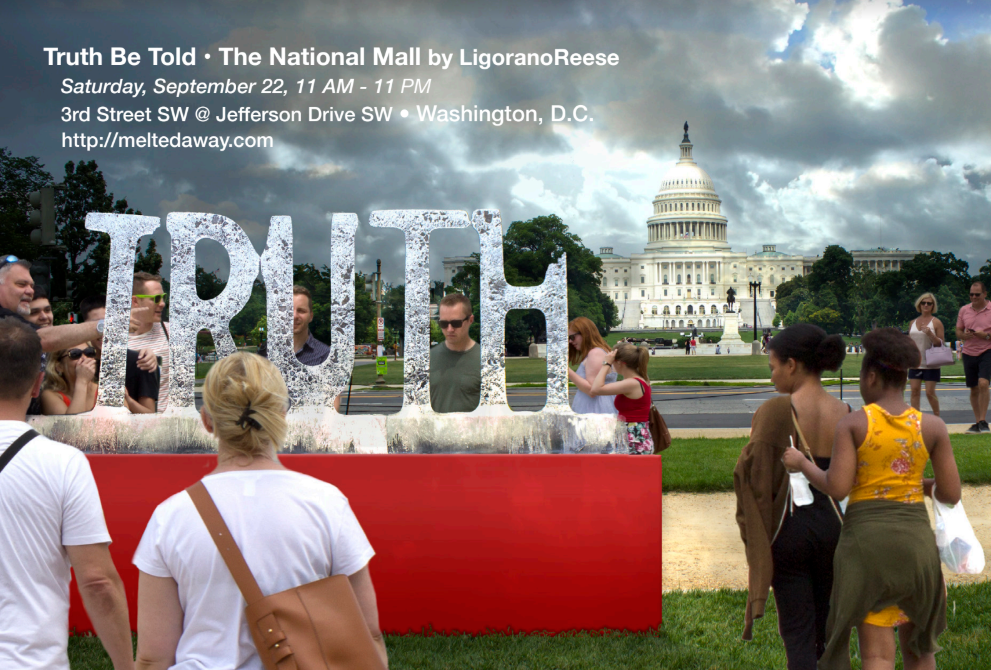 Join us for a remarkable series of events in DC September 21-23!

All events are free and open to the public. Tickets are recommended for the panel discussion on Sunday (available for free here)

DRAD has teamed up with PEN America, the Corcoran School of Art and Design and artists Nora Ligarono and Marshall Reese to host a weekend of For Freedoms programming as part of a 50 State Initiative in which concurrent decentralized public events across the country will reflect a multiplicity of voices and spark a national dialogue about art, education, commerce, and politics.

Saturday, September 22
11 am until the sculpture melts
Truth Be Told
National Mall at 3rd St

Nora Ligorano and Marshall Reese unveil a massive, melting 2,000-pound sculpture carved in ice of the word TRUTH. The artists reflect on what we are losing and claim space for the public to question the impact of contesting truth on the political landscape. Poets and artists will be ‘in residence’ as the ice melts to perform and comment.

Join us for a panel that includes artists and activists for a powerful discussion about responses and tactics for engaging civil society in the quest to uphold truth. RSVP and share on Facebook

When belief supplants truth, what do we do? We are experiencing a transformation of social values and semantic meaning floating away from concrete measure, assessment and valuation of truth. Private gatekeepers and public officials, #fakenews, and journalism under attack will be discussed with a panel of whistleblowers, artists, and journalists.

Chip Gibbons is an expert on US Constitutional law, a journalist, and a longtime activist. As a journalist, Chip writes about civil liberties and social movements, both from a historical and a contemporary perspective. His work has been published in The Nation and Jacobin, and he contributed a chapter to The Henry Kissinger Files (forthcoming, Verso Books).

Danielle Brian has been the Executive Director of the Project On Government Oversight (POGO) since 1993. POGO is a nonpartisan government watchdog that exposes waste, corruption, and abuse of power in order to achieve a more effective, ethical, and accountable government that safeguards constitutional principles. Danielle was inducted into the Freedom of Information Act Hall of Fame, has been ranked three times by Ethisphere magazine as one of the top 100 most influential people in business ethics, and received the Smith College Medal. She received her Bachelor’s Degree from Smith College, and her Master’s Degree from Johns Hopkins SAIS.

Thomas O. Melia is Washington Director for PEN America, an organization that stands at the intersection of literature and human rights to protect open expression in the United States and worldwide. He is also a writer and visiting professor at Princeton University. During the Obama administration, Melia was Deputy Assistant Secretary of State for democracy and human rights, and Assistant Administrator of the U.S. Agency of International Development.

Nora Ligorano and Marshall Reese collaborate together as LigoranoReese. They have exhibited public artworks, internet projects and limited editions throughout the United States, Latin America and Europe. TRUTH BE TOLD is the first temporary monument installed in Washington, D.C.

TRUTH BE TOLD – AMBIENT from LigoranoReese on Vimeo.