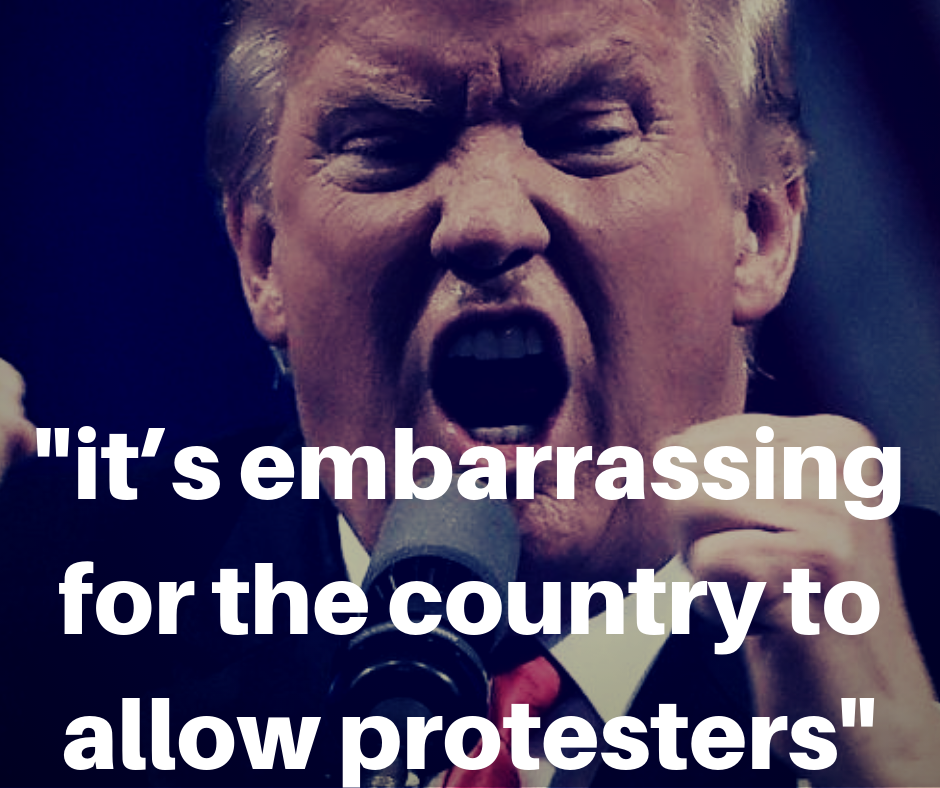 Do you think it’s embarrassing that our country “allows” protests?

As an organization that has defended the right to protest for nearly six decades we don’t think so. And I know you don’t think so either.

But Donald Trump does. He said:

“I think it’s embarrassing for the country to allow protesters. You don’t even know what side the protesters are on. In the old days, we used to throw them out. Today, I guess they just keep screaming.”

Let Trump know you support the right to protest by donating to Defending Rights & Dissent today.

Trump was referencing the protest against his Supreme Court pick Brett Kavanaugh. But those protesters were “thrown out” of the hearing and, in fact, seventy people were arrested.

The only embarrassing thing are Trump’s words.

More than embarrassing, Trump’s attitude is a green light to officials across the country who want to crackdown on free speech. With Trump at the helm everyone from the local sheriff to state legislatures are heeding the call and coming out of the woodwork to eviscerate your civil liberties.

We’re fighting back like we’ve always done. We are working with grassroots activist who want to fight against local anti-protest laws. We are standing with whistleblowers who are being persecuted under the draconian Espionage Act. We’re fighting programs that label racial justice and human rights activists as terrorists. And we’re continuing to monitor and raise the alarm about law enforcement spying on social movements.

Defending Rights & Dissent isn’t just our name, it’s what we do every single day.

But we can only do it with your help.

With a President who openly boasts of his contempt for dissent and a tidal wave of repression engulfing the nation,we need your help more than ever.

Please stand up to Trump today by donating to Defending Rights & Dissent. Let Trump know that protests are vital to our democracy, not an embarrassment to be outlawed.