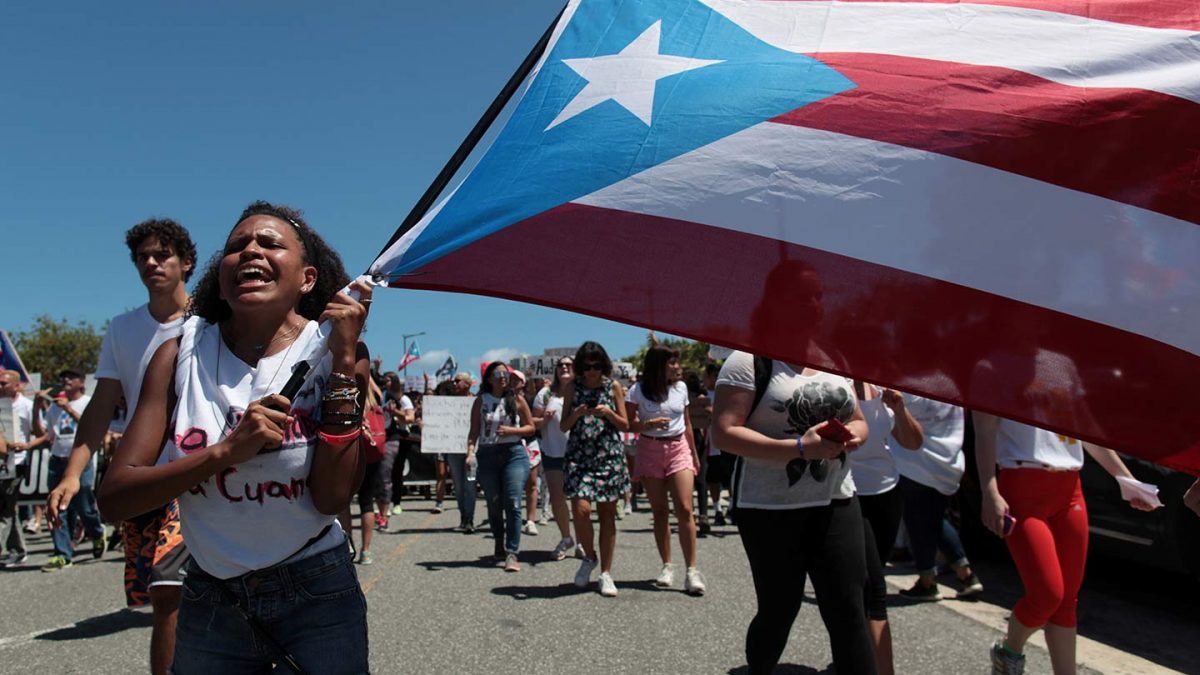 In April of 2017, students at the University of Puerto Rico (UPR) were on strike to protest austerity policies being pursued by the Puerto Rican government to pay their bondholders. On April 27, 2017, the Board of Directors of the UPR were meeting to discuss $241 million in cuts to the university system. When the students’ leaders demanded to speak to the Board, the Board refused and locked them out. In response, dozens of students stormed the meeting room and demanded that the Board sign a pledge to reject the proposed funding cuts.

The protest action by the students was over in less than half an hour and was streamed live on Facebook by three student media outlets. Diálogo UPR, Pulso Estudiantil UPR, and Centro de Comunicación Estudiantil.

Two weeks after the April 27th demonstration, seven students who had assumed leadership roles in the wider demonstrations that took place on May 1, 2017 received citations ordering them to appear in court in connection with the incident. They were charged with a host of crimes related to the boardroom protest (though the most severe ones — rioting and burglary — were later dropped.) The remaining charges, which included violating the right to assemble, aggravated restriction of freedom, and violence or intimidation against a public authority, each carried between six months and three years in prison.

On May 5th (following the May 1st protests over austerity measures that brought thousands into the streets) a cybercrime agent submitted a warrant request, for the following items related to the earlier April 27th protests: content exchanged, both privately and publicly, via Facebook, including complete chat registries, information from the account managers on the searches that were conducted, digital images posted, and content deleted. The agent also requested phone numbers and email and physical addresses associated with the accounts, and records of bills and payments, as well as metadata, including the dates and times the accounts were accessed, the GPS coordinates of posts, browser types, IP addresses and cellphone IMSI numbers. The copy of the search warrant provided to defense attorneys does not include the page describing which of the items requested the judge approved, but attorney Márisol Sáez Matos, one of the attorneys representing the student demonstrator defendants, believes that the request was granted in full.

Defense attorneys for the student demonstrators believe that the case was not really about the boardroom protest, but instead was an attempt to intimidate the leadership of the student protest movement.  Out of the dozens of students who took part in the April 27th action only the seven student leaders were charged. All seven were members of the student strikers’ negotiating committee and of political organizations critical of the government’s austerity measures.

The 2017 warrant amounted to a blanket petition by the government to spy into the private lives of citizens who were only exercising their constitutional rights. These events have disturbing similarities to an illegal surveillance program carried out by the Puerto Rican Police Department during the 1960’s and into the 1980’s. During this period, and with the knowledge of the FBI, Puerto Rico’s Police Department operated an intelligence unit that compiled dossiers (“carpetas”) of anyone suspected of supporting the local independence movement, as well as supporters of environmental and labor causes.

The existence of the carpetas was revealed only after the police execution of two UPR students and an unsuccessful cover up of the incident (later referred to as “Cerro Maravilla” and “Puerto Rico’s Watergate”). The ensuing investigations revealed that law enforcement held active files on more than 75,000 people and led to a 1988 judicial decision declaring the program unlawful and granting thousands of Puerto Ricans the right to request their “carpeta” from the government.

The issue of the government’s invasion of people’s privacy is not likely to go away. While the cases against the students were recently dismissed by the Tribunal de Primera Instancia who cited violations of the due process rights of the accused (namely their right to a speedy trial) the narrow ruling means that issues pertaining to whether the Department of Justice violated the constitutional rights of Puerto Ricans through their broad information gathering were left untouched.