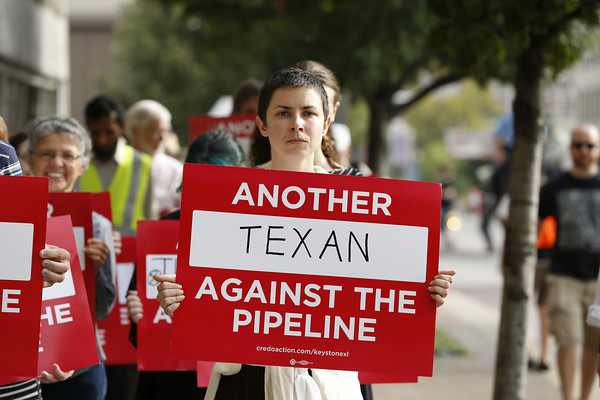 On Friday, June 14, Texas Governor Abbott signed into law a draconian measure to increase fines and prison time for civil disobedience actions at pipeline and other so-called “critical infrastructure” sites.

“With his decision on HB 3557, Governor Abbott showed he cares more about interests of powerful polluting interests than the Texans who are working to defend their families, communities and property from harm. This law will mean that simply kneeling to pray in front of construction equipment that is putting a pipeline through your land could make you a felon and throw you in prison for up to two years. This legislation was designed by powerful polluting special interests to scare Americans into staying quiet about the devastation of our environment, the desecration of sacred spaces, land theft, and the violation of sovereign treaty obligations. We will continue to work to stand up for free speech, and we will work to hold all those who stood with special interests over the civil liberties accountable in the months to come.”

Robin Schneider, Executive Director of Texas Campaign for the Environment

HB 3557 is the Texas version of model legislation developed by the American Legislative Exchange Council (ALEC) in response to the Dakota Access Pipeline protests and other oil and gas-related demonstrations in recent years. The bill adds significant criminal penalties to any protest activity which destroys facilities, or impairs or interferes with the operations of “critical infrastructure.”

“HB 3557 is a fear tactic to dissuade environmental justice movements like Standing Rock from challenging the continued use of fossil fuels,” stated Society of Native Nations Campaign Manager Jennifer K. Falcon. “We are at a tipping point as our ecosystems decline at accelerated rates and instead of protecting our environment, we are protecting big oil and pipelines. Across the country, we have seen these bills challenged for stripping us of our constitutional rights, Society of Native Nations will not be silenced and plans to fight these bills every step of the way,”

“The passage of this horrendous bill is indicative of the rigged state government of Texas. The oil and gas industry is a monster, shepherded by Governor Abbott and jointly guilty of blocking needed change for the sake of profit. Historians will look back at this industry and the tX state gov and declare – they were the criminals.”

“Bills like HB 3557 should be a wake-up call that our legislators will choose corporate protection and profits over the constitutional rights of its citizens. Even those lawmakers who proclaim to be on the right side of environmental justice are positioning themselves on the wrong side of this struggle. While we welcome amendments that lessened the severity of this bill, any chipping away of our rights is unacceptable and we will continue to fight this for the long haul.”

“It is unfortunate that people who have no knowledge of Native History in Texas can decide the definition of those original people that protect their Tribal lands and Tribal identities from colonial ethnic cleansing. We as the Original refuse to give consent to the ongoing genocide of the original people’s humanity and the travesty of the lands that are stolen by politicians.”

“The powerful oil and gas lobby typically gets what it wants out of the Texas Legislature, so it was harder than it needed to be to convince our lawmakers that someone chaining themselves to a tree at a pipeline construction site is not the same as destroying a pipeline,” said Cyrus Reed, Interim Director of the Sierra Club’s Lone Star Chapter. “I just wish the same concern for safety and security several lawmakers showed transferred to bills that would have addressed the lethal but preventable accidents, leaks, and explosions we see in Texas year after year.”