Tell the FCC to Rein in Police Abuse of Stingray Technology

Bill Headed to Governor’s Desk in California that Chills Speech

One American City Took on the Surveillance Society – and Won.

Tell the FCC to Rein in Police Abuse of Stingray Technology 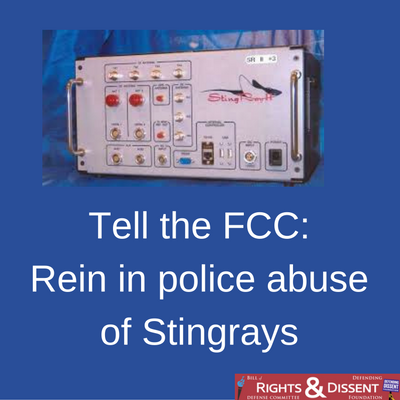 They are known as Stingrays, cell site simulators or IMSI catchers, but we’ll call them Stingrays. They can locate and track you, eavesdrop on your calls, and disrupt interactions between protest organizers. They do this by pretending to be cell phone towers, and tricking your phone into communicating with it, rather than a legitimate tower.

They are used by police all over the country but perhaps nowhere more vigorously than in Baltimore, where the Baltimore Police Department (BPD) admitted to using Stingrays thousands of times. Not only have police regularly used Stingrays without bothering to get a warrant, but they have also concealed the power of the technology from judges and defense lawyers.

Now, three advocacy groups are using a new strategy to combat police use of this powerful surveillance technology. Based on the fact that Stingrays interfere with cell phone service the Center for Media Justice, Color of Change, and the New America Foundation’s Open Technology Institute have filed a complaint with the Federal Communications Commission, which regulates cell phone service. They are asking the FCC “to put an end to widespread network interference caused by rampant unlicensed transmissions made by BPD and other departments around the country.” (Read the full complaint here).

You can support this complaint by signing this petition to the FCC.

When police use Stingrays for surveillance, it has unintended consequences, including disrupting 9-1-1 service. Because the BPD have used Stingrays more often in Baltimore’s Black neighborhoods, these neighborhoods are most likely to suffer from disrupted emergency service.

Of course, the surveillance itself also disproportionately affects Baltimore’s Black residents as the complaint notes:

New technological tools that amplify police power can amplify existing biases in policing. Lack of effective oversight and supervision . . . in the use of this technology may lead to even greater invasions of privacy and subversions of rights in communities of color that are already the targets of biased policing.

This diagram of where BPD has deployed Stingrays makes clear the disparate effect on Black neighborhoods. 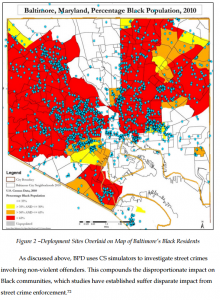