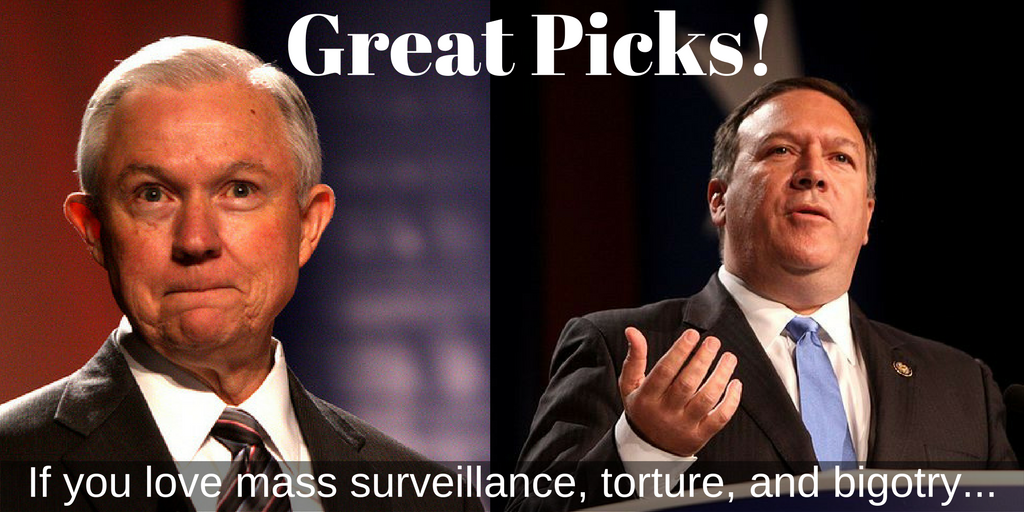 Trump’s nominees for Attorney General (Jeff Sessions) and CIA Director (Mike Pompeo) are disastrous. They are both apologists for torture, greedy for more mass surveillance, and ready to hold all Muslims responsible for the crimes of a few.

Take Action: Call your Senators to tell them to oppose Sessions and Pompeo

Hearings are set this week for both men. Sessions will come before the Senate Judiciary Committee on January 10 – 11, and the Senate Intelligence Committee will consider Pompeo’s nomination on January 11.

I am a constituent of Senator ____, and I am calling to ask him/her to oppose the nominations of Jeff Sessions for Attorney General and Mike Pompeo for CIA Director. [It is optional to give a reason why, in general the staff person will not record your reason. You can explain your concern about their support for unconstitutional policies including torture, mass surveillance and hostility toward equal protection for racial and religious minorities, or other concerns you may have.]

Please click here to let us know you made the calls!

Why do we oppose Jeff Sessions?

Jeff Sessions not only supports the PATRIOT Act, he has voted against even moderate reforms to that law’s most egregious provisions, and has actually proposed expanding it to allow the FBI even more access to our personal information without a warrant. He supports the death penalty and opposes criminal justice reform, supports the War on Drugs, takes a hardline not only against undocumented immigrants, but immigration in general. Read more here.

Why do we oppose Mike Pompeo?

Mike Pompeo supports torture, wants to expand unwarranted mass surveillance, approves of the prison at Guantanamo, and has said Snowden deserves the death penalty. He supports draconian war on terror policies, and frames it as a war between the west and radical Islam, and has suggested that Muslim leaders who do not speak out against Islamic extremism are responsible for terror attacks. Read more here.