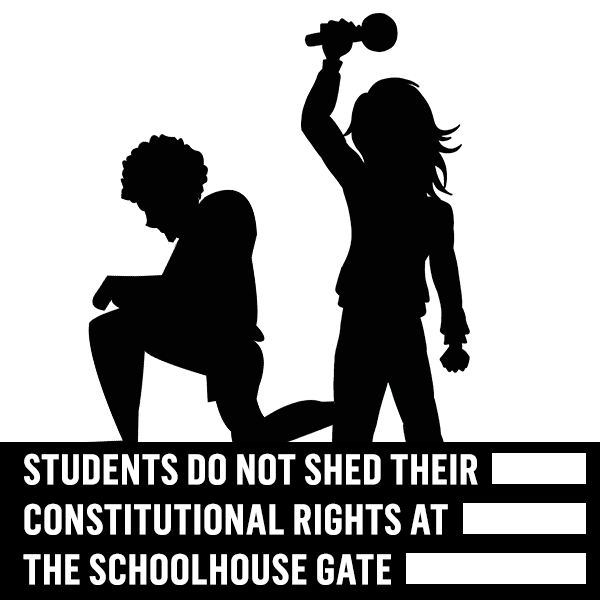 The National Coalition Against Censorship and the Comic Book Legal Defense Fund issued a statement yesterday afternoon on the arrest of the 11-year-old who refused to stand for the Pledge of Allegiance. Defending Rights & Dissent and others have joined the statement:

A coalition* of free expression advocates are alarmed to learn that an 11-year old student was arrested after exercising his lawful protest in Polk County, Florida. As we mark the 50th anniversary of Tinker v. Des Moines, our most celebrated and cited case protecting the core right to speech in school, we are disturbed by the total disregard for this student’s rights demonstrated by his teacher and school officials, ultimately resulting in extraordinarily harsh and discriminatory punishment.

Dissent and disagreement are neither violent nor inherently “disruptive.” We remind all school boards, administrators and educators that protest, political dissent and freedom of expression are protected rights for all students.

A free and fair society requires tolerance for diverse views and the freedom to express them. The Supreme Court affirmed in West Virginia v. Barnette (1943), and again two decades later in Tinker v. Des Moines (1969), that young people of all ages are entitled to express their political views in schools. The Court made clear that “educating the young for citizenship is reason for scrupulous protection of (their) Constitutional freedoms,” including the freedom to choose not to stand for the Pledge of Allegiance.

While schools should encourage students to practice articulating the reasoning behind their opinions, it is blatantly unconstitutional for teachers to suppress students’ views simply because they disagree, or to punish students for expressing those views. Recent unconstitutional punishment of student dissent includes suspensions and expulsions for kneeling during the National Anthem and participating in last year’s National Student Walkout to protest gun violence. That this latest incident resulted in a child’s arrest demonstrates the dire consequences of disregarding students’ rights. The lifelong impact of institutional discipline, particularly juvenile detention, on children is well-documented.

We encourage schools to share resources like NCAC and CBLDF’s short comic on student protest rights, NCAC’s in-depth look at First Amendment rights in schools and the ACLU’s rights guide with all teachers and staff to ensure that they understand their responsibilities to respect their students’ rights and to help them become active and informed citizens.

A resource for student journalists covering controversies in their schools is available from the Student Press Law Center.

National Council of Teachers of English

Center for the Study of Institutions & Innovation, University of Wisconsin-Stout