Groups to Congress: Put Police Militarization On Hold and Do Some OVERSIGHT! 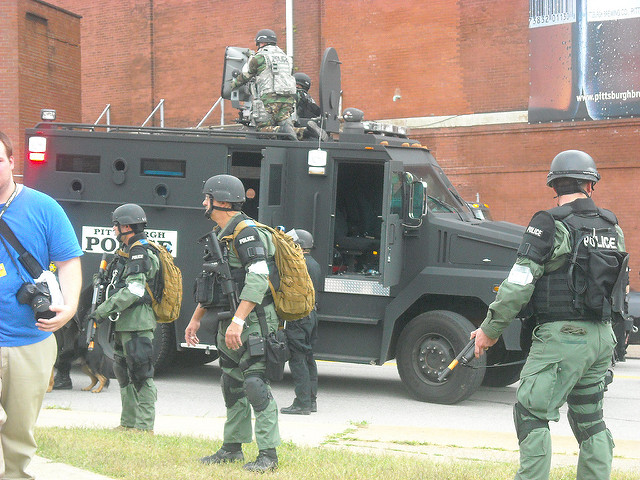 Amidst the daily fire and fury beaming from the White House are two seemingly unrelated stories that should not be overlooked.  The first was an executive order that reverses the ban on local police departments from using federal funds to acquire military-grade equipment.

This action, Attorney General Jeff Sessions assured the national Fraternal Order of Police in Nashville on August 28, will “ensure that you can get the lifesaving gear that you need to do your job.”  Lifesaving police gear like tanks, grenade launchers and 50-caliber guns, which had only been available for purchase with state and local funds after clashes between law enforcement and protesters in Ferguson, Missouri prompted President Obama to halt the federal program in early 2016.

The other story involves the bizarre report that an acoustic weapon may have been used to attack and seriously injure several U.S. and Canadian diplomats in Havana, Cuba. While few details about the attacks are known, the State Department confirms that at least 19 embassy employees have been harmed, with some complaining of hearing loss and brain swelling.

Sonic weapons are just one of an array of sophisticated technologies that trace their origins to a battlefield but are employed against civilians.  Israeli forces reportedly used The Scream, a device that emitted “a special frequency that targets the inner ear” on Palestinian demonstrators in 2005, an incident that is widely believed to be the first known use of acoustic weapon on civilians.

While the case in Havana is still a mystery, there are several confirmed reports of an acoustic weapon being used by police against protestors in the U.S. The first reported domestic use of a Long Range Acoustic Device sound cannon, or LRAD, was during the G20 protest in Pittsburgh (video) in September 2009.

An LRAD device is acoustic weapon designed to disperse crowds or disable a hostile target. It creates bursts of loud, irritating sounds that can be dangerous enough to cause permanent damage.  It was originally developed by military contractors in response to the October 2000 bombing of the USS Cole, but has recently seen action on American streets.

Police in multiple states have used them at protests organized by Black Lives Matter and it made an appearance during the white nationalists rally in Charlottesville.

“It feels like your eardrums are beating out of your head,” photojournalist Shay Horse told Vice News after being blasted with a sonic weapon during a march for the killing of Eric Garner in New York City.  “I heard the ringing for about a week.”

Along with rubber bullets, tear gas, and gas grenades, hundreds of people at Standing Rock last October were exposed to a LRAD device while protesting the Dakota Access pipeline.  Some reports indicated that the device disrupted medial responders from reaching or treating the injured.

The repurposing of military-grade weaponry by your local PD is a little noticed byproduct of a muddled foreign policy that perpetuates conflict and normalizes violence against civilians.  It also encourages police departments to spend lavishly on gratuitous military grade equipment for everyday police work.

Police departments in Ohio, currently prohibited from acquiring military equipment until 2018 for violating the federal program’s rules, had previously ordered and received mine-resistant ambush-protected (MRAP) vehicles and toolkits to fix F16 jet fighters. “We don’t even have an F-16. I don’t know why these guys would even get that,” said Columbus Police Lt. Dave Hughes.

Protestors exercising their First Amendment rights should not have to face militarized police officers dressed and armed like soldiers.  Or be subjected to dangerous new technologies like acoustic weapons of questionable legality.

When President Trump unveiled his recent plan to escalate the 16-year war old in Afghanistan, he wittingly, or otherwise, continued the importation of the military ethos to our cities and streets.

Providing law enforcement with military-grade equipment produces a dangerous, warrior mentality that encourages more aggressive policing at times when restraint and tension-easing tactics are needed. Military equipment is designed to be used against an enemy, so if local police are given access to weapons being used by soldiers fighting ISIS in Afghanistan, it’s not that far a of logical jump to see an environment where unarmed public demonstrators are perceived as a threat.