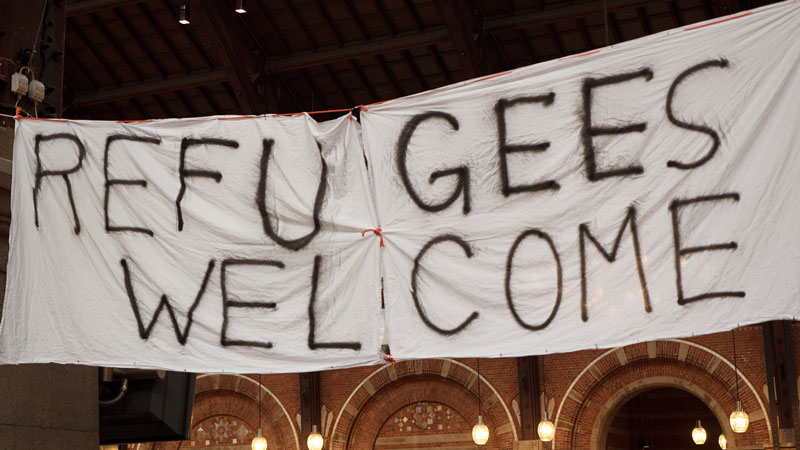 Many people responded to the twin horrors of the terrorist attack in Paris and the ongoing Syrian refugee crisis with expressions of grief and solidarity. For a handful of politicians though, the proper response was to shamelessly exploit these situations to promote a range of racist and anti-civil libertarian policies. While these politicians have come up with a wide-range of problematic proposals and statements, one of the most insidious has been the string of governors who have proclaimed that they would refuse to allow Syrian refugees to be resettled in their states.

Of course, such declarations are merely pompous posturing—governors, as many have pointed out, have no say in the matter. Immigration policy is determined federally, and once someone is lawfully admitted to the United States they can travel to any state they so please. While such statements may not be legally enforceable they are not without harm. History illustrates clearly what happens when politicians use the bully pulpit of public office to spread bigotry.

Luckily, there are ways for local activists to fight back. In response to Maryland Governor Larry Hogan’s statement that Syrian refugees would not be welcome in Maryland, the Montgomery County Civil Rights Coalition has drafted a resolution welcoming refugees for consideration by the Takoma Park, Maryland City Council. The resolution, which is modeled after a similar one that passed in Chicago, calls on Congress to streamline the refugee vetting process and for Takoma Park’s “city departments, local businesses, and charitable organizations to work with refugee organizations to provide shelter and sustenance for refugee families relocating to Takoma Park and integrating into our communities.”

Local resolutions like this play a valuable role in the fight back against Islamophobia, bigotry, and fear mongering. Just as the statements of governors and various politicians create a toxic atmosphere, resolutions like this create an environment of tolerance. Even if your governor has not vowed to refuse Syrian refugees, it is still important that you work to pass pro-refugee resolutions on the local level.

Governors are not the only politicians cynically exploiting Syrian refugees for cheap political points. Late last week, the House of Representatives voted to make the admittance process for Syrian refugees even more restrictive than it already is (see how your Representative voted here). So far, amongst state and federal politicians the anti-refugee crowd is speaking the loudest, believing they can reap only benefits from scapegoating the vulnerable amongst us. A wave of resolutions like the one proposed in Takoma Park will send a strong message that refugees are fully welcome here in the United States and thus there are no benefits to be gained from exploiting their plight.

BORDC/DDF is ready to work with any local activists that would like help with drafting a “Refugees Are Welcome Here” Resolution. And, if you already have a resolution proposed (or better yet passed!) we would love to know about it. Please use this form to contact BORDC/DDDF.