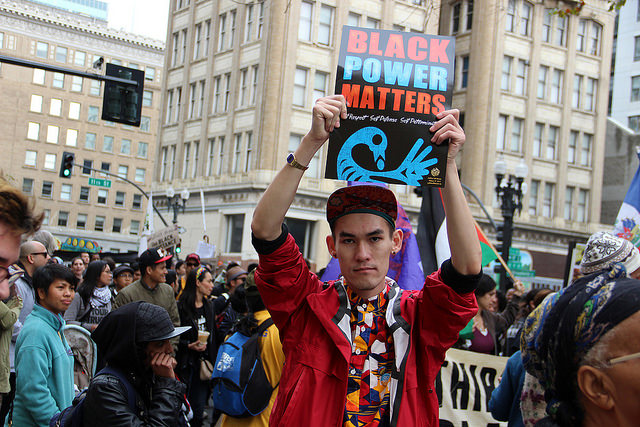 Over the long Martin Luther King holiday weekend, activists reclaimed the legacy of Martin Luther King from the sanitized and almost de-politicized image of King promoted by many celebrations and service activities carried out in his name on MLK day.

The truth is, he was a radical who was under almost constant surveillance and continually harassed by the government.

Here is a report on just some of the actions:

#ReclaimMLK oakland. We’re the youth the future is ours. No more killin or jail bars! pic.twitter.com/z8GHWOW3iO

In Chicago, the keynote speaker (author Isabel Wilkerson), many black leaders (including BORDC/DDF board member Timuel Black), and members of the clergy boycotted the annual Martin Luther King breakfast on January 15 to protest the Mayor’s role in the cover up of the police murder of Laquan McDonald. Protesters outside the breakfast challenged those who attended, and inside, a protester disrupted the event.

A woman just interrupted Mayor Rahm Emanuel’s MLK breakfast for a few minutes, shouting “16 shots and a cover up!” pic.twitter.com/uCCv7BNlrS

The next day, protesters blockaded the Chicago police credit union.

In Washington, DC, activists protested as Mayor Muriel Bowser signed a bill that will offer rebates to private businesses that install security cameras and register them with the police.

About two hundred activists braved a bitterly cold evening on Martin Luther King Day in Annapolis’s Lawyers Mall — directly in front of the Maryland State House — to send the message to the Maryland legislature that police accountability reform would remain a key issue in 2016.

Activists in Oakland spent 96 hours in actions to #ReclaimMLK, including stopping traffic on the Bay Bridge, and saying good morning to the Mayor.

traffic on the Bay Bridge is at a COMPLETE STANDSTILL. ✊🏾✊🏾 #ReclaimMLK #96hours pic.twitter.com/neSOwECVEh