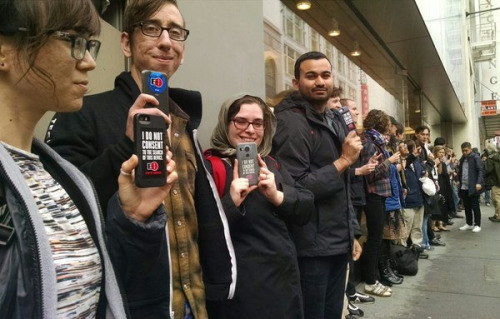 SAN FRANCISCO, CA –– Dozens of people, ranging from privacy advocates to casual iPhone users, rallied in front of Apple’s flagship store in San Francisco this evening to protest the U.S. government’s unlawful attempt to force the company to help the FBI hack into an iPhone, which would set a dangerous precedent and threaten the safety and security of millions of iPhone users worldwide. While the federal magistrate judge’s order applies specifically to a phone used by one of the San Bernardino shooters, Apple CEO Tim Cook argued that:

“Once created, the technique could be used over and over again, on any number of devices. In the physical world, it would be the equivalent of a master key, capable of opening hundreds of millions of locks — from restaurants and banks to stores and homes. No reasonable person would find that acceptable.”

The rapid-response action was organized by digital rights group Fight for the Future and supported by the Bill of Rights Defense Committee & Defending Dissent Foundation. The action was planned in just a few hours. Advocacy groups are planning more events next week, on Tuesday, February 23, a week from the date of the court order, to continue highlighting the danger posed by government mandated backdoors or weakening of encryption and security features in our devices.