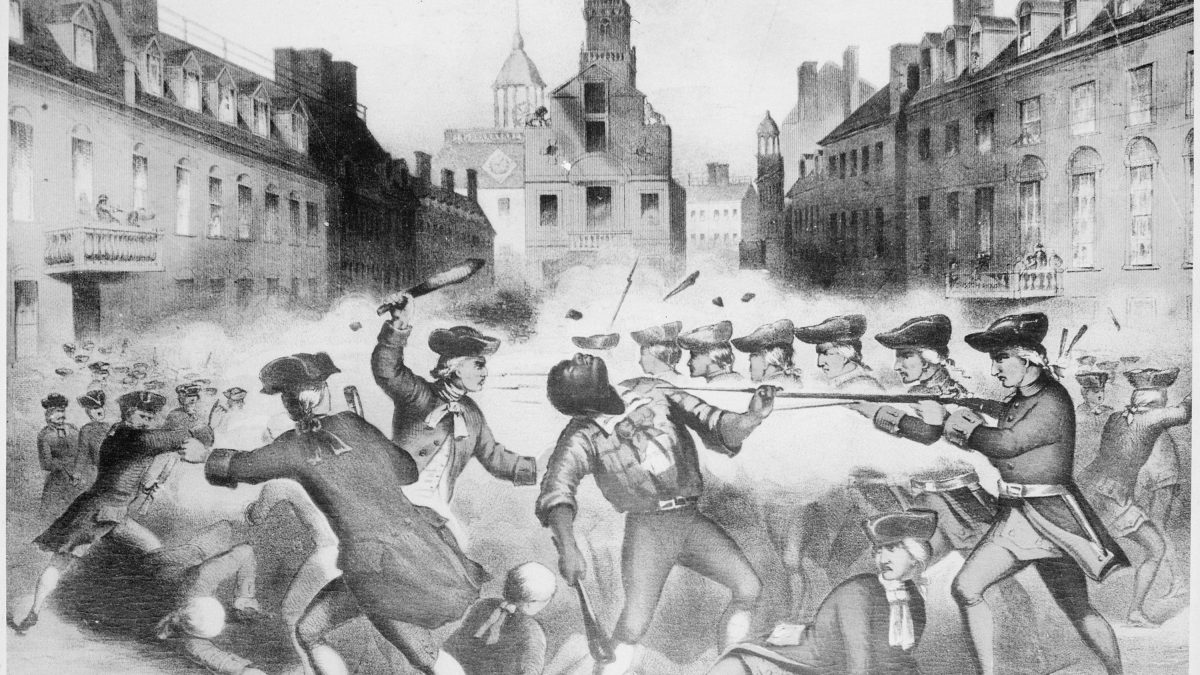 Crispus Attucks is killed during the Boston Massacre, 1770. Artist unknown.

Perhaps it’s appropriate that with July 4th, the anniversary of America’s violent break from Britain, less than a month away, the issue of state-sponsored violence and reactions by citizens to it is, once again, front and center in our national conversation. The catalyst, this time, is last month’s murder of George Floyd by a Minneapolis police officer.

These events should force those of us who are white and have benefited from that fact all our lives to ask ourselves a simple question: when the existing political structure has clearly been an instrument of repression and violence against an entire class of citizens for decades, and when decades of largely nonviolent efforts to change that system have yielded, at best, indifference and, at worst, even greater political repression and violence, when are those citizens justified in taking direct action—including the use of force—to change that system? And are we on the cusp of such a crisis now?

In colonial America in the 1770s, as now, state-sponsored political repression and violence against citizens was a driving force behind political unrest. The Boston Massacre in March 1770, in which several American colonists in an angry crowd were killed in a clash with British soldiers, is one of the most well-known and documented examples, but there were others leading up to the now-legendary encounters between American rebels and British Redcoats at Concord and Lexington, Massachusetts, in April 1775.

Collections of colonists gathered themselves into a number of small groups with such colorful names as the Liberty Boys, Mohawk River Indians, Sons of Neptune, and Philadelphia Patriotic Society. Not to mince words, they were terrorist organizations. Working outside the law and at cross purposes with the existing authorities, they tarred and feathered would-be sellers of tax stamps, assaulted customs inspectors, dumped tea into the sea, ran blockades, coerced juries, or prevented courts from sitting. Under their attacks, administrations in the colonies ceased to function. Destruction of the existing administration…is a stage through which successful insurgencies have to pass. (p. 6)

For over a decade prior to “the shot heard round the world,” John Adams, John Hancock, Thomas Jefferson, Benjamin Franklin, George Washington, and the rest of the Founding Fathers pleaded, cajoled, and ultimately demanded that the Crown cease its taxation without representation and the use of military force against American colonists. The response from Britain was to send still more troops to America and begin denying colonists even local representation.

By the spring of 1775, the colonial American leaders listed above had had enough. They resorted to revolutionary violence to free themselves from King George III’s army and political control. Racially, these colonists were white, and for nearly two-and-a-half centuries the white majority in this country has celebrated these “terrorists”—including Boston’s Sam Adams and his Sons of Liberty—as heroes and patriots for ultimately defeating what had become a British military and political occupation force.

These same leaders of the new American nation did not extend the rights they had demanded and obtained to all the inhabitants of the liberated colonies. Women were not allowed in the political arena, and the Constitution ultimately adopted after the revolution only meant freedom for white men. The coercive power of the government—at the local, state, and federal level—remained firmly in white male hands even at the end of the Civil War.

In the more than 150 years since then—despite the emancipation of women, despite the passage of the Civil Rights Act and the Voting Rights Act, and despite the election of America’s first black president—the overarching structure of state coercive power largely being wielded by white men has remained, with few exceptions, unchanged. And it is the longstanding and ongoing targeting of black Americans by that still white-dominated power structure—particularly law enforcement organizations —that has brought the country to a place where people of color increasingly see American governmental institutions as corrupt, unaccountably violent, and thus illegitimate.

When entire classes of people have been brutalized by the state for long enough, the situation becomes ripe for violent responses. This is exactly what happened during the latter stages of the Vietnam War and into the early 1970s. The question now is whether the political establishment’s response to the current crisis will be sufficient to avert a repeat of that era, or something even worse.

To date, there have been a relatively limited number of violent incidents by protestors, despite the radical level of state-sponsored surveillance, violence, and murder perpetrated against communities of color in this country. Most of these citizens have—until now—still tried to achieve change through the political process and the courts.

In some states, such as New Jersey, certain municipalities appear to have learned lessons from past episodes of police violence against black communities, as ABC News has reported, and have thus far avoided the kinds of scenes witnessed in Los Angeles, New York, and Washington, D.C.

As the ABC News piece notes, police and civic leaders in Newark remain mindful of the 1967 riots in their city, precipitated by two white police officers stopping and severely beating an African American cab driver. As Camden County Police Chief Joseph Wysocki told the network he reminds his officers every day that the department’s use-of-force policy “mandates de-escalation. Marching with the protesters is a form of de-escalation,” he said. Wysocki’s approach makes police part of the solution, not the core of the problem.

But other signs are alarming.

Last week, former U.S. Army officer and Iraq War veteran Senator Tom Cotton (R-Ark.) wrote an op-ed in the New York Times titled simply, “Send in the Troops.” In the midst of nationwide protests against the on-camera murder of a black man by a white Minneapolis police officer, a white, southern former military officer representing an ex-Confederate state calls for the use of massive military force in response to acts of vandalism and arson that are nowhere near the scale seen during the volatile summers of 1967 and 1968 at the height of Vietnam War protests, or in the wake of the assassination of Dr. Martin Luther King, Jr.

Cotton’s rhetoric and proposed response is the kind of political authoritarianism that further delegitimizes the federal government in the eyes of those protesting in the streets, making it easier for anti-government extremists—who I have no doubt are exploiting the situation—to say to the peaceful demonstrators feeling rage and despair, “You see, we told you so.”

A clear nonviolent way forward has been articulated by the Leadership Conference on Civil and Human Rights (LCCHR), a coalition of civil rights groups. Its call for specific police reforms includes the longstanding appeal by colleagues at my organization, the Cato Institute, for an end to “qualified immunity” for law enforcement personnel.

As University of Chicago Law School Professor William Baude noted in his landmark article in 2018, “The doctrine of qualified immunity operates as an unwritten defense to civil rights lawsuits brought under 42 U.S.C. § 1983. It prevents plaintiffs from recovering damages for violations of their constitutional rights unless a government official violated “clearly established law,” which usually requires specific precedent on point.” In other words, if a victim of police violence cannot find a prior case where the fact pattern is identical to the current claim, their lawsuits inevitably run aground on qualified immunity.

The doctrine is truly Kafkaesque, and there is hope that the Supreme Court will, this term, either limit or perhaps even reject the doctrine entirely.

Eliminating qualified immunity would help address after-the-fact violations of rights. But the vast majority of Americans—and above all, those demonstrating around the country—also want to prevent rights violations in the first place.

To that end, other steps recommended by the LCCHR, and endorsed by DRAD include national use-of-force standards, a police-misconduct database, prohibitions on profiling, as well as a general demilitarization of police forces across the country. To that list I would add a ban on the use of mass digital-surveillance technologies like cell site simulators (police-operated cell tower impersonators that pinpoint cell device locations) and wide area motion imagery (airborne, real time video surveillance of entire cities) by law enforcement at any level.

Implemented as a package, these reforms would help prevent — but can never entirely preclude — police violence against law abiding citizens. Only by electing leaders committed to a relentless policy of protecting the fundamental constitutional rights of all Americans can we ever hope to avoid repeats of the kind of state-sponsored murder of men like George Floyd.

Passing laws is never enough. The enactment of the Voting Rights Act and the Civil Rights Act over 50 years ago only happened because of intense political pressure by King and tens of thousands of other civil rights activists. But as with everything in politics, it’s the follow-through that matters.

Even if qualified immunity is eliminated and all the other reforms called for by LCCHR are made real, the greatest challenge will come afterwards: ensuring that the reforms actually get results. For that to happen, white politicians will need to acknowledge the legitimacy of the demands of people of color for fundamental changes in American policing and domestic surveillance practices and work with their colleagues of color to implement those changes, along with conducting daily, rigorous oversight of their public-safety departments.

If the existing political establishment fails yet again to address these grievances in a deep, substantive way, then those who have marched peacefully may conclude that further talk is pointless, and that emulating the example of past American revolutionaries is their only course of action.

America has come perilously close to this kind of crisis before, during World War II with the race riots in Detroit and other cities, and across the country in the turbulent 1960s and 1970s. The refusal of first Lyndon Johnson and then Richard Nixon to extricate the United States from Vietnam and end police brutality against African Americans led to the rise of the Weather Underground and the militarization of the Black Panthers. Those more violent offshoots of political protest only faded after some, but not all, of the underlying grievances that led some to a more militant path had been addressed.

Each of these cases was treated as a one-off, just “a few bad apples” in a police department that otherwise was sound. More Americans today finally understand that those “bad apples” were evidence of a rotten core in entirely too many police departments from Los Angeles to Chicago to New York and beyond.

Whether the murder of George Floyd will finally mark a turning point, one in which systemic police brutality against and targeting of communities of color is finally ended, very much remains to be seen.

Political legitimacy is an inherently fragile thing. Its loss inevitably leads to violence and even revolution. America’s white-dominated political institutions are facing their greatest crisis of legitimacy in decades, and systemic racism — particularly in domestic police surveillance and violence targeting communities of color — is the reason why. Our society ignores the obvious solutions at its peril.

Former CIA analyst and ex-House Senior Policy Advisor Patrick Eddington is a Research Fellow at the Cato Institute and a DRAD board member.