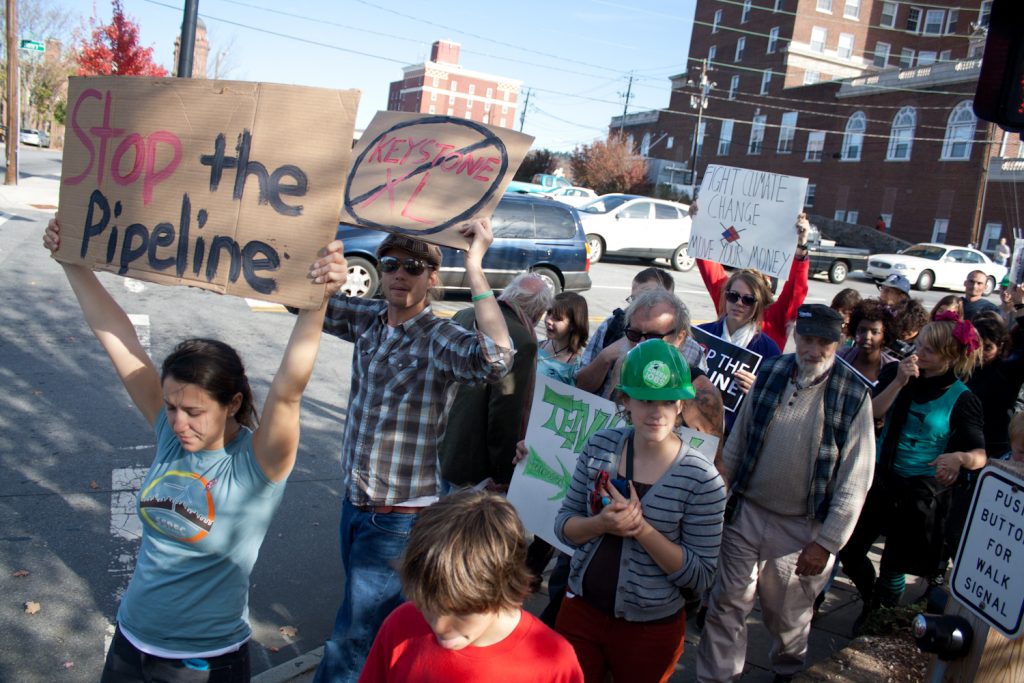 Anti-pipeline protest in Asheville, NC in 2011. Photo Will Wysong Under CC BY-NC-SA 2.0

This article is reprinted with permission. It originally appeared at NC Policy Watch.

The state’s surveillance and counter-terrorism unit, the Information Sharing and Analysis Center (ISAAC), warned law enforcement officials that the Atlantic Coast Pipeline could attract “violent extremists” who are opposed to the natural gas project in North Carolina, a document obtained by Policy Watch shows.

According to a December 2017 unclassified “threat assessment” (see below), the ACP “has the potential to become a regional focal point for ideologically or politically motivated violent extremist actors inspired to commit acts intended to disrupt and halt ACP construction.”

The document was intended to be shared only with law enforcement, but it was included in attachments of emails among state environmental officials, provided as part of a public records request. Therese Vick of the Blue Ridge Environmental Defense League made the request and forwarded the document to Policy Watch.

It’s unclear who authorized the assessment or if there have been recent updates to the report. Patty McQuillan, spokeswoman for the State Bureau of Investigation, told Policy Watch the agency could not comment on the document.

Tammie McGee, a spokesperson for Duke Energy, a co-owner of the ACP, told Policy Watch, “We haven’t seen the document you’re referring to, and obviously it would be inappropriate for us to speak on behalf of any law enforcement agency. To ensure safe and efficient construction sites, procedures are in place to protect our employees, our contractors and the communities we serve during all phases of Atlantic Coast Pipeline construction.”

Despite the possibility that the protests could become violent, the ISAAC document goes on to state that there is no “specific, credible information” suggesting international or domestic terrorists, or “homegrown violent extremists,” are actively targeting the ACP.

Hope Taylor is executive director of Clean Water for North Carolina, among the groups protesting the ACP. “We certainly hope this isn’t true,” Taylor said. “It could even be a rumor started by the pipeline builders or contractors to motivate increased law enforcement surveillance, thus increasing public expense, and the chance of some incident occurring if protesters are feeling harassed.”

The ACP, a $6.5 billion project co-owned by Duke Energy and Dominion Energy, begins at a fracked gas operation in West Virginia. It routes through sensitive wildlife habitats and waterways, including those on federal lands, in that state and Virginia before entering North Carolina in Northampton County. Once in North Carolina, the ACP traverses 160 miles through eastern North Carolina before connecting with another gas line in Robeson County.

In late July, the Federal Energy Regulatory Commission gave the final go-ahead to Dominion Energy and Duke Energy, co-owners of the ACP, to begin pipeline construction. The utilities have begun building a compressor station and office building near the small town of Pleasant Hill in Northampton County, as well as metering and regulation stations.

Opponents of the ACP are concerned about the environmental impacts of the routing and the region’s further reliance on fossil fuels, which contribute to climate change. There are also environmental justice issues related to the ACP; in North Carolina, the pipeline travels through many low-income areas and communities of color, including American Indian lands.

Three advocacy groups—Clean Water for North Carolina, the Blue Ridge Environmental Defense League and NC WARN—have also filed a civil rights complaint with the EPA against the N.C. Department of Environmental Quality (DEQ), which, after many delays, eventually issued the state permits allowing the project to continue.

ISAAC Report on ACP Protests by Lisa Sorg on Scribd

In addition, there have been many protests and sit-ins in North Carolina against the ACP, all of them peaceful.  Yesterday, demonstrators rallied outside the state Capitol in downtown Raleigh and then marched down Fayetteville Street to protest Wells Fargo’s financing of the project. Earlier this year, 15 people were arrested  in Raleigh on charges of second-degree trespass after refusing to leave a state building as part of a non-violent sit-in.

Karen Bearden is with 350Triangle.org, a local chapter of a national organization advocating for clean energy. She often protests against the ACP, most recently yesterday. She said spending tax dollars for to monitor and assess “people who are peacefully speaking out” against the ACP is “unbelievably sad.”

State investigators also alerted law enforcement that opponents could use “drones, for pre/post operational surveillance” of the sites “ahead of a planned attack to disrupt construction.”

The ISAAC document also warned that opponents could use “instruments of destruction, such as explosive or incendiary devices targeting construction facilities, or personnel, including law enforcement or private security personnel.”

However, the document does not mention that industry has tried to infiltrate and disrupt peaceful demonstrations at several pipeline sites. TigerSwan, a private security firm based in Apex, has been cited by North Dakota regulators for surveilling and conducting intelligence investigations on protesters without a private investigator’s license.

We have to be concerned about protestors’ safety

James Reese, president of TigerSwan, has been issued a North Carolina private protective license as well as one allowing him to be a security guard, by a board overseeing those permits.

Taylor said her organization is advising “sincere protestors to keep erratically or violently behaving people isolated and to warn others. With the kind of tactics that TigerSwan has used, we have to be concerned about protestors’ safety.”

Nor does it mention land agents’ tactics in trying to access private property for surveys related to the ACP. Many land owners have complained publicly, and in a related court case, that the agents, contracted by the utilities, have tried to intimidate them or even lied, to gain that access.

Some landowners whose property is in the ACP route have reported trucks parked nearby, Taylor said, “with a person just sitting in them for extended periods.”

NC Policy Watch, a project of the North Carolina Justice Center, is a news and commentary outlet dedicated to informing the public — including elected officials as they debate important issues — and ultimately to improving the quality of life for all North Carolinians.