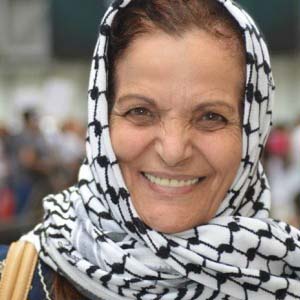 On February 25, 2016, a three-judge panel of the Sixth Circuit Court of Appeals handed down a ruling in the appeal of Rasmea Odeh. The court remanded the case back to the trial court in order for the trial court to hold an evidentiary hearing about whether an expert witness’s testimony is admissible at trial. Depending on the outcome of this hearing, Rasmea could be granted a new trial.

BORDC/DDF has long supported Rasmea Odeh. We have maintained that the initial charge against Rasmea , “unlawful procurement of naturalization,” stemmed from an unrelated and improper investigation of political activists and her prosecution was politically motivated in order to suppress dissent. While the political nature of Rasmea’s case was always mentioned by the Rasmea Defense Committee, her appeals centered on why her trial was unfair. With a “partial victory” in her appeal announced it is worth reviewing what issues are at stake, what the Sixth Circuit’s ruling is, and what this means for freeing Rasmea.

What Did the Sixth Circuit Rule?

The Sixth Circuit ruled the trial court erred in not holding an evidentiary hearing about whether to admit an expert witness in Rasmea’s case. The defense sought to admit testimony from an expert witness about how Rasmea’s PTSD as a torture survivor would have affected her ability answer questions on an immigration form about her conviction in an Israeli military court. In addition to this, the defense argued that the crime in question – unlawful procurement of naturalization – was a specific intent crime, meaning that in order to be guilty Rasmea had to have intentionally committed an act prohibited by law and did so with the intent to cause a specific result. The prosecution disagreed, arguing the crime in question was a general intent crime, meaning that to be guilty Rasmea merely had to have intentionally committed an act prohibited by law.

Per the prosecution, since the crime was a general intent one, Rasmea was not entitled to present expert testimony about PTSD. The trial judge, after deciding that the prosecution only had to prove general, not specific, intent denied the defense the right to have a hearing about whether they could present the witness in trial. As a result, the jury never heard evidence of Rasmea’ PTSD or torture.

The Sixth Circuit did not decide whether unlawful procurement of naturalization was a specific or general intent crime though. However, all three presiding judges agreed that under the circumstances it did not matter, as even if unlawful procurement of naturalization was a general intent crime an evidentiary hearing should have been held about the admissibility of the expert testimony.

What Does this Mean?

This means that the trial court will have to hold an evidentiary hearing about whether the expert testimony proffered by the defense should be in admitted in trial. This does not mean the “conviction was overturned altogether.” However, should the hearing conclude that the expert testimony is admissible, most likely Rasmea will have to be granted a new trial. At this trial, unlike her last one, she will actually be able to present a more full and thorough defense by introducing evidence about her PTSD to the jury.

Other issues raised on appeal centered on the admission of documents from an Israeli military court, such as whether a US-Israel treaty mandated their admission and whether their admission violated a Federal Rule of Evidence that prohibits evidence that’s probative value is substantially outweighed by the danger that it may cause unfair prejudice. The prosecution alleged that Rasmea lied on her immigration forms when asked about whether she had ever been convicted of a crime. Introducing into evidence her answer to the question and that she had been convicted in an Israeli military court would be all the prosecution would need to introduce.

Yet, the prosecution introduced into evidence Israeli military documents detailing a bombing at a supermarket, the names of the victims, as well as a prayer for the victims. In the controlling opinion, Judge Rogers ruled that the admission of said documents did not violate this rule. Yet, in a concurring opinion Judge Moore agreed with the judgement, but stated the documents did violate the Federal Rules of Evidence, but that the error was harmless (i.e. would not have affected the outcome).

Judge Batchelder concurred with decision to grant a new evidentiary hearing, but dissented from the decision about the admission of the Israeli military documents. As Justice Batchelder explained, the case was not about merely not telling the truth, but also about whether if Rasmea had told the truth about her past, Citizens and Immigration Services would have found Rasmea ineligible for citizenship. Taking this into account, the trial court had “crippled” Odeh’s defense at trial. Justice Batchelder said of the military documents:

The risk of unfair prejudice from this evidence was enormous, especially since Odeh was not permitted to testify at trial about her claims of torture. The word “terrorist” may never have been uttered before the jury, but it was doubtless in the minds of everyone present.

In a press release from the Rasmea Defense Committee, spokesperson Nesreen Hasan stated, “This isn’t a full victory yet, of course, but it really is what we were hoping for and anticipating at this stage. The conviction wasn’t overturned altogether, but at least Judge Drain will be forced to rethink his decision on the torture evidence.”

That Rasmea will potentially get a new trial is cause for celebration. That the Sixth Circuit did not rule on one of the most contentious legal issues in the case – whether the prosecution had to prove general or specific intent – means that it is very likely that this issue could in the future result in more appeals. It is also possible for the prosecution appeal to the Sixth Circuit’s decision.

While BORDDC/DDF fully hopes that Rasmea will get a new trial, it is also important to continue to highlight how Rasmea’s case is part of a larger pattern of targeting dissent, particularly pro-Palestinian human rights advocacy. It is important to build a strong grassroots movement to both defend Rasmea, as well as fight back against attempts to repress the movement for Palestinian human rights advocacy and criminalize dissent more generally.