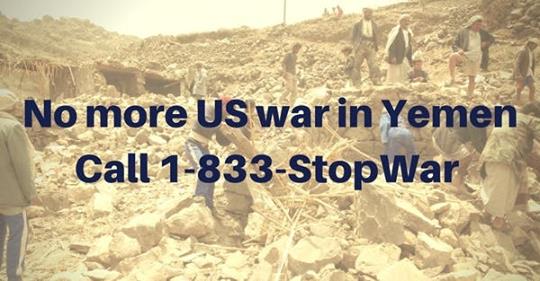 For over three years, and spanning both the Trump and Obama Administrations, the US has been participating in the Saudi-led war in Yemen. While the Saudi-led coalition has been accused of war crimes and crimes against humanity, targeting civilians, and plunging eight million people into famine, the US has been helping to refuel Saudi planes in midair and sharing intelligence for targeting assistance​.

This US military assistance constitutes “hostilities” under the War Powers Act. It is entirely illegal for any president–be it Trump or Obama–to engage in hostilities without Congressional authorization. And isn’t just the War Powers Act, the Constitution also gives Congress the exclusive power to initiate military action.

Congress never debated this war, and never authorized US participation in the hostilities. ​Tell Your Member it’s time for a debate, and time to end the war!

Especially now, after the brutal murder of journalist Jamal Khashoggi inside the Saudi consulate in Turkey has thrown the spotlight on the brutality and repression of the Saudi regime. Coupled with the increasing reports of Saudi war crimes in Yemen, such as the bombing of 40 children on a school bus, there is a serious need for the American people to have a chance to weigh in on our engagement in the Saudil – led war in Yemen.

Tell your member of Congress to support the Yemen War Powers Resolution.

Whether you think US intervention in Yemen is a good idea or a bad idea, this is a matter for Congress to decide. Before undertaking such a military action the people have a right to weigh in on whether they think such action is justified, within our national interests, and/or morally acceptable. Tell Congress to reclaim their constitutional war powers.

We know this type of conflict can quickly escalate. In 1959, the US had just 750 military advisers in Vietnam. Less than a decade later, we had over half a million troops there. The very real danger of escalation is precisely why the War Powers Act defines hostilities requiring Congressional authorization broadly.

We need to have a say. Enough is enough when it comes to unauthorized war.