Boycotts Are Free Speech: Statement on US Ambassador’s Remarks on Representatives Tlaib and Omar 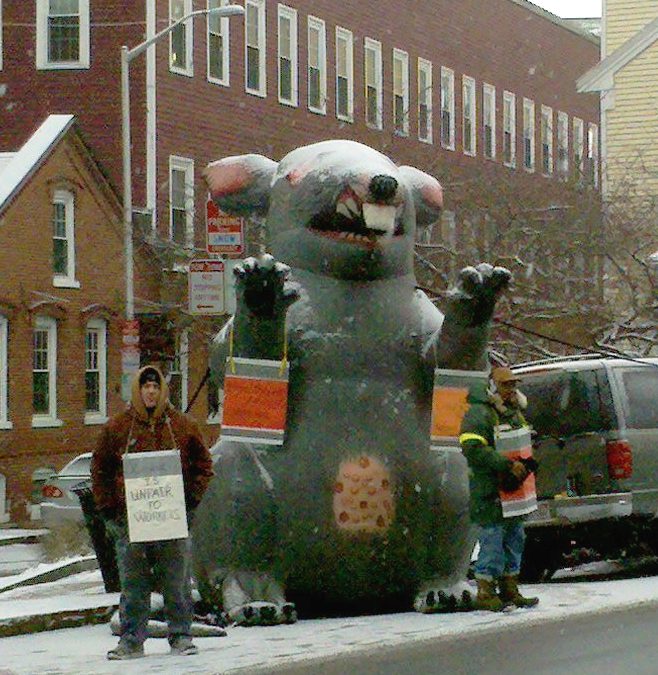 An iconic symbol of the labor movement, Scabby the Rat, is facing a threat by the National Labor Review Board and risks being banned from protests. The threat to Scabby more broadly seems aimed to hamper unions ability to fight for themselves, and protest non-union businesses.

The NLRB claims that the presence of Scabby is intended to scare customers away from the targeted business,“Their use is unlawful under the (National Labor Relations) Act and not protected under the First Amendment because they are being used specifically to menace, intimidate and coerce in aid of an unlawful purpose,” Peter Robb, the NLRB’s general counsel, said in a brief filed last month in a case in Philadelphia.”

Scabby the rat has been primarily used by construction trade unions while on strike, and in protest of their boss. It’s an inflatable rat with red eyes whose name comes from the term “scab,” which means people not acting in solidarity with a union, often times by crossing a picket line. The balloons come between 6 and 25 feet and in Chicago, the place they were founded, their use has become synonymous with workers on strike.

The complaint that spawned the NLRB review was reopened against Donegal Excavating and Union of Operating Engineers Local 150 while Republicans hold a majority on the NLRB. Part of the claim by the NLRB is that Scabby is used in secondary boycotts by unions, something that was outlawed by the 1947 Taft-Hartley Act. Legal rulings in the past have offered up an interpretation of Taft-Hartley that prevents unions from engaging in secondary boycott activities like picketing, but considers activities like leafleting protected by the First Amendment.

In 2011 a similar case came before the NLRB involving Carpenters Local 15006.The same issue was raised about Scabby being involved in secondary boycott efforts, with the targeted group claiming that Scabby “threatens, coerces, or restrains” them as a  secondary employer. The board ruled in favor of the union saying that, “the balloon display did not involve any confrontational conduct, unlike picketing. Nor was the display coercive in other ways.”

This isn’t even the first attack against Scabby the rat this year. Just a few months ago a federal court heard a case regarding the use of Scabby the rat, and ruled in favor of the union, Construction & General Building Laborers Local 79. Similar to the ruling in 2011 the judge did not view inflatable animals and handbilling to be equal with a picket line. The union also warned of the threat to free speech as these challenges to Scabby can intensify.

The latest attack on Scabby largely seems to be a partisan effort to dull the tactics of unions when engaging in various forms of labor actions. Unions see stagnant banners and inflatables as expressions of free speech, much like flyering or leafleting, while the conservative members of the NLRB consider Scabby the rat to be closer to a picket line, than leafleting, meaning it wouldn’t be subjected to protection by the First Amendment. There’s concern that continuously designating tactics used by unions as outside the realm of protected free speech opens them up to strenuous attacks.  The ability for unions to go on strike and pressure businesses is essential to the protection of workers’ rights. Creating increased barriers to workers taking action for themselves threatens their free speech rights, and makes working-class people worse off.