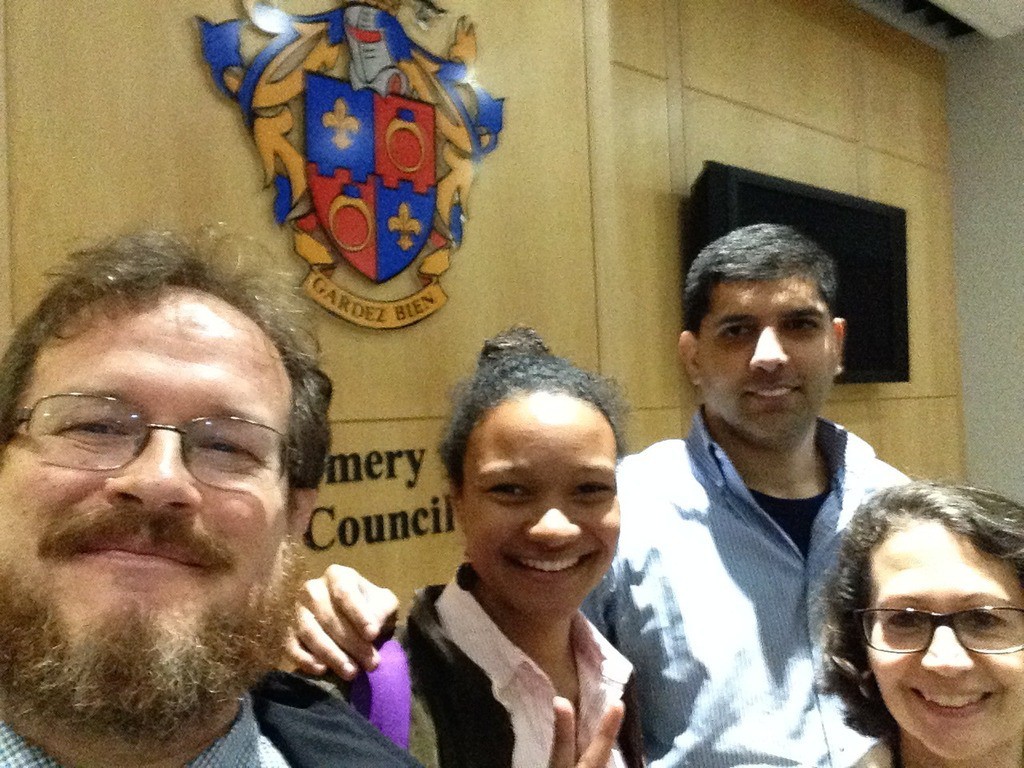 Yesterday evening MCCRC’s Thomas Nephew joined other speakers from a new “Freedom To Boycott” campaign (freedom2boycott.com) urging legislators from Montgomery County to keep Maryland’s hands off the “BDS” (boycott, divestment, sanction) movement against Israeli policies — and protect all nonviolent boycott movements like it.

The campaign — organized by local activists including Saqib Ali (Equality for Eid), Susan Kerin, Jean Athey (Peace Action Montgomery), Shelley Fudge (Jewish Voice for Peace), and others — was prompted by a October 30 report that the Baltimore Jewish Council (BJC) will be lobbying for a Maryland law that “prevents businesses supporting the boycott, divestment and sanctions (BDS) movement against Israel from doing business with the state of Maryland.”

The BJC’s anti-BDS bill would be “this coming year’s major policy issue” according to director Art Abramson; it would “make it very difficult for those who want to deal in business [and who] promote boycott, divestment and sanctions against Israel to operate in our state.”  While the report had no further details about the bill Abramson would like to see, it may well be modeled on recently passed legislation in Illinois  or a similar proposal in Florida.  These laws are the tip of an iceberg of anti-BDS legislative and administrative measures around the country that BORDC/DDF’s Chip Gibbons and others are calling “The Palestine Exception to the First Amendment.”

While there are probably very few, if any, Maryland companies that currently participate in BDS actions against Israel, laws like those Mr. Abramson advocates would all but snuff out attempts to recruit such companies in the future; no company, or very few, would want to risk the ability to do business with Maryland state or local governments because of a political position.  Freedom of speech and freedom of association aren’t free if the state can stigmatize or penalize them for their content.  As Thomas Nephew put it in his prepared remarks (available here and at freedom2boycott.com),

..once Maryland is in the business of ruling thumbs up or down on one kind of political boycott or divestment campaign, it opens the floodgates for trying the same with others. Environmental, immigration, LGBTQ and labor movements (to name a few) have all turned to boycotts and divestment as  nonviolent means of making their points — and making America, and the world, a better place.  Unless you prevent it, efforts to stigmatize or penalize BDS will serve as an instruction manual for well-heeled or well-connected lobbyists to do the same again and again with other peaceful exercises of free speech.

Other speakers made equally important points.  Saqib Ali pointed out how the issue invites unequal treatment before the law; his example was that if BDS against the government of Israel was deemed automatically anti-Semitic, legislative action supporting sanctions against the government of Iran should be considered automatically Islamophobic.  Of course, neither is the case — opposing the actions of a government in no way implies blanket condemnation of a people or a belief community.

Speaking for Peace Action Montgomery, Whit Athey noted that the gravity of the charges against Israel’s government makes the BDS campaign necessary and appropriate: “…the Geneva Conventions prohibit colonization of occupied land, group punishments, and attacks against infrastructure–such as water and sewerage systems–during military operations, all of which Israel is doing. The BDS campaign is a non-violent action against repressive right-wing policies, about the only non-violent tool remaining to Palestinians.”  He also vigorously disputed that it was anti-Semitic: “Jewish people themselves are well represented among those promoting BDS. […]  …using the term “anti-Semitic” … trivializes real anti-Semitism and demeans the experience of Jewish people who have suffered from it.”

Montgomery County resident, Palestinian-American, and 1967 refugee Samira Hussein said, “By saying that the BDS movement is racist, you will be saying that the injustice that happened to me never existed. But it did happen not just to me but to hundreds of thousands of people. And I do exist. […] what does this thing called BDS mean to me? It means hope. It means I am not alone.”

The Freedom2Boycott coalition may not leave it at simply opposing anti-BDS legislation like the Illinois or Florida bills.  We may also support legislation protecting all boycotts from state interference.  As Thomas Nephew concluded in his remarks to Montgomery County’s delegation, “Indeed, I hope you will go further, and support efforts to explicitlyguarantee that political boycott, divestment, or sanctions campaigns can not be penalized by the state of Maryland in any way.

Meanwhile, here’s more information about Freedom2Boycott; you can take action with a petition to your Maryland legislators.