Home / Dissent NewsWire / In Like Flynn – What does Michael Flynn Mean for Civil Liberties? 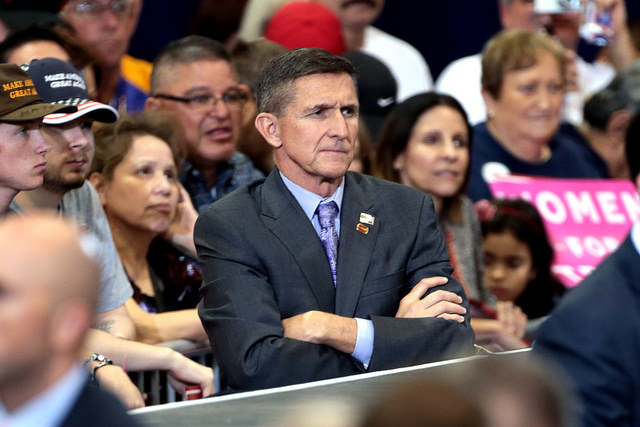 President-elect Donald Trump has selected retired Lt. Gen. Michael Flynn for the position of national security adviser. It’s one of the presidential appointments that does not require Senate confirmation. According to an article on the ABC News website, “Essentially, heads of agencies and a lot of deputies need to be confirmed, whereas adviser positions for the president do not,” Seemingly, if the American people elect a president, knowing his positions on the issues and his proposed policies, the people he chooses to advise him would be people who share those positions and support those policies. Unfortunately, during the incredibly long 2016 presidential campaign, Trump was contradictory about many of his positions, and his policy statement consisted of  “Make America great again.” So, the lack of a confirmation hearing for Flynn may be problematic.

Flynn retired from military service in 2014, after the Obama administration fired him from his job as director of the Defense Intelligence Agency. He has a solid background in intelligence gathering, but according to some co-workers at the DIA, he was not suited to running a large organization, especially one composed of mostly civilians.

After his retirement, Flynn became a very loud and prominent critic of the Obama administration’s foreign policy, saying that the president was downplaying the threat presented by radical Islam, and saying it to audiences after being introduced as “General Flynn.” A June 2015 article in Foreign Policy expressed concern that “Flynn could come to be seen as politicizing the military’s officer corps and blurring – or erasing – the line separating senior military generals from partisan politics.” A little over a year later, Flynn was completely wrapped up in partisan politics, supporting and advising Donald Trump and leading chants of “Lock her up!” on the campaign trail. The Washington Post wrote that he dismissed criticism of his extreme partisanship, saying: “When someone says, ‘You’re a general, so you have to shut up’ … I say, ‘Do I have to stop being an American?’”

That’s a good question. The answer is complex and requires subtlety, something Flynn and his new boss, Trump, both seem to lack. Flynn took an oath when he joined the military that included swearing to “obey the orders of the President of the United States.” While serving, all military personnel, and especially generals, are expected to be apolitical and to express obeisance toward their commander in chief, as a way to let civilians know that the military and the government are working in harmony toward a common goal, and to preserve public trust in both institutions. That kind of “being an American” is more nuanced than the partisan kind.

But let’s accept that Flynn is pro-Trump. How did that happen? In much the same way that many American voters became pro-Trump, it happened because Flynn was angry. As Politico described it in October, some people who know Flynn worry that, because he “believes he was pressed into early retirement for appearing to question the Obama administration’s public narrative that Al Qaeda was close to defeat, (he) is being handed a national stage to play out his personal frustrations.” If you put that together with the theory that Trump ran for president because he was humiliated by Obama at the 2011 White House Correspondents’ Dinner, you can make quite a case for 2016 as the year of revenge politics.

Flynn has some very extreme opinions. As the New York Times reported in November, he thinks that “Shariah, or Islamic law, is spreading in the United States,” and has already advised Trump that “the United States is in a ‘world war’ with Islamist militants and must work with any willing allies in the fight, including President Vladimir V. Putin of Russia.” He has tweeted wild conspiracy theories and fake news, although he deleted his Hillary Clinton-sex crime tweet on Dec. 14. Also on Dec. 14, the Washington Post reported that in 2010, Flynn “inappropriately” shared classified information with foreign military officers in Afghanistan. He had not been authorized to share the information but he had shared it “unknowingly” and no harm was done, according to Army records.

He’s an unpredictable guy –another trait he shares with Donald Trump. His staff at the DIA was so familiar with Flynn’s flights of fantasy, they had a name for them: “Flynn facts.” And “Flynn facts” may go far. Talking Points Memo reported on Dec. 14 that Flynn is receiving the daily intelligence briefing Trump deigned too repetitive for his smart-guy self and is passing the information on to Trump. So, an angry man who has issues discerning reality is playing the child’s game of telephone, sitting between the briefers and an impulsive, contradictory narcissist with a small vocabulary who seems to avoid thinking deeply whenever he can. We’ve all been exposed to “Trump facts.” Remember the one about most Mexicans being rapists and criminals, and the one about the 2 million illegal votes for Hillary? Imagine what the marriage of “Flynn facts” and “Trump facts” could produce.

There’s no Senate confirmation required for retired Lt. Gen. Michael Flynn. He’s in, and we can only hope he doesn’t make the phrase “in like Flynn” mean terrible things for our national security.