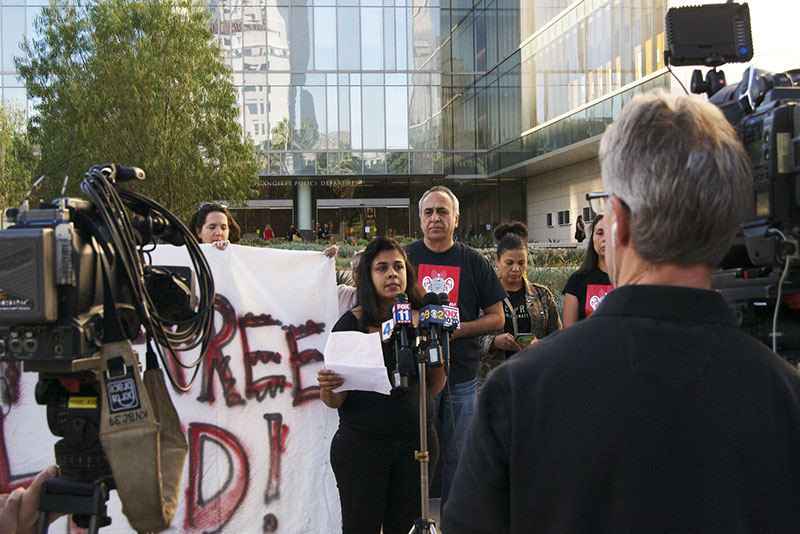 This update comes from our partners at the Stop LAPD Spying Coalition:

Los Angeles came out strong at the December 8th and December 10th actions.  Joined by dozens of community members, the Drone-Free LAPD/No Drones, LA! Campaign released the Drone Report on the morning of December 8th at a press conference followed by a strong presence at the Police Commission meeting.  Several people spoke at the Commission meeting against the use of drones by LAPD and demanded that the two Draganflyer X6 Drones currently stored at the LAPD Inspector General’s office be either destroyed or returned to the manufacturer.  See Media Coverage here.

The action at the Mayor’s Mansion on Thursday December 10th evening turned into a study in flipping the script on state violence and deeming LAPD irrelevant.  The evening started with a march from the corner of Wilshire and Western and headed to the Mayor’s mansion. As usual the mayor refused to come out or in his typical manner the #backdoormayor took off.  The community stayed engaged in educating each other on the issue of LAPD drones using theater, slide presentation and townhall style conversation.  Within minutes the LAPD came out in full force including riot gear and paddy wagon, and threatened to arrest people.  When asked under what law they would be arresting us, Captain Storker said he didn’t know of the code but he didn’t have to give us the LMC code either.  Then he came back with some obscure explanation and wrong code LMC 56.44E.

About 40 strong community members held their space in rain and continued with their activities.  As the program finished we were surrounded by LAPD ready to start arresting.  At this point everybody decided to go caroling in the Mayor’s neighborhood and starting going door to door singing while the LAPD watched seething with anger.

Here are some of the lyrics:

People in Seattle Did it! So Can We! Join the Fight! Keep LAPD Drone-Free!

On Tuesday December 8th, the Stop LAPD Spying Coalition and the Drone-Free LAPD/No Drones, LA! Campaign released The Drone Report.  This first of its kind community based report on the use of drones by police concludes that the LAPD Draganflyer X6 drones acquired from the Seattle Police Department in May 2014 and currently stored at the LAPD Inspector General’s office, pose a significant threat to our communities. The report shows that these new weapons pose a serious cost both in public resources, public safety and the mental and physical health of targeted communities.  It discusses the history of drone use and investigates the growing industrial complex surrounding drone use and manufacturing.  The report is informed by thorough research, and by several focus groups and over 200 surveys collected capturing the community’s sentiment in regards to LAPD and drones.  Those we surveyed were familiar with drones and overwhelmingly believed the use of drones by local police is a step forward in the militarization of law enforcement.  83% of survey participants believe LAPD’s use of drones will result in unnecessary or unreasonable invasions of privacy.

The report shows that while the LAPD claims to want to use the drones only in special situations, historical evidence of “Mission Creep”–whereby the use of policing tactics and technologies expands beyond their original functions and goals–puts this intent in serious doubt.  The report also looks into LAPD’s existing architecture of surveillance and how drones fit into that.

The development of the report was led by the History and Research working group of the Stop LAPD Spying Coalition. In addition to releasing the report the Drone-Free LAPD campaign has also collected over 3000 petition signatures demanding that LAPD be prohibited from using the drones.