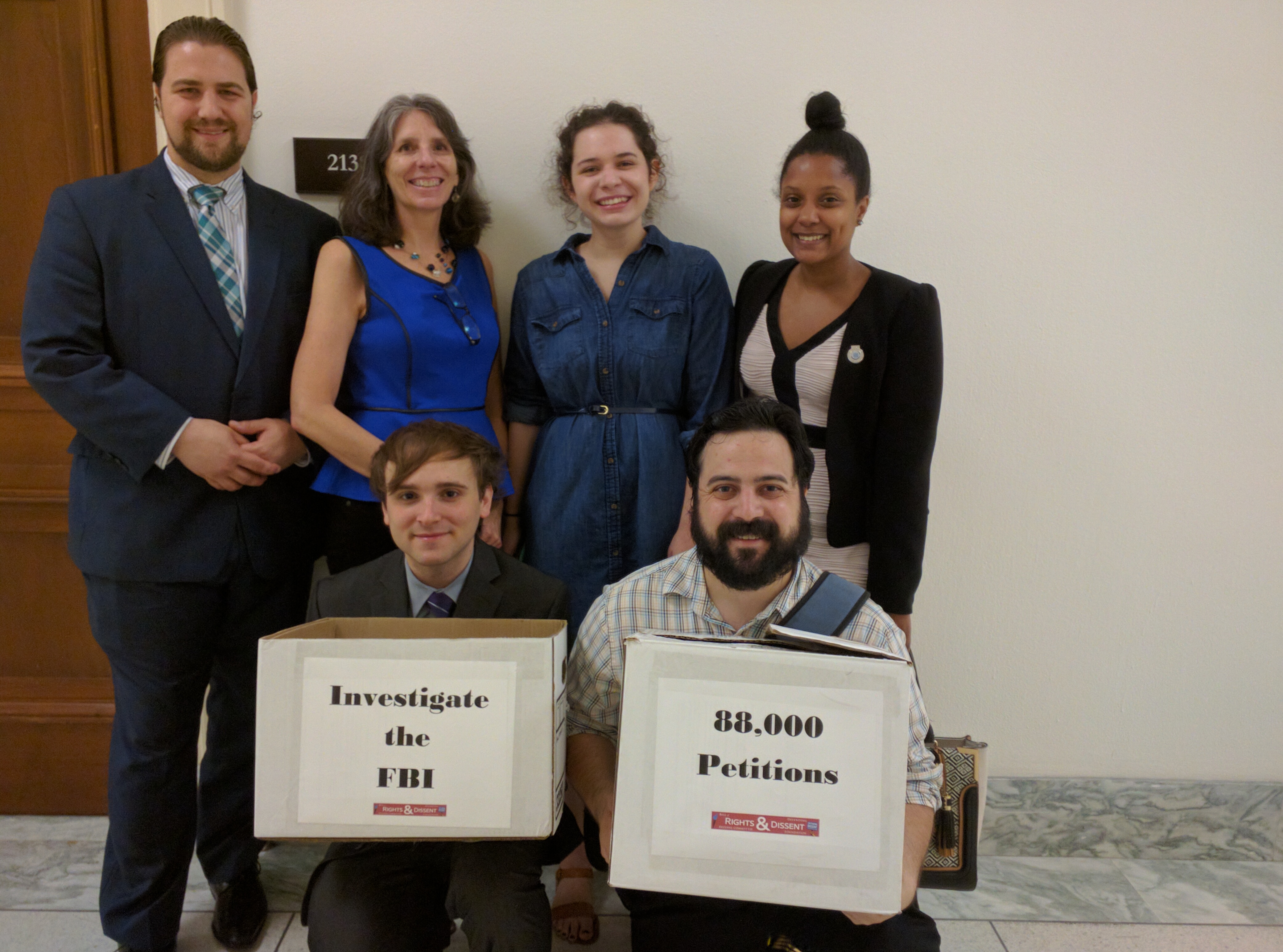 Leaders of every social and political movement of consequence in the United States have been spied on by the FBI, simply because they sought to change the status quo.

One of our founders, Frank Wilkinson, was spied on for four decades, and had an FBI file exceeding 132,000 pages. In 1952, after nearly a decade of surveillance, the FBI schemed with private developers to sabotage his career at the Los Angeles Housing Authority and blacklist him. In 1986 a federal judge issued an injunction barring the FBI from further spying on Wilkinson.

To put it nicely, we really don’t like the FBI’s political spying. For decades now we have sought to expose it, organize against it, and attempt to get meaningful reforms put in place that would prevent the FBI from engaging in this sort of abusive behavior again.

In the last couple of years, we have spoken out and organized against the FBI’s infiltration of Muslim communities, and the agency’s unethical use of informants to ensnare the most vulnerable members of the community into phony terror plots cooked up by the FBI. We spoke out when this same strategy was used against environmental activists, RNC protesters, and members of Occupy Cleveland. We have joined efforts to call attention to the FBI’s pernicious profiling of Asian-American scientists as spies. And we, of course, did not remain silent when we learned about the FBI’s spying on Occupy and the Movement for Black Lives, and we helped call attention to FBI spying and harassment of anti-Keystone pipeline activists.

In November of 2015, yet another FBI political spying scandal was revealed, this time involving our friends at School of the Americas Watch.

Given the FBI’s systematic abuse of their authorities, we launched a campaign to demand a full investigation. Our Investigate the FBI campaign recognizes that in the past when Congress had taken action it has been, because powerful social movements demanded such. The FBI had operated as a political police force with relative impunity for decades. It took the powerful movements that arose in the 1960s  and 1970s for civil rights and against the war in Vietnam, for black, women’s, and gay liberation and against imperialism to curtail the FBI’s power.  These movements — rightfully — viewed the vast apparatuses of the US security state as a barrier to accomplishing their goals. They recognized that so long as the FBI, and other repressive organs of state power, existed to curtail and police political expression that social change would never be achieved.

The Investigate the FBI Campaign engages the various groups that have been targeted by the FBI –  the environmental, anti-war, economic justice, and racial justice groups, as well as Muslim, Arab, South Asian people and other communities of color.

Our campaign made its public debut on the 45th anniversary of the break-in at an FBI office that  exposed to the public its notorious COINTELPRO program. This break-in was carried out by anti-war activists, individuals who realized that the FBI was spying on and actively undermining their movement, and that ending the war in Vietnam would require ending the FBI’s actions against the anti-war movement. These revelations also led to the first significant attempts at reform of the FBI’s political spying.

We launched our campaign by sending a letter signed by over sixty groups to the House and Senate Judiciary, laying out the publicly available evidence of FBI spying and calling for an investigation. Our campaign was received positively. While revelations about FBI political spying were increasingly falling under the radar due to both media and activist fatigue, our campaign garnered positive coverage in Salon and our policy and legislative counsel Chip Gibbons (then merely our legal fellow) did an extended interview on the Real News Network with Eddie Conway, himself a former political prisoner and member of the Black Panther Party who was targeted by the FBI’s COINTELPRO program.

After this, we began working with a number of groups to educate both members of Congress and the public about the FBI’s misdeeds. Together with representatives of groups and communities that had been targeted by the FBI, we met with members of the House and Senate Judiciary Committees to call for hearings. In June we organized a public forum on “Social Movements and the Surveillance State,” which featured Dr. Maha Hilal of National Coalition to Protect Civil Freedoms, Brandi Collins of Color Of Change, and Hendrick Voss of School of the Americas Watch. The panel discussed the history of the FBI in repressing social movements, and how to fight back, to a packed audience. The panel was broadcast on both Free Speech TV and a local Pacifica affiliate.

In September, we returned yet again to Congress, this time to drop off a letter signed 131 civil society groups and a petition signed by 88,000 Americans. Credo Action, Demand Progress, and Roots Action helped us gather the impressive number of signatures. Our friends at American Arab Anti-Discrimination Committee, Council on American-Islamic Relations, and Democratic Socialist of America helped us bring the weighty petition!

We can’t think of a time when we weren’t concerned about the FBI, but the FBI came under a significant amount of public scrutiny during the Presidential election. First, Republican officials became enraged by what they believed was the FBI declining to indict Hillary Clinton over improper storage of classified emails for political purposes. Yet, this criticism of the FBI was nothing compared to the torrent of outrage that followed FBI Director James Comey’s decision to send a vaguely worded letter close to the election about the potential discovery of new Clinton related emails on another computer. While it turned out there was nothing to warrant the FBI reopening its investigation, many felt that Comey’s letter was politically motivated and some to this day debate the impact it had on Clinton’s defeat.

A number of commentators condemned Comey for politicizing the FBI, noting both the bureau’s post-Church committee track record of being apolitical and its potential to dramatically interfere into US politics. We quickly jumped into the fray to remind people, that the FBI has never been apolitical and its potential to unduly influence domestic politics makes this a huge problem. It is our hope that those now realizing about the harmful impacts of a politicized FBI will join us in calling for Congress to rein in the FBI.

We have never had a President who fully respects dissent, but the President-elect’s brazen hostility towards it is deeply alarming. We know that he called for spying on mosques, increased surveillance, and criminalization of flag burning. His cabinet nominees have a history of suppressing dissent, with his Attorney General nominee having in the past used the FBI to engage in voter intimidation., as well as, having tried to deny free speech rights to LGBT students. A troubling op-ed ran in The New York Observer, which is owned by Trump son-in-law Jared Kushner, calling on the FBI to spy on anti-Trump protesters. As such, we know that close scrutiny of the FBI will be needed in 2017.