Three ways to join us for Spying Dissent: The Surveillance of Activists in the Digital Age 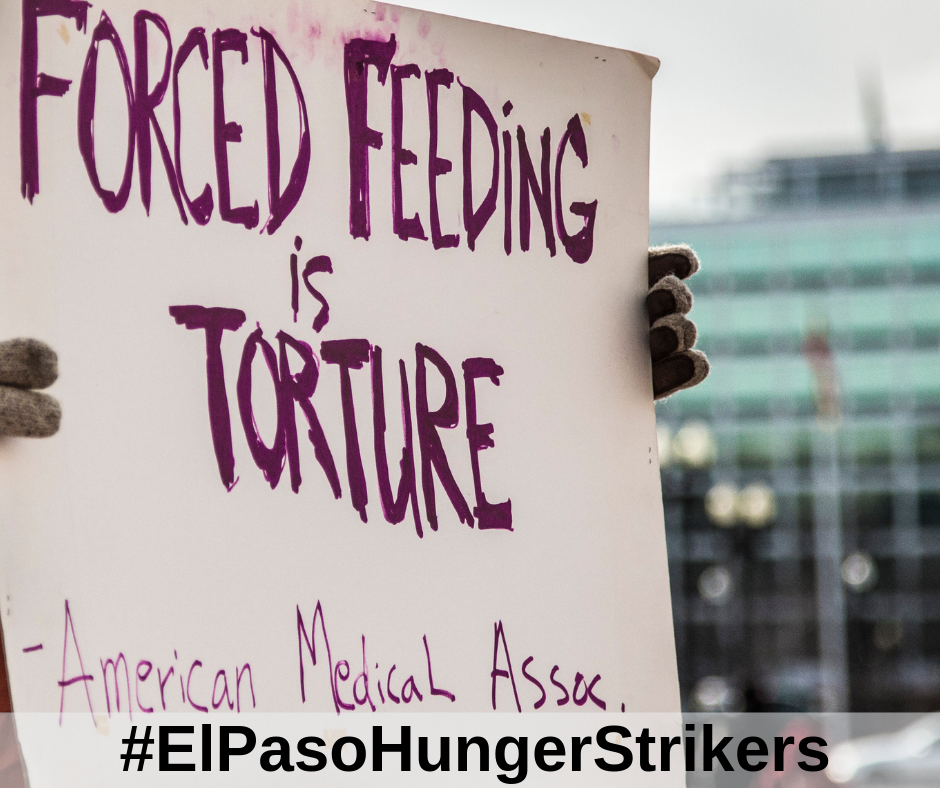 EL PASO, TX — Immigration advocates and medical experts are deeply concerned over the treatment of men engaged in an ongoing hunger strike at the El Paso Service Processing Center and the dire situation facing people held in indefinite detention.

“At this point, having not eaten since December, he can barely walk and hold up his head. In his frail state, thinking and talking are slow and laborious. He must be afforded the opportunity to recuperate outside of detention so that he can prepare for his merits hearing and cross-examination.”

Nathan Craig, a volunteer with Advocate Visitors in Detention, who recently visited one of the hunger strikers in El Paso

Physicians for Human Rights (PHR), which has long argued that force-feeding against an individual’s wishes is unethical and inhumane, says precautions must be taken to ensure those on hunger strike receive adequate medical attention and accommodations. PHR also recommends that Congress fund alternatives to detention programming that represent a long-term solution to prevent human rights violations documented in immigration detention. Below is an official statement by Physicians for Human Rights:

“Hunger striking is a nonviolent form of protest undertaken when other means of expressing grievances are unavailable, and hunger strikers must be protected from any and all reprisals. Physicians for Human Rights calls for all precautions to be taken to ensure that hunger strikers receive needed medical attention, and that accommodations be made to ensure appropriate transport so that they are not injured. Not eating may result in lightheadedness, so wheelchairs should be provided as needed.

“Extensive medical research shows that immigration detention is harmful and strongly correlated with negative mental health outcomes, while prolonged or indefinite detention violates the right to be free from torture and other cruel, inhumane, or degrading treatment.

“The U.S. immigration detention system has repeatedly demonstrated a dangerous lack of accountability and transparency, and the recent hunger strikes are just one more example illustrating this dire situation. As a long-term solution, PHR strongly recommends the use of alternatives to detention that are humane and cost-effective and that have been proven to ensure compliance with immigration enforcement.”

In a separate comment, Altaf Saadi, MD, a neurologist at UCLA and a member of Physicians for Human Rights’ Asylum Network, said,

“Prolonged detention causes significant medical harm to individuals due to both denial and delays in medical care, inadequate staffing, punitive approaches to mental health needs like the misuse of isolation, and harmful conditions of confinement more broadly like poor and overcrowded living conditions. The human toll of detention is compounded for those already vulnerable and suffering from trauma based on persecution they have endured in their home countries. We don’t want more patients joining the list of those whose deaths have been linked to substandard care in detention, nor do we want to see the lasting impacts of detention-related psychological harm.”

ICE has threatened the hunger-striking men with deportation despite the deterioration of their health.

Immigration and civil rights groups are demanding the immediate release of the men and for them to be able to address their asylum cases outside of detention, as they should have been able to do from the beginning.

“These asylum seekers, like so many before them, resorted to a hunger strike to draw attention to the litany of abuses they face at the hands of ICE on top of the indefinite delays in adjudicating their asylum cases.  We demand the immediate release of all of the detained individuals so they can be cared for by their community. And, we demand an immediate investigation into the civil rights violations, retaliation, and medical negligence at the El Paso Processing Center, a facility that SAALT and our partners have been monitoring and lodging complaints about over the last five years. We know the treatment of detained individuals in El Paso is a microcosm of conditions across detention facilities in this country.”

Members of the coalition formed to support the hunger strikers are:

National Immigration Project of the NLG