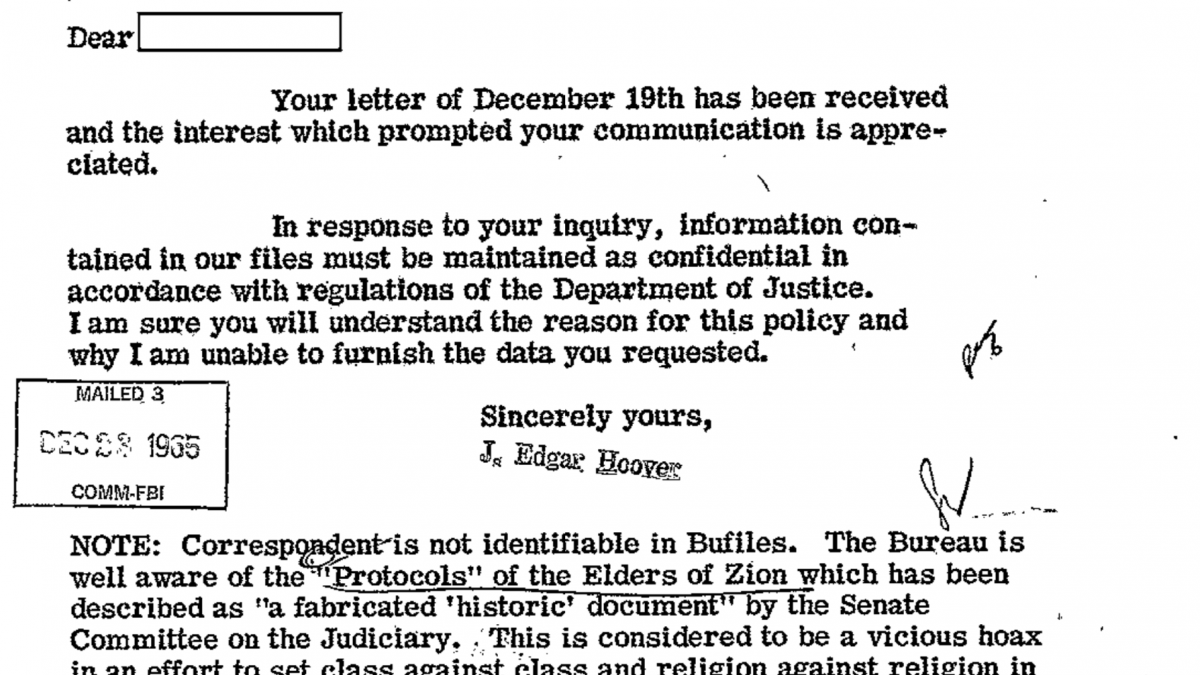 The Protocols of the Learned Elders of Zion are an infamous anti-Semetic forgery. Created to stoke anti-Semetisim in Russia at the turn of the 20th century, they continue to be the centerpiece of bigoted conspiracy theories to this day.

The FBI Vault is an online reading room of FBI files that have been released via the Freedom of Information Act. The Vault does not include every file released by the FBI, but it is supposed to contain documents that are historically significant or frequently requested. An FBI twitter account tweets out links to documents on the Vault.

On August 19, 2020, the verified account @FBIRecordsVault tweeted the words “The Protocols of the Learned Elders of Zion” followed by a link to a 139 page PDF that begins with a reproduction of the anti-Semetic text. Many people were livid that the FBI would share such a notoriously anti-Semetic (and false text) without context.

And their concerns were well-placed. On social media, anti-Semites publicly championed this tweet as confirmation of their vile conspiracy theories and as evidence of the truthfulness of their claims.

So why did the FBI do this? The FBI has since deleted the tweet and apologized, claiming the account is automated. It is worth noting that this is not the first time the FBI Vault’s twitter habits have aroused controversy. In November, 2016, right before the presidential election, the FBI Vault’s twitter account ended a period of extended dormancy to tweet out files pertaining to investigations of the Clinton Foundation. The FBI responded similarly that the system was automatic, but due to a technical glitch that had gone unnoticed the account had not tweeted for over a year. An internal FBI report affirmed that explanation.

The FBI’s files on the anti-Semetic forgery certainly do offer unsettling historical insights into the Bureau. Some of the files pertain to information gleaned from an informant as part of a 1941 espionage investigation, likely into Nazi sympathizers. Others discuss a 1964 announcement by the Senate Subcommittee on Internal Security declaring the Protocols to be a forgery (something that was well-known by then, but nonetheless was helpful to reiterate).

But the bulk of the files dealt with J. Edgar Hoover’s correspondence with the general public.

For decades Hoover personified the FBI. He crafted a public image of himself as a crusader against communism and crime. As a result of this carefully cultivated cult of personality, Hoover was well-known to the general public and thus often received letters from ordinary people. As the Protocols FOIA files show, again and again individuals who shared Hoover’s zeal for fighting communism, sent him copies of the Protocols of the Learned Elders of Zion. In at least one instance, the sender was concerned with alerting Hoover to anti-Semitism, but the bulk of senders appear to believe in the veracity of the document. While the Protocols make no reference to communism, the overlap between anti-Semetic conspiracy theories and anti-Communism led those who believed in a Jewish communist conspiracy to latch onto them as proof. It is unsurprising, though depressing, that with Hoover painting himself as the nation’s frontline opponent of communism that so many anti-Semites thought they had an ally in him.

So how did Hoover respond to them? 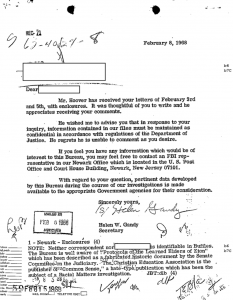 Time and time again Hoover (or his secretary) responded with pro forma letters that contained platitutes such as, “It was thoughtful of you to write and he appreciates receiving your comments” or “I appreciate the thought that prompted you to write me as you did.”

Internally, however, the FBI’s notations make it clear that they were well aware of the document and knew it to be an anti-Semetic forgery. Yet, instead of alerting the sender to this information they elected to applaud them for their thoughtfulness in seeking out Hoover’s sage counsel. While these form letters could be viewed as empty platitudes, in the context of having received an anti-Semetic letter they could be read as encouragement or endorsement. It was recklessly irresponsible for the FBI to applaud the thoughtfulness of anti-Semetic cranks who wrote to Hoover.

Hoover may be gone, but the FBI Vault doesn’t need to repeat his carelessness. While they have deleted the tweet in question, it’s not quite clear they are willing to admit that, intentionally or not, the FBI gave a sense of validation to a lot of anti-Semitic conspiracists.