On #GivingTuesday, Remember That Protest is Priceless

Defending Rights & Dissent Condemns Use of Tear Gas Against Refugees

Moments ago the United States Senate voted to discharge the bipartisan Yemen War Powers Resolution. This mean the Senate will debate and vote on the ongoing illegal, unconstitutional military action in Yemen.  The resolution brought by Sen. Mike Lee (R-UT), Sen. Bernie Sanders (I-VT), and Sen. Chris Murphy (D-CT) is an important step for Congress to reclaim its constitutional war powers

While today was only a procedural vote, it is historic in nature.

War Powers Resolutions are by their very nature privileged, meaning their sponsors can in theory bypass committees and bring them straight to the floor. Yet, when the same resolution was brought in March the United States Senate completely abdicated its constitutional responsibilities and voted 55-44 to table the Sanders-Lee Resolution. And similar resolutions brought in the House by Rep. Ro Kohana (D-CA) never even got as far their Senate counterparts thanks to a number of dirty tricks played House leadership.

For three years and two presidential administration, the US has been engaged in hostilities in Yemen. The Constitution and the War Powers Act gives Congress the sole power to authorize military force. Yet, Congress has voted to authorize US military participation in the Saudi-led war in Yemen

First, there has been consistent grassroots mobilization for ending US participation in the Saudi-led war in Yemen. This outpouring is rooted in frustration with the US’s perpetual state of war and the brutal nature of the Saudi-led campaign Yemen. While the resolution was tabled in March, the closeness of the vote took many observers by surprise. And since then the pressure has only grown, as Saudi atrocities, such as the bombing of 40 children on a school bus, have made international headlines.

Second, many who many not have been paying attention to the war in Yemen before were horrified by Saudi government’s brutal murder of journalist and US resident Jamal Khashoggi inside their own consultant. As result, many are fed up with the endless blank check for Saudi human rights abuses.

In October, Defending Rights & Dissent explained why we as a civil liberties organization supported a similar resolution in the House:

Whether you think US intervention in Yemen is a good idea or a bad idea, this is a matter for Congress to decide. Before undertaking such a military action the people have a right to weigh in on whether they think such action is justified, within our national interests, and/or morally acceptable.

We know this type of conflict can quickly escalate. In 1959, the US had just 750 military advisers in Vietnam. Less than a decade later, we had over half a million troops there. The very real danger of escalation is precisely why the War Powers Act defines hostilities requiring Congressional authorization broadly.

We need to have a say. Enough is enough when it comes to unauthorized war.

Defending Rights & Dissent and its predecessors organizations have always opposed unauthorized, unconstitutional military actions. This includes a campaign in the 1980s and 1990 against CIA covert action, support for the Yemen War Powers Resolution, or calling for the AUMF to be repealed. 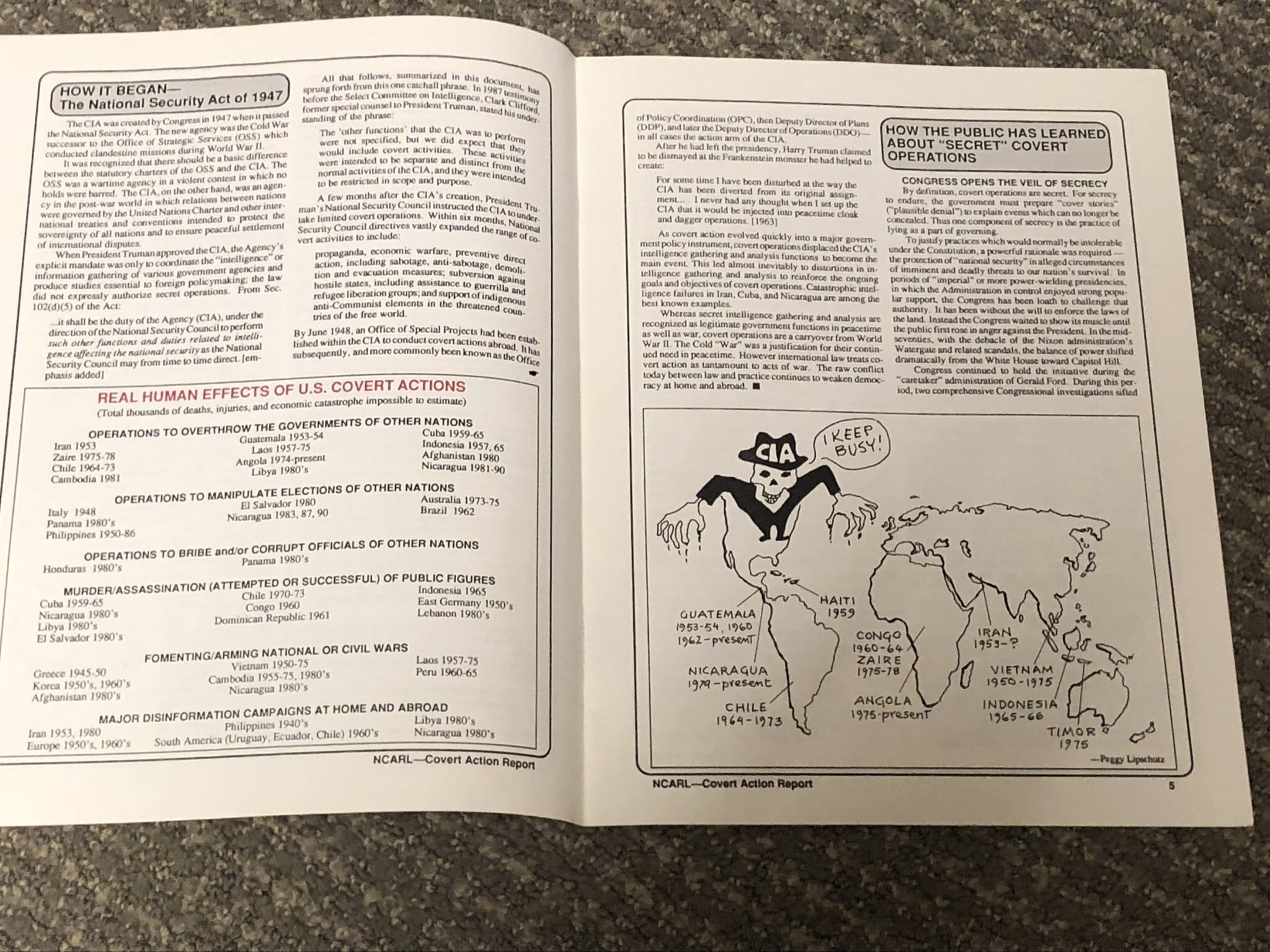 Picture of 1990 report on CIA covert actions published by the National Committee Against Repressive Legislation, a predecessor to DRAD

Coming up, our policy director @ChipGibbons joins @FlashpointsNews on @KPFK to discuss the Espionage Act and a new lawsuit against Mike Pompeo.

It's been one year since the US withdrew ground troops from Afghanistan. Those responsible for the 9/11 attacks are dead or captured.

Isn't it time to repeal the AUMF and End the War on Terror at Home and Abroad?