The FBI Is Not Worthy of the Public’s Trust 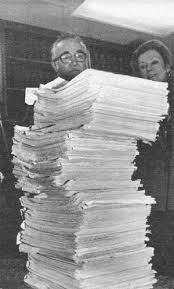 Frank Wilkinson with some of the 132,000 pages from his FBI file

But, we are also an organization that was targeted by the FBI… which we found out thanks to FOIA.

This article about Frank Wilkinson, one of the founders of the Defending Dissent Foundation (known at the time as the National Committee to Abolish HUAC), was published on February 24, 1989 in the Los Angeles Times. It was written by Kim Murphy.

Civil liberties activist Frank Wilkinson barely remembers the woman who rushed up to the podium on Bill of Rights Day in 1955, congratulated him on his speech denouncing the House Committee on Un-American Activities and urged him to speak to her political group in San Diego.

About a year later, Anita Edith Schneider stood before the House committee and branded Wilkinson a communist. Wilkinson recognized her as the woman who had approached him at the podium that day. He hadn’t seen her since. Still, the U.S. Supreme Court, deeming Schneider a “reliable witness,” upheld Wilkinson’s conviction for refusing to answer the committee’s questions in one of the most important civil liberties cases to come out of the McCarthy era.

Now, a team of civil rights lawyers backing Wilkinson’s campaign to learn why the FBI investigated him for nearly 30 years say they have uncovered new evidence that the FBI knew Schneider could not be believed when her testimony was used to convict Wilkinson in 1959. He eventually served nine months of a one-year prison term.

Among 132,000 pages of surveillance documents recovered in Wilkinson’s lawsuit against the investigative agency is a 1961 FBI memorandum reporting that Schneider had “exhibited emotional instability” at a hearing in 1955 and stating that information on Wilkinson’s alleged Communist Party membership therefore “comes from sources not considered advisable to use as government witnesses.”

Based on the newly recovered document, which remained classified until last year, the American Civil Liberties Union and the Los Angeles law firm of Loeb & Loeb filed a new petition Thursday to set aside Wilkinson’s contempt-of-Congress conviction, alleging that the government deliberately concealed evidence that Schneider was unreliable.

“We have a government which had in its possession information that clearly related to the reliability, the credibility, of the only witness whose testimony was used to convict Frank Wilkinson of contempt of Congress,” attorney Douglas E. Mirell said. “We believe that in fact a fraud was perpetrated by the government upon the judicial system.”

Wilkinson and his attorneys say they know nothing about Schneider, except that she identified herself to Wilkinson as head of a San Diego Democratic Party organization and another group battling the House Committee on Un-American Activities.

She testified before the committee in Los Angeles on Dec. 7, 1956, saying that, during her membership in the Communist Party from 1951 to 1955, she knew Wilkinson to have also been a member of the party.

The courts later ruled that her testimony constituted probable cause for the committee to subpoena Wilkinson to testify, setting the stage for his criminal conviction when he refused to answer the committee’s questions about his party membership.

Wilkinson now says that Schneider’s statements to the committee were false. But he still will not say whether he was ever a Communist Party member. “I went to jail to uphold the principle of not being compelled to answer that question, and that is my position today,” he said.

Wilkinson first caught the FBI’s eye when he led a move to integrate public housing in Los Angeles in the 1940s. He and integrationist Carl Braden were the last of 36 Americans who served prison terms for butting heads with the Un-American Activities Committee.

Their case, decided on a 5-4 vote of the Supreme Court, set important guidelines for the power of citizens to shield themselves behind the First Amendment when challenging Congress’ investigative powers.

Wilkinson, 74, learned of the FBI memorandum as part of the settlement of his lawsuit against the agency, under which he sought access to documents the FBI accumulated in its three-decade investigation of him and the nationwide group he founded to combat the Un-American Activities Committee. The group now is known as the Bill of Rights Defense Committee/Defending Dissent Foundation.