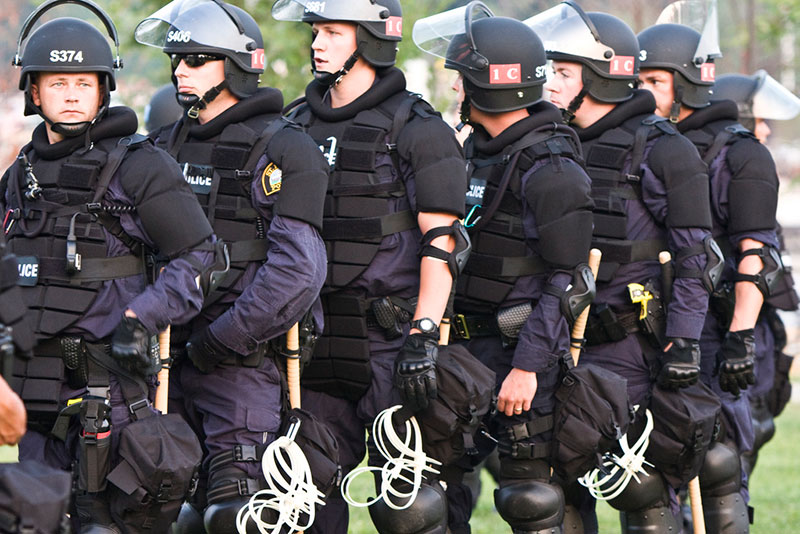 Law enforcement officers lined up in riot gear during the 2008 Republican National Convention. Photo by Tony Webster /CC BY 2.0

You’re probably heard that the Republican Party is having a get-together in Cleveland, Ohio, in July. It’s a little party they throw every four years called the Republican National Convention, and it promises to be extra-special this time around. So special, in fact, that the Cleveland Police Department has already made up a shopping list (see Schedule of Items section) of items to use and wear, including 2,000 sets of riot gear, 310 sets of riot control gear, and 25 sets of tactical ballistics armor, according to attorney Jacqueline Green of the National Lawyers Guild.

Cleveland has been granted $50 million from the federal government to use on security measures for the convention, and after the party is over, the city gets to keep all the “party favors” it bought. Groups including the ACLU, Code Pink, the NAACP, the National Lawyers Guild, and BORDC/DDF would like to know exactly what is included in this “unprecedented amount of riot gear and security equipment.” All told, the security gear accounts for $20 million of the $50 million granted, with the other $30 million going toward personnel costs related to hosting a major political party convention. The city of Cleveland’s statement regarding the RNC simply says, “We will not discuss operational security matters,” and ends with this somewhat off-putting sentence: “All requests regarding security issues will be referred to the Secret Service.”

BORDC/DDF’s National Field Organizer, George Friday, is working with our grassroots partners in Cleveland who are concerned because cities that beef up security for a convention stay beefed up after all the politicians and delegates have gone back home. Surveillance cameras that were installed for the event stay where they are and keep recording. And all of the tactical ballistics armor and the 26-inch batons and the bicycle riot control gear — ordered for a police department with no bicycle unit and no known plans to start one — get to stay where they are, too. The concern is that, with all that shiny riot gear sitting on the shelf, the police may start to find more reasons to use it.

Many people would argue that the conditions surrounding the GOP race for the candidacy this year and the possibility of a brokered convention could well require extra security equipment. After all, front-runner Donald Trump himself has declared that, if he is not handed the nomination, “I think you’d have riots.”

But cooler heads are thinking about the consequences of what hotheads might do. At a March 21 protest at Cleveland City Hall organized by the Greater Cleveland Civil and Human Rights Coalition and Cleveland Peace Action, Jeff Miller of ACLU Ohio talked about “the continuum of force,” saying that equipment on the high end of the continuum must be handled properly, and added, “… no one here wants the police to be unprotected, but no one here wants to see citizens on the receiving end of police violence.” Another issue of concern is the fact that some of the gear may arrive too close to the convention start date to allow police officers adequate time to be trained in its proper use.

The RNC in July will be a National Special Security Event. That means it is being planned in coordination with the Secret Service. According to their website, “The Secret Service has developed a core strategy to carry out its security operations, which relies heavily on its established partnerships with law enforcement and public safety officials at the local, state and federal levels. The goal of the cooperating agencies is to provide a safe and secure environment for Secret Service protectees, other dignitaries, the event participants and the general public.”

It is telling that Secret Service protectees are listed first and the general public is listed last. Attorney Jacqueline Green said at the protest on March 21, “We call on the mayor, the Cleveland division of police, and city council to protect the residents of the city, visitors, and convention participants equally.”

BORDC/DDF is helping local activists uncover the details of the militarization of the Cleveland police department. As Julia Shearson of the Cleveland Chapter of the Council on American-Islamic Relations of Ohio said at the protest, “I think it’s unacceptable to protect a private political party and leave the people of this city out of this decision.” Cleveland Peace Action decried the lack of “a meaningful and transparent process whereby citizens can be informed and provide public comment in a timely way about the equipment that the city will be purchasing.”

We want to know what equipment is going to be at the disposal of the Cleveland Police Department during and after the July RNC. We also want military-style equipment that is not essential to normal policing activity to be decommissioned after the convention, and we want the rights of protestors at the RNC to be upheld. Therefore, BORDC/DDF has filed a public records request with the Cleveland City Council, asking for information about all equipment being acquired for the convention and about any plans that have been made regarding political protests and demonstrations. We have also begun to unite and educate Cleveland-area residents who plan to protest the convention about what rights they have and what they can expect to encounter.

Dan Williams, a spokesman for Cleveland Mayor Frank G. Jackson, said of the upcoming RNC, “We’re expecting people to come and behave, have a great time, leave happy and content.” We also want to make sure that protestors leave safe and sound.