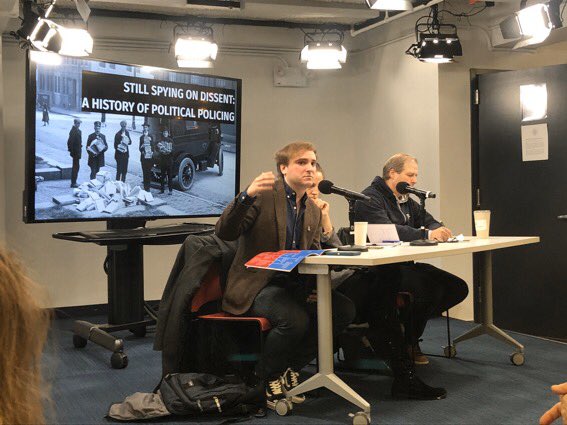 Around 100 people gathered at The People’s Forum last Thursday, for a discussion of “Still Spying on Dissent: The History of Political Policing.” The event showcased Defending Rights & Dissent’s groundbreaking report Still Spying on the Dissent: The Enduring Problem of FBI First Amendment Abuse and comes on the heels of the 100th Anniversary of the Palmer Raids, one of the most notorious abuses of civil liberties in US history.

The panel featured Chip Gibbons, Defending Rights & Dissent Policy Director and author of Still Spying on Dissent, Alice Speri, a journalist with The Intercept, and Alex Vitale, a professor of sociology and author of The End of Policing.

Chip started the panel off by explaining why the report was written. He stressed how when there were media reports of FBI political surveillance, they failed to make connections between surveillance of different political movements. By compiling together all of the known incidents of FBI surveillance in the last decade, and explaining the historical context, it  becomes clear political policing was a systemic problem.

Chip went through the history of the FBI, explaining how it was created without the approval of Congress and to this day lacks a legislative charter. Chip explained how the FBI was not just a law enforcement agency, but an intelligence agency and that its early intelligence compartment was responsible for the Palmer Raids. Chip went through the history of FBI political policing covering everything from the Security Index and COINTELPRO to discussing how the agency visited Arab Americans in the run up to the Gulf War. Stressing that this was not just history, Chip ended with the recent instances of FBI First Amendment abuse documented in the report.

Alice Speri discussed her reporting, as well as, the reporting of other journalists at The Intercept. She discussed the FBI’s Black Identity Extremism assessment, which concocts a made up threat in order to justify surveilling racial justice activists. She noted the assessment was poorly constructed and overly broad. Alice also discussed how while it was reported that Rakokem Balogun was the first “Black Identity Extremist” prosecuted by the FBI, the term was retroactively applied to two activists in Ferguson, Missouri, Brandon Orlando Baldwin and Olajuwon Ali Davis. The FBI arrested Baldwin and Davis after they were ensnared in an FBI terror sting, in which an FBI confidential informant acted as an agent provocateur.  Alice also discussed the role of informants at Standing Rock, noting the case of Red Fawn Fallis. Fallis was convicted of illegal firearm possession. The gun belonged to her romantic partner, who unbeknownst to her was an FBI informant.

Alex Vitale made the case that all policing is political. As a police abolitionist, Alex argued that policing  “exists to facilitate regimes of exploitation,” which is inherently a political project. Alex said modern policing began approximately 200 years ago and thus in its early form was tied to the rise of the mass industrial working class, colonialism, and slavery. He notes that the first state police force in the US, the Pennsylvania State Police, was formed to suppress labor movements in the coal fields and steel mills. It was, however, directly based on the model of the US occupation of the Philippines. As a result, arguments for reforming the police through greater professionalization or adherence to “proper legal frameworks” are not actual solutions to police abuse. As Alex argued, slavery was never against the law and thus slave catchers were not acting outside the “rule of law.”

Nonetheless, Alex argued that political policing never operates within the law. It is always part of a “state of exception.” This makes clear that at the end of the day political policing, or any policing, is not about the rule of law, but the law is just a “reference point.” Alex also shared a personal story about his family and political policing. His father grew up in a coal mining town. As a high school student, he did his senior project on the Abraham Lincoln Brigade (the American volunteers who fought against fascism in the Spanish Civil War). After finding and interviewing several nearby veterans of the brigade, the FBI showed up at Alex’s father’s house.

The event was jointly sponsored by Defending Rights & Dissent, The People’s Forum, Verso Books, and The Intercept.