The NYTimes reported today that the FBI has increased its use of sting operations in ISIS cases. While any attention paid to the Bureau’s is welcome we must be clear: this is not a new tactic.

According to a 2014 study, Illusion of Justice: Human Rights Abuses in US Terrorism Prosecutions, by Human Rights Watch,

in some cases the Federal Bureau of Investigation may have created terrorists out of law-abiding individuals by conducting sting operations that facilitated or invented the target’s willingness to act. According to multiple studies, nearly 50 percent of the more than 500 federal counterterrorism convictions resulted from informant-based cases; almost 30 percent of those cases were sting operations in which the informant played an active role in the underlying plot. In the case of the “Newburgh Four,” for example, a judge said the government “came up with the crime, provided the means, and removed all relevant obstacles,” and had, in the process, made a terrorist out of a man “whose buffoonery is positively Shakespearean in scope.”

A 2014 study, “Inventing Terrorists: the Lawfare of Preventive Prosecution” by Project Salam and the National Coalition to Protect Civil Freedoms, found that almost every domestic terrorist plot from 2001 to 2010 was in some way cooked up or assisted (and eventually “busted”) by the FBI. The report analyzed about 400 domestic terror cases and found only that only four cases were initiated or driven without the encouragement of the bureau. The study author’s summarized their findings as follows: 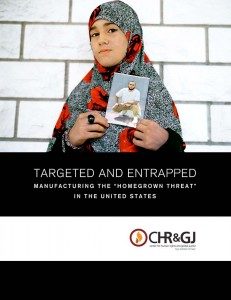 “Targeted and Entrapped” Report, from CHRGJ

A 2012 report by the Center for Human Rights and Global Justice and the International Human Rights Clinic also studied the use of sting operations and asserted that “the government’s use of intrusive surveillance, untrained paid informants, and manufactured terrorism plots raises serious human rights concerns that must immediately be addressed.”

While outrage has rightly been focused on Donald Trump’s Islamo-racist rants, attention should also be paid to the Bush and Obama Administrations’ long-running counterterrorism policies that fan the flames of bigotry. The use of paid informants to entrap and demonize vulnerable members of the Muslim community has been a centerpiece of the FBI’s war on terror since 9/11.

And it works well for them: each plot they foil is a feather in their cap, but it also boosts the number of terror plots that are supposedly threatening the homeland.

But the consequences for the Muslim community have been severe. These fake plots provide “evidence” for the media and unscrupulous politicians to demonize all Muslims and equate terrorism with Islam. Informants target members of the community who are vulnerable, often facing mental, emotional, and financial challenges, and manipulate them. In court, their strong religious or political beliefs are turned against them.

Expressions of outrage over Abu Graib or Guantanamo is used as evidence of a predisposition to commit a criminal act, and justification for the sting operation itself, raising serious First Amendment concerns.

Entrapment is notoriously difficult to prove in court, and the FBI has thus far been able to successfully dodge that charge. But, that doesn’t mean the use of informants has been ethical, fair, or Constitutional.

In 1969, when Hoover's wiretaps on King were revealed, Clark called on him to resign.

Two years ago, the US government unsealed its secret indictment against WikiLeaks publisher and Australian national Julian Assange escalating its war on journalists' sources into a global war on journalism.