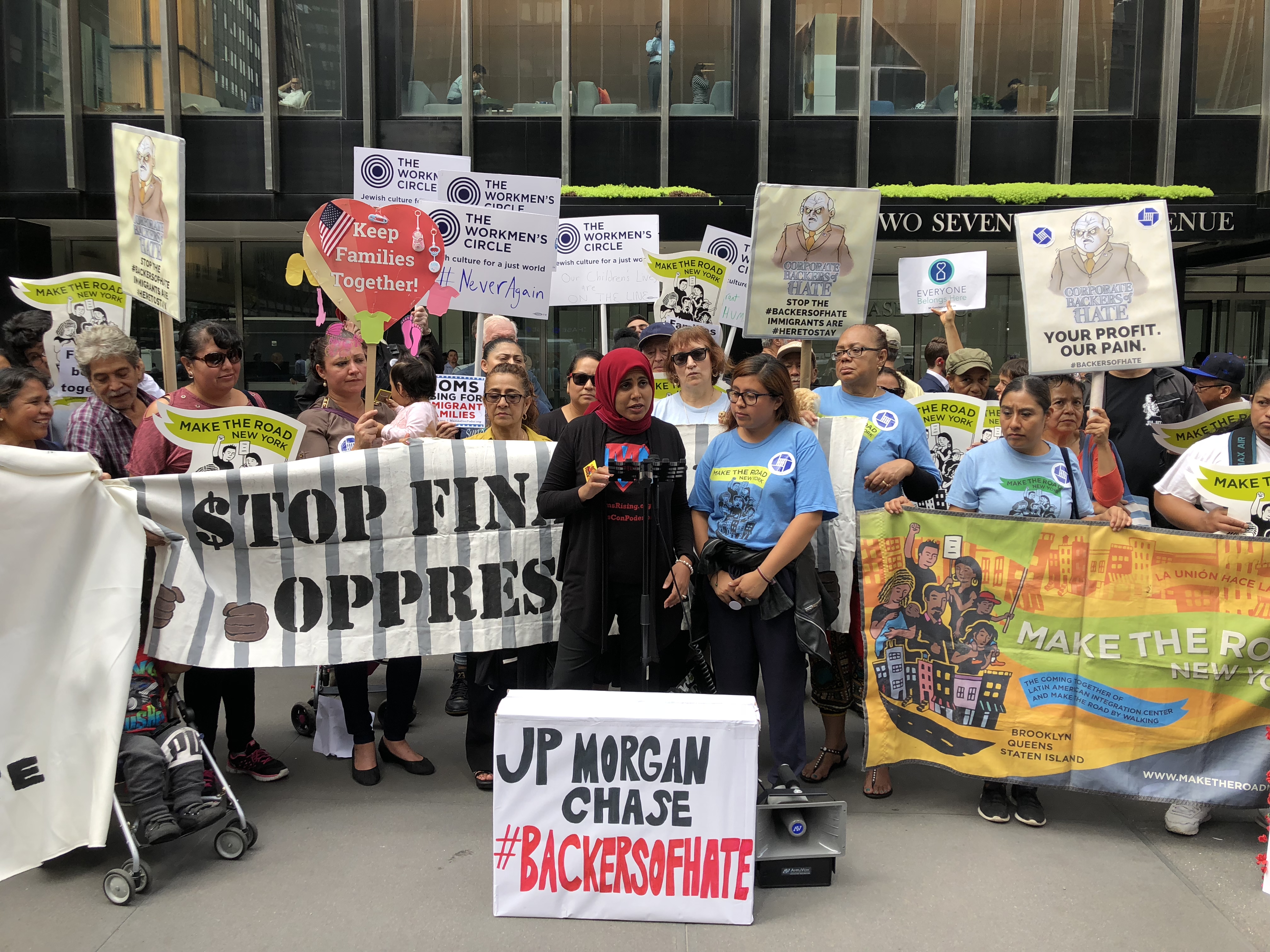 Hundreds of protesters, including moms, kids, immigrants and allies, rallied outside of the headquarters of JPMorgan Chase in New York City and Wells Fargo in San Francisco today to urge the banks to stop financing Geo Group and CoreCivic, two large for-profit prison corporations that are profiting off the pain and separation of immigrant families.

“We will hold Wells Fargo and JP Morgan accountable for their complicity in ripping apart families and imprisoning children and their parents, whose only crime is seeking a better life, or a livable life, here in the United States,” said Sue Udry, Executive Director of Defending Rights and Dissent. “No less than the corporate jailers themselves, these banks prop up and exploit a racist and unjust system of mass incarceration for profit that must be ended.”

The day of action was led by the #FamiliesBelongTogether coalition, which has helped lead the fight against the Trump Administration’s cruel immigration policies since organizing the historic national day of action. The coalition is made up of more than 100 organizations representing tens of millions of members nationwide, including DRAD, MomsRising, Presente.org, National Domestic Worker Alliance, the Center for Popular Democracy, MoveOn, Make the Road New York, Hand in Hand, In The Public Interest, Little Sis, AVAAZ, Enlace, Candide Group, CREDO, CMSM, Courage Campaign and more.

Thank you Pat for dropping off a letter to your local bank branch to urge @WellsFargo & @PJMorgan to stop financing pain! Thank you for raising your voice at this critical time! #FamiliesBelongTogether #BackersOfHate pic.twitter.com/cNASNQJ4ol

In all 50 states, more than 7,000 people have committed to deliver letters urging local JPMorgan Chase and Wells Fargo branches to stop financing Geo Group and CoreCivic. Protesters will also deliver more than 400,000 signatures and letters to these companies, which they deem to be #BackersofHate, alongside symbolic items like stuffed animals and blankets to represent the children still detained and separated from their families. Just this week, the Trump Administration escalated its attacks on immigrants by pushing out a new “public charge” regulation proposal that, if adopted, would make immigration a pay-to-play game, putting the wealthy ahead of families who’ve waited years to be reunited.

“Americans won’t stand by while politicians and corporations profit politically and financially from tearing apart families and traumatizing children. CoreCivic and Geo Group are major Republican donors that are cashing in on the Trump administration’s cruel plan to mass-incarcerate even more immigrant children, and they are getting help from big banks. Hundreds of thousands of Americans  are telling JPMorgan Chase and Wells Fargo: children’s lives are not for sale,” said Jess Morales Rocketto, director of the Families Belong Together Coalition and political director of the National Domestic Workers Alliance. “While our elected leaders fail to hold the Trump administration accountable for creating this humanitarian crisis, parents, grandparents and Americans of all backgrounds will force accountability by removing their money from banks that deal in detention and abuse and training others how to do the same.”

“Every family should have a safe bed to tuck their children into at night, but CoreCivic and Geo Group are profiting off of traumatized children and families who are separated and locked up just for seeking that safety,” said Kristin Rowe-Finkbeiner, Executive Director of MomsRising. “Moms make most consumer decisions for families and we care deeply about how our banks are using our deposits. We will not stand for our banks to be complicit in the Trump Administration’s treatment of immigrant children and families. We can create a fair immigration process that respects all families and our banks must be part of the solution, not part of the problem.”

Yaritza Mendez, Immigration & Civil Rights Coordinator at Make the Road NY, said, “We have stood outside Jamie Dimon’s house and played for him the cries of immigrant children. Now we stand outside his office because one of those children has died. JPMorgan Chase has refused to withdraw from financing private prisons and immigrant detention companies despite the horrors taking place at their facilities. Our loved ones and neighbors are being criminalized and put in cages, and it must end. We will continue to stand up to JPMorgan Chase and Jamie Dimon until they stop bankrolling oppression.”

“Wells Fargo and JPMorgan Chase should not be in the business of caging our families and destroying our democracy,” said Matt Nelson, Executive Director of Presente.org, the nation’s largest online Latinx organizing group. “These huge banks cannot ask for our business by day and help lock up our families at night. We’re demanding real leadership — not just platitudes from Wells Fargo and JPMorgan Chase. Our 500,000 members across the country will only support companies who are not afraid to protect our human rights.”

“The systemic injustice which profits from detaining and abusing our immigrant sisters and brothers, including large numbers of children, must end,” said Eli McCarthy, Director of Justice and Peace for CMSM, the national organization serving the leaders of U.S. Catholic men’s religious brothers and priests. “Wells Fargo and JP Morgan Chase directly enable the caging of families by financing for-profit prisons such as CoreCivic and GEO. Meanwhile, many congresspersons receive direct financial contributions from these banks and these prison companies.”

“By investing in private detention centers, these banks are knowingly supporting a system that is caging immigrant families for profit,” said Ana María Archilla, Executive Director for the Center for Popular Democracy. “Our work will not be over until immigrant families can live in freedom, with no fear of being detained because of their nationality or how they look and with all the tools they need to be able to thrive.”

“It’s time that we hold Wall Street accountable for enabling Donald Trump to fulfill the racist promises he ran on,” said Jeremy Mohler, Communications Director, In the Public Interest.

“Wells Fargo and JP Morgan Chase need to get out of the mass incarceration business,” said Heidi Hess, Co-Director of CREDO. “Both banks have made huge profits financing the private prison corporations that carry out Donald Trump’s barbaric family separation and deportation agenda. If they don’t immediately divest, customers with a conscience will choose to take their business elsewhere. I am proud to announce that CREDO has severed its financial relationship with Wells Fargo. We stand with immigrants and call on big banks to stop profiting from the pain of our communities.”

“Both JP Morgan Chase and Wells Fargo have ESG policies that explicitly reference a commitment to human rights. Given the daily human rights violations occurring in family detention centers and private prisons, their continued support of the private prison industry we believe only serves to widen the credibility gap that these companies face with both consumers and investors. It’s hard to see how this is good for business” said Morgan Simon, Founding Partner at Candide Group, a Registered Investment Advisor.

Approximately 71% of the average daily population in ICE custody are held in privately operated jails. Since ICE was created in 2003, 85 detention centers nationwide have reported a total of 176 deaths. CoreCivic and GEO Group depend on debt financing from banks, including JPMorgan Chase and Wells Fargo, to conduct their day-to-day business operations, finance new facilities, and acquire smaller companies.

An analysis of U.S. Securities and Exchange Commission (SEC) filings over the past ten years shows that Wells Fargo and JPMorgan Chase has played a leading role in financing these debts. JPMorgan Chase is the single largest financier to GEO Group and CoreCivic, holding 62 percent more debt than the second biggest lender to these two corporations. In doing so, these companies are complicit in and profiting from the mass incarceration and criminalization of immigrants and continuing detainment of immigrant families by the Trump administration.

The millions of Americans represented by the #FamilesBelongTogether coalition, made up of more than 80 organizations, call on Wells Fargo and JPMorgan Chase to end this complicity and immediately stop their financial support for GEO Group and CoreCivic, private prisons that are profiting from mass incarceration and the criminalization of immigration.