Why BORDC/DDF is Joining the Campaign to Exonerate Ethel Rosenberg: The evidence just didn’t add up.

Why BORDC/DDF is Joining the Campaign to Exonerate Ethel Rosenberg: The evidence just didn’t add up. 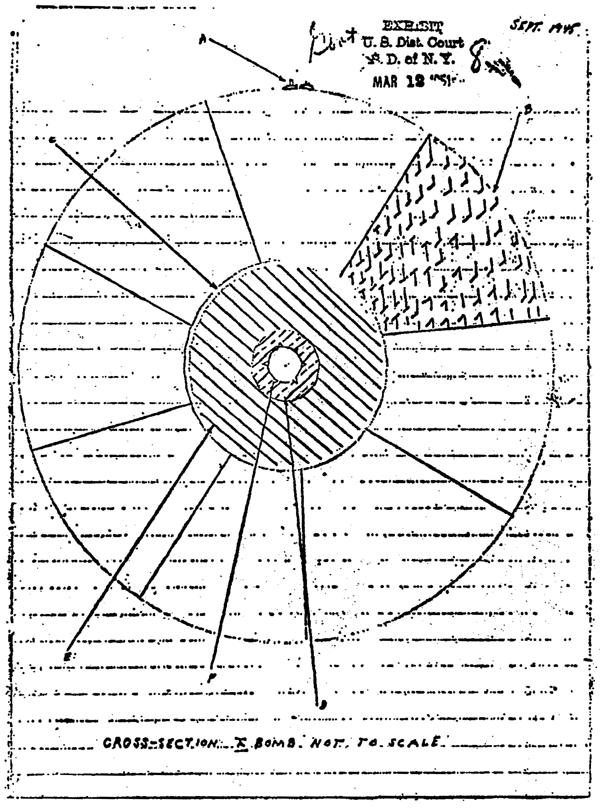 David Greenglass' sketch of an implosion-type nuclear weapon design, illustrating what he allegedly gave the Rosenbergs to pass on to the Soviet Union

In 1953, just two years after being convicted for conspiracy to violate the Espionage Act, Ethel Rosenberg, along with her husband Julius, was executed by the United States government. The Rosenbergs left behind two young children Robert, age six, and Michael, age ten.

The execution sparked considerable domestic and international protests, with figures such as, Pablo Picasso, Albert Einstein, and even the Pope calling for President Eisenhower to halt the execution. In the decades after, the debate over what the Rosenbergs had actually done and the extent to which government misconduct contributed to their conviction raged on. Forty years after the execution, the American Bar Association held a mock trial–presided over by a federal judge–for the Rosenbergs. It resulted in an acquittal.

With the Cold War over, however, formerly classified or unavailable information (including to the prosecutor in the Rosenberg case) became public. It is now known that Julius Rosenberg did engage in espionage for the Soviet Union, though he most likely did not pass on atomic secrets, as he was alleged to have done during the trial. Newly released information though has only served to cast considerable doubt on Ethel’s guilt.

The Rosenbergs were convicted of a conspiracy to commit espionage, not espionage itself, and the role that Ethel was alleged to have played in this conspiracy was largely that she typed up notes from a meeting between her husband, her brother, and sister-in-law. According to the prosecutor, by typing these notes Ethel had “struck the keys, blow by blow, against her own country in the interests of the Soviets.”

The only evidence that such note-typing ever took place was the testimony of Ethel’s brother, David Greenglass, and his wife Ruth. David Greenglass had pled guilty to being a co-conspirator and would spend ten years in prison. He had agreed to cooperate with the FBI in order to keep his wife from being tried. Although she admitted to a role in the conspiracy, she was never charged.

Recently released grand jury testimony shows that David Greengrass made no mention of his sister typing the notes in question. When asked about Ethel’s involvement he repeatedly states that he never spoke to her about the subject and makes no mention of the typed notes.

Thomas S. Blanton, director of the National Security Archive which sued to get the testimony released told the New York Times, “This revelation points to perjury on the stand by David Greenglass”

The released grand jury testimony should not come as a surprise to anyone. In 2001, David Greenglass told a CBS interviewer that he had perjured himself when testifying about Ethel’s involvement. Ruth Greenglass’s grand jury testimony, which was released in 2008, directly contradicts her trial testimony. Ruth Greenglass mentioned handwriting the notes in question and giving them to Julius Rosenberg, with no mention made of Ethel’s striking any keys against the United States.

The “Venona Cables,” the formerly classified deciphered Soviet communications, show that while Julius Rosenberg was involved in espionage, Ethel was never given a code name, indicating a lack of involvement with espionage.

That Ethel was convicted based on perjured testimony is disturbing, but even more disturbing is why she was even charged in the first place. It is apparent that the government knew it lacked sufficient evidence against her, but sought a death sentence solely as leverage against Julius Rosenberg. In essence, the US government held Ethel’s life hostage to use as a bargaining chip against Julius. David Greengrass told CBS that the prosecutor Roy Cohn had encouraged him to perjure himself. This was an abuse of power of the worst sort, as it resulted in the death of Ethel at the hands of the state.

As an organization that fights for government accountability for deprivations of civil liberties, we can take no other position than to join the Rosenberg Fund for Children’s call for President Barack Obama to exonerate Ethel Rosenberg. Her initial indictment was the result of grotesque government abuses of power; her conviction rested on what it is most likely perjured testimony. Given the US government’s cynical lack of concern for the life of Ethel Rosenberg and the fact there exists no known persuasive evidence that she partook in espionage, we ask you to join us in calling for Ethel Rosenberg’s exoneration.