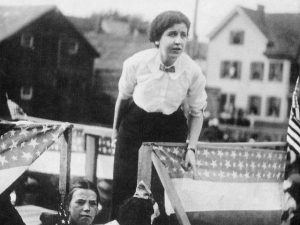 Elizabeth Gurley Flynn was a radical labor organizer, orator, and feminist. She was a member of the Industrial Workers of the World and was involved in important early 20th century civil liberties battles including the Spokane Free Speech Fight. Flynn was also a founding member of the ACLU.

Elizabeth Gurley Flynn was born on August 7, 1890 in Concord, New Hampshire. Her parents were radicals; her father a socialist, her mother a feminist. She was involved in political activism from a young age, and gave her first public speech when she was only 16. For her political activities she was expelled from her high school in 1907.

Flynn and the IWW

In 1908 Flynn joined a radical labor organization the Industrial Workers of the World (IWW) and became heavily involved in its organizing and agitation. As a member of the IWW she organized Mine Workers in Minnesota, and joined the Spokane free speech fight.

“The IWW has been accused of pushing women to the front. This is not true. Rather, the women have not been kept in back, and so they have naturally moved to the front.”

The Spokane Free Speech Fight was a campaign of civil disobedience to repeal a Spokane city ordinance prohibiting public speaking. The IWW had sent out a call to members across the country under the slogan “Wanted-Men to fill the Jails of Spokane.” Wobblies from across the country flocked to Spokane and Flynn was no exception.

While most Wobblies simply stood on a soapbox began speaking and waited to be arrested Flynn went further. While she was speaking in Spokane she chained herself to a post forcing the police to spend even more time than usual to arrest her. After her arrest Flynn continued to give dispatches to the IWW’s newspaper, the Industrial Worker, from inside the prison and helped expose the horrible conditions inside the Jail.

After the IWW victory in Spokane, she returned to the east coast in 1912 to aid the IWW in the Lawrence Textile Mill strike, better known as the “Bread and Roses” strike. Most of the unorganized textile workers were young immigrant women, and the images of the brutal treatment of the striking workers brought national sympathy to the cause. Eventually this strike also ended in victory when the Mill owners capitulated to most of the union demands on March 12, 1912.

During the Lawrence textile strike Joe Hill, a fellow Wobbly and Swedish Immigrant, wrote “The Rebel Girl” as a tribute to Elizabeth Gurley Flynn and the title stuck. Flynn, by this point a celebrity within the labor movement, continued her labor activism traveling across the country and helping to organize in Pennsylvania, New Jersey, New York, and Massachusetts. During these campaigns Flynn was arrested more than ten times but was never sentenced to prison; these arrests were not serious attempts at prosecuting her but of harassing Flynn who was seen as an inspiration to workers within and without the IWW.

Like fellow socialist Eugene Victor Debs, Flynn took a dim view of the First World War and like many other war opponents she was arrested for her public opposition to American involvement. Flynn was charged with violation of the espionage act, though the charges were eventually dropped. During the war Flynn shifted her focus to defending immigrants who were being threatened with deportation due to their opposition to the war.

Her concern for defending the rights of freedom of expression, especially for immigrants, led her to help found the American Civil Liberties Union. She was elected to the board of the ACLU and was active in the organization throughout the 1920’s.

From 1926 to 1936 Elizabeth Gurley Flynn lived in Portland Oregon with Marie Equi, a fellow Wobbly, feminist, anarchist, and birth control advocate. Flynn was in bad health for most of this decade though she did vocally support the 1934 West Coast Longshoremen’s Strike.

In 1936, Elizabeth Gurley Flynn joined the Communist Party. She wrote a feminist column for the party’s publication the Daily Worker, and two years later she was elected to its national committee. Though she was reelected to the board of the ACLU in 1939 her involvement in the Communist Party led to her ouster from the board in 1940.

Flynn in her later years

During the Second World War Flynn did not stop her activism on the home front. Through her column in the daily worker Flynn advocated for equal opportunity for women in the workplace, urged women to volunteer for the military and take war related jobs, and supported the establishment of day care centers for working mothers. In 1942 she ran for congress on a platform stressing women’s issues, and won more than 50,000 votes.

In 1951 as anti-communist sentiment grew in the United States, Flynn and other radicals were arrested and charged under the Smith Act of conspiracy to overthrow the U.S. government. She was convicted in 1953. While Flynn could have avoided Jail time by agreeing to be deported, she chose to remain in the United States, and served her prison term in Alderson Prison, West Virginia, from 1955 till 1957. After her release she was elected National Chairman of the Communist Party a position she held for the rest of her life.

Elizabeth Gurley Flynn died on September 5, 1964 while visiting the Soviet Union. In accordance with her wishes her remains were flown back to the United States to be buried in Chicago’s Waldheim Cemetery alongside the Haymarket Massacre Martyrs. In 1976, the ACLU posthumously restored her membership.

There are currently no events.

Today we joined @korematsu and 80+ orgs to endorse @RepMarkTakano @RepJillTokuda @maziehirono & @SenDuckworth’s legislation honoring Fred Korematsu for his activism against US incarceration of Japanese Americans.

Congress must recognize Korematsu’s legacy as a civil rights hero!

Public records laws are vital to journalism and allow the public to exercise accountability over their officials. The suppression of documents from the public record in Louisiana is troubling.