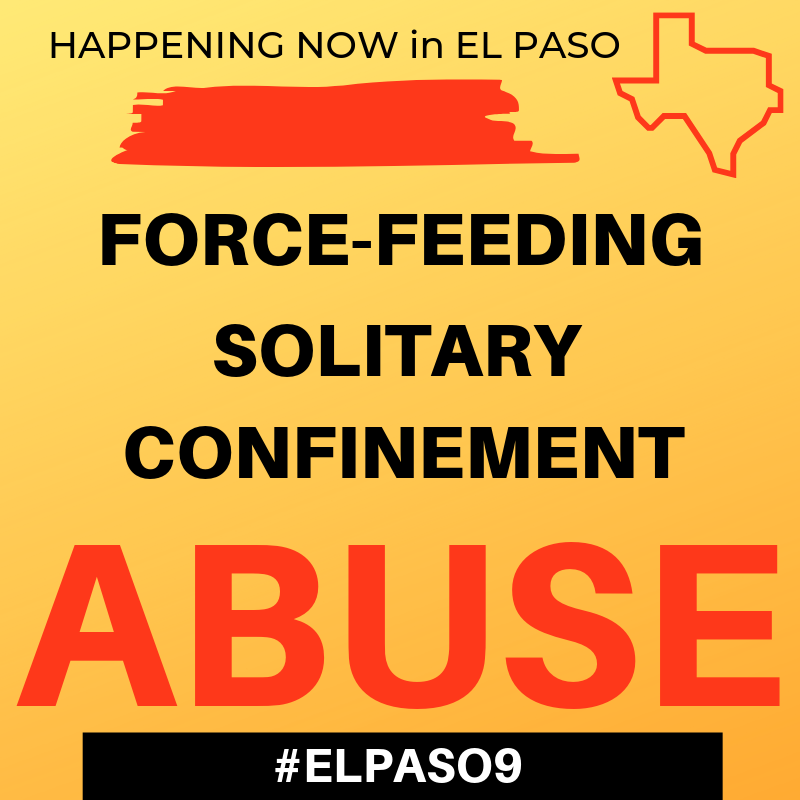 The hunger strike in the El Paso Service Processing Center has entered it’s tenth week. The strike continues despite cruel abuse of the protesters, and even after two of the #ElPaso9 hunger strikers were deported last Thursday.

Health conditions of the remaining men appear to be worsening, according to Nathan Craig of Advocate Visitors with Immigrants in Detention (AVID), who visited with one of the men on hunger strike in the facility this past Sunday.

“By the end of our conversation, he was no longer able to hold his head up…As he rose and attempted to return to his barracks, he wobbled momentarily and collapsed to the floor, his legs folded awkwardly under his thin, frail body…Six privately contracted facility guards stood around him for about five minutes and did little more than pull on his jumpsuit to prop him up and keep him from lying down. No one spoke to him to check on his condition. After some discussion, joking, and muscle flexing among the guards, the six of them picked up the collapsed man by his armpits and took him to an adjacent room.”

Craig and a colleague wrote a devastating account of their visit to the detention facility for The Nation.

The “El Paso 9” hunger strike is a protest against the ongoing delay in hearing their cases, their prolonged detention, and verbal and physical abuse by the guards. The men have been subject to intermittent painful and abusive force-feeding since January and placed in solitary confinement in retaliation for their protest.  Some of the men are still on hunger strike despite this abuse.

“The retaliatory nature of the deportations and treatment that the El Paso hunger strikers have endured is not new, but rather a tried and true tactic that Immigration and Customs Enforcement shamefully employs with the intention to not only harm the individuals impacted but also to silence other individuals in detention from speaking out.”

Last month, 27 immigrant and civil rights groups sent a letter to Department of Homeland Security (DHS) Secretary Kirstjen Nielsen demanding the immediate release of the nine men who had been on hunger strike and an investigation into the facility.  DHS has not responded to the letter. Advocates across the country have been calling the El Paso ICE field office all month to stop the deportations of the #ElPaso9, but it appears phone lines have been disconnected.

Civil and immigrant rights groups continue to demand the immediate release of the men.

“The asylum seekers must be released immediately. ICE has ignored repeated requests from Members of Congress and advocacy groups to allow independent medical and psychological assessments; refused to provide details around adequately meeting language access requirements; and denied placing migrants in solitary confinement. We cannot trust the well-being of these men under their custody.”

Lakshmi Sridaran, Director of National Policy and Advocacy for SAALT.

The following coalition of advocacy groups is working to secure the release and humane treatment of the #ElPaso9 Hunger Strikers:

National Immigration Project of the NLG