Statement on the Potential Prosecution of Julian Assange 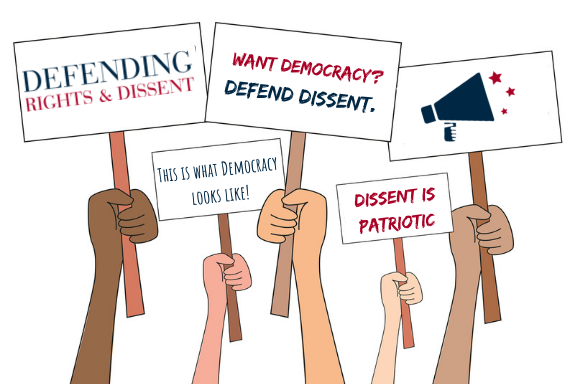 In 2018 DRAD and our grassroots supporters and activists worked hard to to defend the right to protest, challenge FBI abuses, oppose the Countering Violent Extremism program. We also defended whistleblowers, fought surveillance and censorship, championed internet freedom, and continued to rally against Guantanamo and torture.

DRAD mobilized extensively around the trial of protesters arrested in DC on Inauguration Day (known as the J20 defendants).  We spoke at rallies, delivered over 180,000 petition signatures, filed FOIA requests, alerted the UN Special Rapporteur to civil liberties violations, and covered the progress of the trials on our website and  media appearances. DRAD staff published an extended overview of the trials for The Nation. During the course of the J20 proceedings, DRAD staff was quoted in The Intercept on three occasions, and in  Newsweek, Vice, and in smaller outlets like Shadowproof. DRAD staff appeared as commentators on the trials on The Real News Network, Black Agenda Report and Between the Lines.

We are fighting a wave of anti-protester sentiment across the country. DRAD helped activists organizing anti-protest bills in Arizona, Iowa, and Pennsylvania by drafting model letters to the editor, talking points, and organizing coalition letters of opposition to the bill, and mobilizing our grassroots supporters.

DRAD has helped to organize and plays a leadership role in a network of national organizations formed to protect protest rights by providing resources to local activists fighting attacks on First Amendment rights.

We helped to mobilize over 140,000 people to submit comments opposing National Park Service proposals that would restrict the ability to hold protests on the National Mall and in front of the White House.

We supported activists in Portland in their effort to pass a city council resolution to support the right to boycott. We are already working with activists in Charlotte, NC, which will host the Republican convention in 2020 to ensure the rights of protesters are respected, and that equipment procured for the convention does not stay in the city to be used against residents.

We continue to document FBI abuses of First Amendment rights. In October, Policy & Legislative Counsel Chip Gibbons wrote an op-ed for the Washington Post on why the left cannot embrace the FBI.

We updated and re-published our comic book on FBI entrapment called “Manufacturing Terrorists”.

We launched a public education campaign to alert communities about how the FBI’s “Black Identity Extremist” intelligence assessment, which casts racial justice activists as a threat to police is already impacting their community. We’ve met with members of Congress to urge accountability and increased transparency regarding FBI intelligence reports that are widely shared to local police.

We are working to challenge the FBI director’s characterization of Chinese scholars and scientists as a national security threat based only on their country of origin. DRAD wrote a coalition letter to Congress, and we are working with Chinese American civil rights groups, particularly regarding the case of Sherry Chen.

DRAD is a national leader in the movement against this insidious program, and we have been since the Obama Administration launched it several years ago. We were one of the first civil liberties groups to recognize how CVE targets political expression and racial/religious identity.

Our year-long campaign in Montgomery County, Maryland (which included public education, mobilizing community members, pressuring elected officials, bird-dogging candidates) led to a significant victory when the County Executive declared an end to CVE in the county.

In 2018, we hosted or co-hosted public forums in Washington, DC, Boston and Indianapolis to build similar campaigns.

And, we helped organize a congressional lobby day for advocates from California, Minnesota, Massachusetts, Illinois and Michigan.

DRAD continued to work with grassroots groups to restrict surveillance technology, or at least require transparency from local police on what surveillance technologies they use. Nationally, we were at the vanguard of surveillance reform,  demanding sweeping restrictions on the surveillance state and for the sunset of Section 702 of the FISA Amendments Act, which authorizes mass electronic surveillance. Along with allies, we collected and delivered over 100,000 signatures to Congress, participated in congressional visits, and social media campaigns, although in the end, we were unable to kill Section 702.

We’re already laying the groundwork for an aggressive campaign in 2019 to let the sunset on Section 215 of the PATRIOT Act (the part where the NSA gets to do mass surveillance on our phone calls).

Were taking on the platforms that have become today’s public square. That means holding Facebook and others accountable to their users, and demanding due process for users whose posts, events, or even accounts are taken down. We are also investigating the relationship between Facebook and the FBI’s Foreign Influence Task Force. The last thing we need is the FBI telling Facebook what posts to take down… and we don’t need Facebook sharing user info with the FBI!

DRAD is leading the charge against the Espionage Act prosecutions of whistleblowers. We stepped up to defend Reality Winner and Terry Albury. When Reality was sentenced to an unprecedented 5 years and 3 months in prison, we led a pardon campaign, delivering thousands of signatures to Trump. DRAD also organized a letter to the DOJ after FBI whistleblower Terry Albury pleaded guilty, signed by 42 prominent whistleblowers and organizations calling for an end to Espionage Act prosecutions.

DRAD has continued to cover Guantanamo and the many violations that occur there, often outside of the spotlight. Those issues include the Pentagon’s decision to seize artwork created by detainees, continued forced feeding, and blatant denial of due process.  We also helped to organize the annual protest against Guantanamo at the White House and in Los Angeles on January 11

DRAD was a key member of a coalition opposing the nomination of Gina Haspel as CIA Director. In addition to mobilizing our members, participating in about a dozen visits to Intelligence Committee staff, we helped to organize a protest outside the Senate Office Building where her nomination hearing was held.