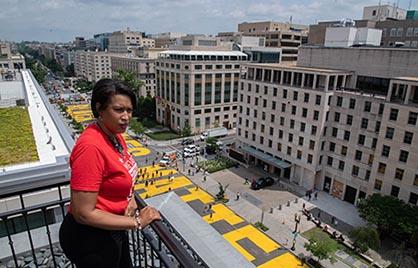 DC’s Mayor Muriel Bowser was angry when federal agents aggressively fired chemical agents at peaceful protesters outside the White House on June 1, to clear the way for President Trump to wave a bible in front of a church. On June 5, she renamed the portion of 16th St leading to the White House Black Lives Matter Street, and commissioned a giant street mural with the words “Black Lives Matter” spelled out in bold yellow letters 35 feet tall.

When it came to Mayor Bower’s own police, Mayor Bowser turned a blind eye to their abuses while calling for even greater funding for them. She may have renamed a street for Black Lives Matter in order to send a message to Trump, but she ignored the demands of Black Lives Matter activists in her own city.

Now she is demanding that more protesters be prosecuted, even when they were arrested without probable cause.

On August 31, Mayor Bowser wrote a letter (page 1 and page 2) to the Acting U.S. Attorney in DC complaining that he had not been aggressive enough in prosecuting protesters. (Note: because of DC’s status as a colony, prosecutions in the city are handled by the Justice Department’s U.S. Attorney’s Office rather than a locally elected District Attorney).

“I was dismayed to find that your office declined to prosecute 41 of the 42 rioting arrests made on August 13 and 14.”

The rioting arrests she’s talking about refer to the defective DC Riot Act, which DC’s Criminal Code Review Commission has deemed in need of significant revision. (Another note: because of DC’s status as a colony, the US Congress actually imposed this law on the city decades ago). This is the same law that led to the arrest of 200 protesters during the Trump Inauguration protests in 2017, leading to exactly zero convictions.

The US Attorney’s Office wrote back to the Mayor on September 1 (page 1 and page 2), pointing out that the arrests had been made without probable cause, and therefore could not be prosecuted.

Unfortunately, that wasn’t the end of the kerfuffle. DC Police Chief Peter Newsham lobbied the US Attorney to find some way to press charges against more protesters. As a result, three more people have been charged.

Disturbed that Mayor Bowser was more intent on demonizing protesters than addressing the abuses against protesters by her own police force, DRAD joined with Law 4 Black Lives DC to remind her that she has a responsibility to protect the people of the District. We are joined on the letter by BYP100 DC,
Collective Action for Safe Spaces, DC Abortion Fund, Demand Progress, Fight for the Future, Justice For Muslims Collective, National Asian Pacific American Women’s Forum (NAPAWF) DC, National Lawyers Guild, DC Chapter, New Synagogue Project, No Justice No Pride, Peacebuilding Connections, and RootsAction.org

Read the full letter here and below:

The above letter follows up and expands upon an earlier letter DRAD sent to the Mayor on September 4. You can read that letter here.