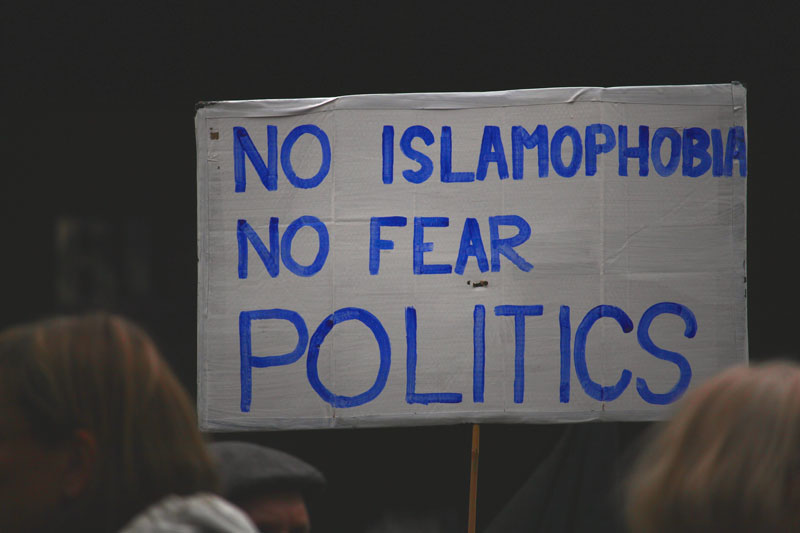 No Islamophobia, No Fear Politics Photo by JMacPherson /CC BY 2.0

The metamorphosis of countering violent extremism (CVE) from a rhetorical framework to a principal strategy of US domestic counterterrorism regime hasn’t been without its share of troubles.

Under the SPOT (or Screening of Passengers by Observation Techniques) program, for instance, the Transportation Security Administration (TSA) directs thousands of agents to identify possible terrorists at airport security checkpoints. “Behavior detection” officers size up queued passengers and assign points to persons exhibiting suspicious behaviors listed on their 92-point checklist.

According to internal TSA documents released by The Intercept, excessive yawning could earn a point, as would gazing down or having sweaty palms. And if a passenger recently shaved their beard or whistled as they approach the security scanner, they should expect points for that as well.  Once an arbitrary number of points are earned, a passenger is pulled out of line for further questioning, triggering another checklist (with corresponding points) based on what is packed in their bags (Friendly suggestion: leave your almanacs at home).

SPOT is supposedly keeping travelers safe in over 160 airports and has cost nearly $1billion in federal grants, but not a single terror-related arrest is attributed to the program. Adding to its woes, a 2013 Government Accountability Office (GAO) report found there was no evidence to support the use of pseudo-scientific “behavior detection” techniques to identify potential aviation threats. The report called for curbing the program and said it contributes to the persistent allegations of racial and ethnic profiling at US airports.*

One bright spot for SPOT: It is among the few CVE efforts that do not explicitly target a specific community, race, or ideology. This is in line with President Obama’s original national strategy to prevent domestic violent extremism that declares “no single issue or grievance” pushes individuals toward committing violence, and notes that “the path to violent extremism can vary considerably.” This messaging is echoed by the Department of Homeland Security’s website on preventing terrorism: “The threat posed by violent extremism is neither constrained by international borders nor limited to any single ideology.”

This is in stark contrast to the reality of CVE programs. Federal and state law enforcement CVE initiatives almost exclusively involve engaging, reprogramming, or spying on, depending on your perspective, members of the American-Muslim community. CVE in America, according to Professor Amna Akbar at Ohio State University, “mark[s] religious and political activities as the indicators of radicalization, [and] the discourse links religious and political practices in Muslim communities with the likelihood of terrorism.”

This is true whether looking at the White House’s major CVE pilot program underway in Boston, Los Angeles, and in the Twin Cities aimed at each city’s sizeable Muslim-American populations, or the FBI’s “Don’t Be a Puppet” campaign, which disproportionately focuses on Islamic extremism and relies on stereotypical representations of Muslims.

And while criticism of CVE actions typically zeros in on the suspicion-less surveillance programs that have compromised countless Muslim communities and chilled free speech rights, much less attention has been directed toward the way CVE programs are often structured to cultivate teachers, healthcare providers, and social workers as informants for law enforcement.

Sadly, this is increasingly becoming a reality for many American-Muslims. From healthcare workers spying on their ‎patients, youth groups whose access to public resources is made conditional on sharing data ‎with law enforcement, to Islamic organizations asked to divulge ‎membership lists to the FBI, Muslims are under constant pressure to comply.

In fact, the latest initiatives outlined by the President at the CVE summit last year boast of bringing law enforcement, educators, public health professionals, and religious and community leaders together in innovative (and disturbing) ways to share information. The overarching goal, according to DOJ spokesman Marc Raimondi, is “to identify and confront radicalization and deter it at the earliest possible point.” (my emphasis)

And the CVE programs out there back this up.

In Minnesota, Minneapolis Public School officials partnered with the State Attorney’s office to launch a CVE program to monitor at-risk kids during lunch and after school programs. It supposedly worked by watching for children exhibiting “identify issues and disaffection.” This program was blasted by the Brennan Center for Justice which said it relied on the faulty premise that “these issues lead inexorably to terrorism and that lunch room monitors will be able to spot behaviors indicative of alienation.”

In 2012 the FBI recognized Ka Joog, a group of Somali-Americans who provide free after-school and mentorship programs. Suspicions that the group tracked the behavior and activities of students and reported it to law enforcement upset many in the community, forcing the US attorney’s office to sign a memorandum of understanding that it will not use these programs to collect intelligence. “People have a reason to be scared,” says Abdisalam Adam, a Somali-American familiar with the group’s activities. “When you think about Ka Joog, it’s because of the work they did with radicalization and the FBI. It’s not an after-school program.”

Some CVE strategies seize on the vulnerability of working class and immigrant Muslim-Americans who often lack access to adequate education and legal services. For instance, 82 percent of the estimated 80,000 Somalis in Minneapolis live near or below the poverty line, says Professor Khaled A. Beydoun at Barry University. This exposes “this community to the intersecting trappings of racialized poverty and anti-terror policing,” he warns.

CVE programs underway in Boston seek to address radicalization in concert with domestic violence, drug abuse, and gangs through unconventional means. One example involves an online cartoon series similar to one in the UK called, “Abdullah X,” featuring a bearded protagonist challenging terrorist narratives and raising issues of identity and faith.

“Counter-terrorism work of the last several years has wrongfully stigmatized our communities, through the use of surveillance, informants, and other targeting of Muslim communities not connected to any suspected wrongdoing,” the Somali-American Task Force said in response to CVE activities in their state; sentiments that are shared by Muslims across the country.

Responding to the complaints and mounting evidence that these programs are unjustified and unproven, the ACLU filed a Freedom of Information Act lawsuit seeking transparency on these programs. “The apparent focus on young people as a target of government counter-extremism initiatives should be troubling to everyone,” says Hina Shamsi, director of the ACLU’s National Security Project. “It would be very unfortunate to see teachers or social workers potentially reporting kids to law enforcement as possible extremists, particularly when many of the designated ‘warning signs’ for extremism correspond with ordinary behaviors often exhibited by adolescents and teenagers.”

In a briefing paper released with its lawsuit, the ACLU said that CVE programs often target “people for monitoring based on their beliefs or ideologies,” thus potentially criminalizing speech protected under the First Amendment. The Intercept also reported that the ACLU’s briefing paper highlights past abuses of CVE programs, “including instances in which young people who refused to take part were characterized as radicals and where community leaders were told they would have to identity and discuss cases of specific youths with law enforcement.”

These types of activities, which interfere with how people worship, socialize and receive public assistance, contribute to an already inflammatory environment where American-Muslims feel targeted, not protected, by law enforcement. It also damages the most reliable way of obtaining accurate terrorism intelligence from these communities, destroying the trust between community members and law enforcement.

To effectively confront terrorism, the US government needs to forge bonds with the very ‎communities they consistently cast blanket suspicion over. It needs to reject approaches that rely on debunked theories, force neighbors to spy on their neighbors, or interfere with the ability of Americans to exercise their constitutional rights. Law enforcement’s focus should be on policing crimes, not shaping beliefs.

*While TSA does not keep a record of the racial background of people they detain under the SPOT program, agents working at Logan International Airport in Boston told the New York Times that about 80% of people stopped were non-white and that they felt pressure to flag passengers. “The stops were seen as a way of padding the program’s numbers and demonstrating to Washington policy makers that the behavior program was producing results,” according to the Times article.