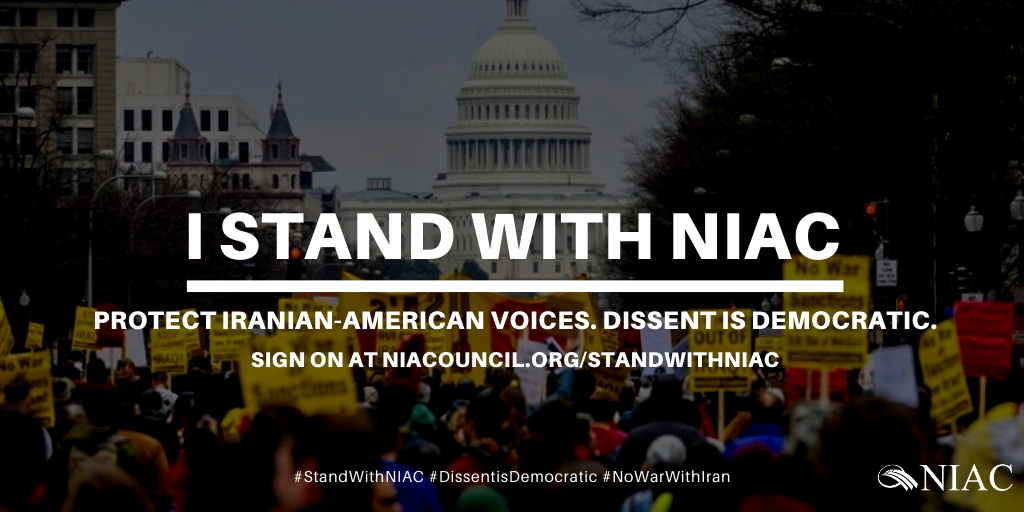 On January 13, Senators Tom Cotton (R-AR), Ted Cruz (R-TX) and Mike Braun (R-IN) sent a letter to the Department of Justice, asking DOJ to open an investigation into “the activities of the National Iranian American Council (NIAC) and its sister organization NIAC Action for potential violations of the Foreign Agents Registration Act (FARA).” The three Senators have no reason to suspect NICA and NIAC Action of any violation of the law, instead it appears that the Senators are counting on the DOJ to neutralize two groups that are advocating against policies Cotton, Cruz and Braun support.

In a statement responding to the letter, NIAC said:

“The slanderous accusations from Senators Tom Cotton, Ted Cruz, and Mike Braun have zero merit. It is yet another sign that warhawks are seeking to intimidate pro-peace voices, starting with Iranian Americans, from halting the push toward war, which Cotton and Cruz have long championed. We have already seen the coordinated efforts, such as the U.S. government funded “IranDisinfo” project that slandered groups like Human Rights Watch, as well as Iranian-American journalists, analysts, academics, and civil society organizations like ours who dared speak out against the Trump Administration’s Iran policies. This is the latest attempt to silence NIAC and other pro-peace Iranian Americans from having a voice in this debate that impacts us and our community. We will not let that happen.”

Defending Rights & Dissent agrees with that analysis, and joined with many advocacy groups to stand up for NIAC and NIAC Action and to condemn the Senators’ blatant attempt to use the DOJ to silence dissent.

The National Iranian American Council (NIAC), and its sister organization NIAC Action, are American civil-society organizations working on behalf of members of the Iranian-American community and the broader American public. At a time when our nation is bitterly divided, NIAC is an important voice in our public debate on issues of enormous consequence for all Americans — and particularly for Americans of Iranian heritage — including heightened tensions in the Middle East and the risk of war, policies like the Muslim travel ban and extreme vetting, the rise in domestic hate crimes, and the protection of civil liberties.

We are deeply disturbed by the letter from Senators Tom Cotton, Ted Cruz and Mike Braun insinuating that this Iranian-American organization has dual loyalties, is somehow less American than other organizations in this space, and should be subject to a Justice Department investigation. While these Senators may have profound differences in opinion with NIAC, particularly on the question of escalation and potential war with Iran, the Justice Department is not the forum to resolve those debates. These tactics have no place in our political process or our national discourse, and risk turning our Justice Department into a political tool to intimidate and silence voices that disagree with whichever administration is in power. We are concerned that everyone involved in contentious policy debates, regardless of political persuasion, will be at risk.

We are proud to stand with NIAC and commend its essential contribution to the public debate.