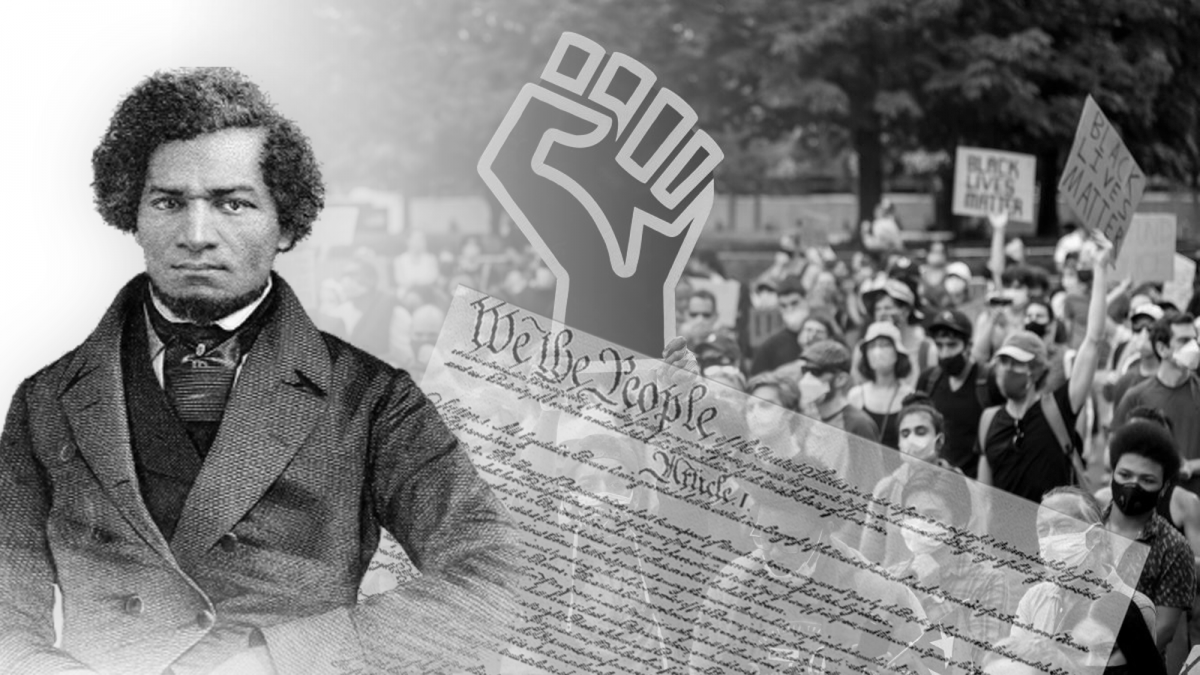 Almost 170 years ago, Fredrick Douglass created a stir in the Abolitionist movement via an essay in the May 23, 1851 edition of William Lloyd Garrison’s The Liberator, declaring that the Constitution “might be made consistent in its details with the noble purposes avowed in its preamble; and that hereafter we should insist upon the application of such rules to that instrument, and demand that it be wielded in behalf of emancipation.” Douglass’ stand cost him friendships, and the endorsement of his own newspaper, the North Star, by abolitionists at large.

Douglass stood his ground, retaining the hope that the American Experiment could still be perfected, that people of color and women would ultimately achieve equality—politically, economically, and socially—with the white Protestant males who had created and controlled the American government since its founding. In the end, the political chaos and national moral schizophrenia caused by the abomination of slavery was confronted and physically resolved on battlefields ranging from Manassas, Virginia to Vicksburg, Mississippi and almost too many points in between to count.

In the century between the end of the Civil War and the passage of the Civil Rights Act, many who followed in Douglass’ footsteps in what would become known as the civil rights movement still clung to the hope that America—and especially white Americans—could change, that the racism permeating American society and government could be excised. The late Rev. Martin Luther King, Jr. and his followers and chief associates, including the late Rep. John Lewis (D-GA), largely held onto that belief, even in the face of savage police brutality and a Federal Bureau of Investigation (FBI) program of surveillance and political subversion known as COINTELPRO sought to thwart their aspirations. A recent FBI Freedom of Information Act (FOIA) release to the Cato Institute provides a snapshot of that struggle.

In late December 1969, two FBI Chicago field office informants—only identified as “CG T-2” and “CG T-7”—gave their FBI handlers a report on informal field hearings held by members of what the informants described as “the Committee of Black Congressmen” which was in fact the Democracy Select Committee, founded by then-Rep. Charles Diggs (D-MI) and the forerunner of the modern-day Congressional Black Caucus. Other members included Representatives John Conyers (D-MI), Adam Clayton Powell, Jr. (D-NY), William Clay (D-MO), and Louis Stokes (D-OH), among others.

Just over two weeks after the Chicago Police Department’s murder of Black Panther activists Fred Hampton and Mark Clark, Diggs and several of his DSC colleagues gathered at Chicago’s Colonial House Restaurant to hear from community leaders, local officials and the public about the Hampton/Clark murders and reports of widespread police violence and brutality. The FBI’s informants reported that James Murphy, First Assistant to the Cook County States’ Attorney’s office read a statement claiming it was “improper” for their office to participate in the hearing “since the panel had not been authorized by the Congress to hold the hearing.” Murphy was clearly weak in his understanding of both the Constitution and the rules of the House at the time. Diggs and his colleagues had all the Article I authority they needed to hold the hearing and take testimony.

There are many striking things about this 13-page FBI report, but perhaps the most striking is the continuity it reveals between the atmosphere in the country in 1969 and now: police brutality and the unjustified killings of young Black men; the collusion between federal, state and local authorities to suppress Black political activism; and the consistent list of demands for justice in multiple areas of American life as they affected the Black community.

The FBI report contains the Black Panther’s 10-point reform program, as read into the record by then-Illinois Black Panther Minister of Defense (and future Congressman) Bobby Rush, which included “…freedom…We want power to determine the destiny of our black community” and “…an immediate end to police brutality and murder of black people.” Over 50 years later, the simple demand to just not be arbitrarily killed by police is a central plank of the Movement for Black Lives.

Over 230 years after the promulgation of the Constitution, America is once again a nation engulfed in political chaos and moral schizophrenia over state-sponsored murders and political repression of Black, Arab, Muslim, Latino and Asian Americans, among others. That violence, racism and repression is fueled by the current occupant of the Oval Office and those carrying out his “law and order” program, which targets virtually any one or any group that challenges Trump’s twisted vision of what the United States should look like and stand for. But like Fredrick Douglass, I retain the hope—slender though it be—that we can still come through this crisis, that a better, more just American experience is possible for all our citizens.

For that to happen, those of us who have rarely if ever suffered violence or loss at the hands of the state must acknowledge the pain of those who have suffered and lost. We must help stop racially-motivated, state-sponsored violence, help ensure the perpetrators of it are punished, and support policies and programs that de-securitize the government’s approach to our domestic challenges. A better America is possible, but only if our professed empathy manifests itself through concrete action.