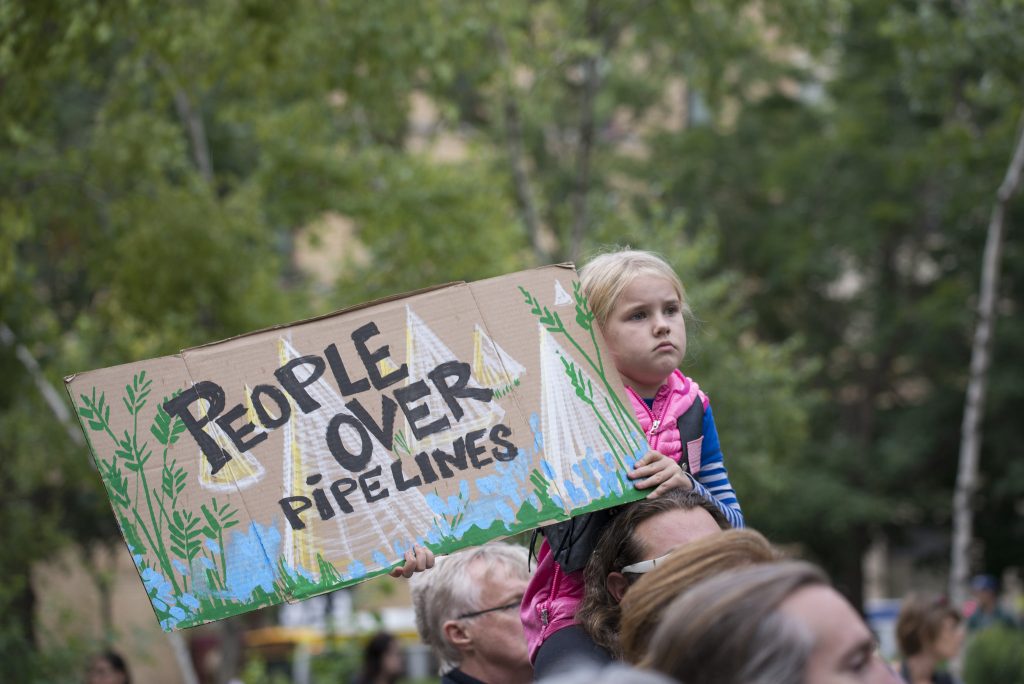 Over 45 leaders from international, national, and Oregon-based organizations sent a letter to Governor Kate Brown calling on her to protect the civil liberties of her constituents by withdrawing all Oregon resources and participation in the current surveillance of Jordan Cove LNG opposition. Read the letter online here.

Their request is in response to recent reporting from The Guardian uncovering the potentially illegal surveillance of communities opposing the Jordan Cove LNG export terminal and fracked gas pipeline.

We are asking that you stand up for free speech, existing jobs in fishing and crabbing, landowner and Tribal rights, clean water, fire prevention, public safety, and climate action and that you put a stop to this kind of surveillance on your watch.

The article shows that the so-called South Western Oregon Joint Task Force (SWOJTF) includes the Oregon State Police (OSP), FBI, the Bureau of Land Management, the Department of Justice (DoJ), the U.S. Forest Service,  various Oregon municipal police and sheriff’s departments including Coos County sheriffs and a Portland Police Bureau officer, and a partisan national political consultant, and that these agencies are coordinating with Pembina, the Canadian company proposing the Jordan Cove project.

Through this task force, the State of Oregon and other agencies have been, at a minimum, monitoring social media posts and public emails by concerned community members and organizations. As the ACLU of Oregon has pointed out, monitoring and compiling information about Oregonians’ political or social views, activities, or associations violates Oregon law.

We ask that you protect the civil liberties of your constituents by withdrawing all Oregon resources and participation in the SWOJTF immediately.

We also ask that you publicly call for disbanding the SWOJTF and end the involvement of state employees in surveilling Oregonians who have expressed their concerns about the threat of drinking water degradation, loss of existing fishery and tourism jobs, property seizure via eminent domain, pipeline accidents and explosions, major dredging in Coos Bay, and the huge greenhouse gas footprint of Pembina’s Jordan Cove LNG project.


Signatories of the letter include Honor the Earth Executive Director Winona LaDuke, founder of 350.org Bill McKibben, the Oregon League of Conservation Voters, the Oregon Chapter of the Sierra Club, Oregon Physicians for Social Responsibility, the Coos Bay Chapter of the Surfriders Foundation, and more than 40 other organizations.

“Impacted landowners, tribal members, small business owners, youth, and more have been working to protect our homes, water, and climate from the Jordan Cove LNG export project  for over 15 years. It is absurd that public agencies in Oregon are using potentially illegal surveillance to try to stifle the voices of the southern Oregonians who would be impacted by this project,” said Hannah Sohl, Executive Director of Rogue Climate. “This letter should send a clear message to Governor Kate Brown that Oregon public agencies should be working to stop Jordan Cove LNG, not working hand in hand with Pembina to steamroll southern Oregonians.

The Jordan Cove LNG export project consists of a proposed 36-inch diameter, 229-mile fracked gas pipeline through Southern Oregon and an export terminal in Coos Bay where the gas would be liquefied and put on tankers for export. The pipeline would harm hundreds of waterways, including the Klamath, Rogue, Umpqua, Coquille, and Coos Rivers and the public drinking water of over 150,000 people.

The pipeline also threatens hundreds of landowners with eminent domain, the traditional territories and cultural resources of local Tribes, and would increase wildfire risk in some of Oregon’s most wildfire prone forests.

Dredging required for the export terminal would put existing jobs in commercial fishing, crabbing, and tourism at risk. The terminal alone would also become the largest source of climate pollution in Oregon.