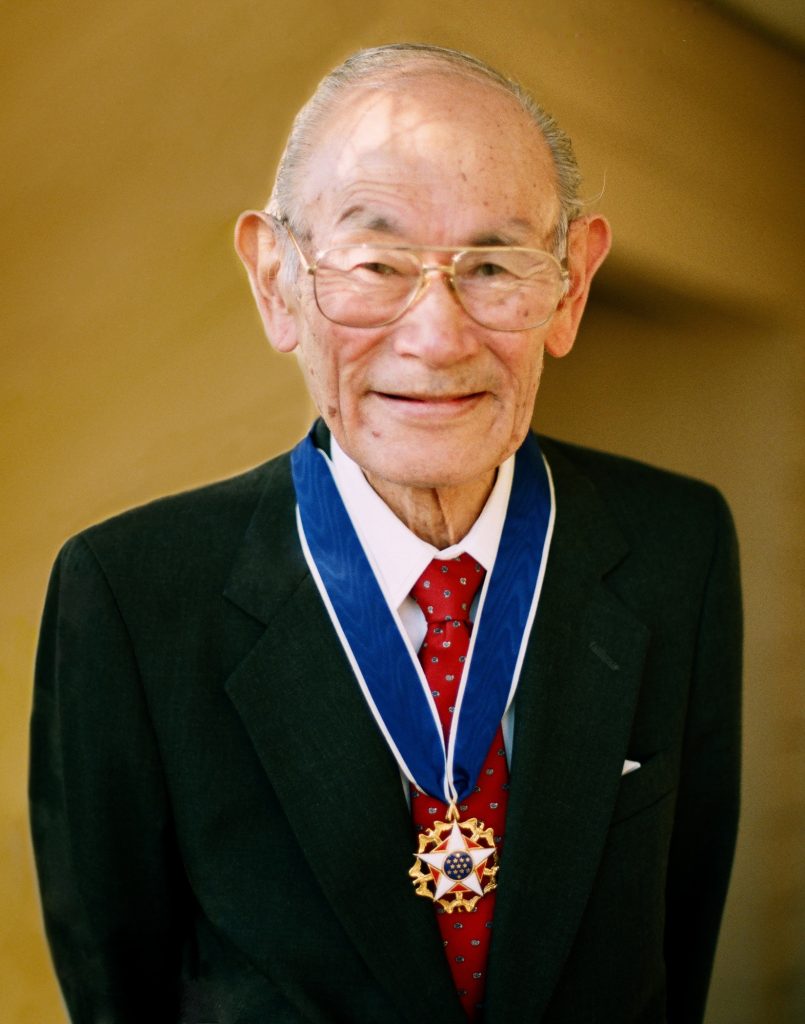 Hirono’s resolution (S. Res.387) is timely, in the face of Trump Administration attacks on immigrants and Muslims, and his recent executive order keeping Guantanamo open. Defending Rights & Dissent, along with 50 other civil society organizations (listed below) endorse the resolution.

S.Res.387 – A resolution recognizing January 30, 2018, as “Fred Korematsu Day of Civil Liberties and the Constitution”.

Recognizing January 30, 2018, as “Fred Korematsu Day of Civil Liberties and the Constitution”.

Whereas, on January 30, 1919, Fred Toyosaburo Korematsu was born in Oakland, California, to Japanese immigrants;

Whereas Fred Korematsu graduated from Oakland High School in 1937 and attempted to enlist in the military twice but was unable to do so because his selective service classification was changed to enemy alien, even though Fred Korematsu was a United States citizen;

Whereas Fred Korematsu trained as a welder and worked as a foreman at the docks in Oakland until the date on which he and all Japanese Americans were fired;

Whereas, on December 7, 1941, Japan attacked the military base in Pearl Harbor, Hawaii, causing the United States to declare war against Japan;

Whereas, on February 19, 1942, President Franklin D. Roosevelt signed Executive Order 9066 (7 Fed. Reg. 1407 (February 25, 1942)), which authorized the Secretary of War to prescribe military areas–
(1) from which any or all people could be excluded; and
(2) with respect to which, the right of any person to enter, remain in, or leave would be subject to any restriction the Military Commander imposed in his discretion;

Whereas, on May 3, 1942, the Lieutenant General of the Western Command of the Army issued Civilian Exclusion Order 34 (May 3, 1942) (referred to in this preamble as the “Civilian Exclusion Order”) directing that all people of Japanese ancestry be removed from designated areas of the West Coast after May 9, 1942, because people of Japanese ancestry in the designated areas were considered to pose a threat to national security;

Whereas Fred Korematsu refused to comply with the Civilian Exclusion Order and was arrested on May 30, 1942;

Whereas, after his arrest, Fred Korematsu–
(1) was held in squalor for 2\1/2\ months in the Presidio stockade in San Francisco, California;
(2) was convicted on September 8, 1942, of violating the Civilian Exclusion Order and sentenced to 5 years of probation; and
(3) was detained at Tanforan Assembly Center, a former horse racetrack used as a holding facility for Japanese Americans before he was exiled with his family to the Topaz internment camp in the State of Utah;

Whereas more than 120,000 Japanese Americans were similarly detained, with no charges brought and without due process, in 10 permanent War Relocation Authority camps located in isolated desert areas of the States of Arizona, Arkansas, California, Colorado, Idaho, Utah, and Wyoming;

Whereas Fred Korematsu unsuccessfully challenged the Civilian Exclusion Order as it applied to him and appealed the decision of the United States District Court to the United States Court of Appeals for the Ninth Circuit, which sustained his conviction;

Whereas Fred Korematsu was subsequently confined with his family in the internment camp in Topaz, Utah, for 2 years, and during that time, Fred Korematsu appealed his conviction to the Supreme Court of the United States;

Whereas, in his dissenting opinion in Korematsu v. United States, 323 U.S. 214 (1944), Justice Frank Murphy called the Civilian Exclusion Order the “legalization of racism”;

Whereas Fred Korematsu continued to maintain his innocence for decades following World War II, and his conviction hampered his ability to gain employment;

Whereas, in 1982, legal historian Peter Irons and researcher Aiko Yoshinaga- Herzig gained access to Government documents under section 552 of title 5, United States Code (commonly known as the “Freedom of Information Act”), that indicate that while the case of Fred Korematsu was before the Supreme Court of the United States, the Federal Government misled the Supreme Court of the United States and suppressed findings that Japanese Americans on the West Coast were not security threats;

Whereas, in light of the newly discovered information, Fred Korematsu filed a writ of error coram nobis with the United States District Court for the Northern District of California, and on November 10, 1983, United States District Judge Marilyn Hall Patel issued her decision in Korematsu v. United States, 584 F. Supp. 1406 (N.D. Cal. 1984), that–
(1) overturned the conviction of Fred Korematsu;
(2) concluded that, at the time that senior Government officials presented their case before the Supreme Court of the United States in 1944, the senior Government officials knew there was no factual basis for the claim of military necessity for the Civil Exclusion Order; and
(3) stated that although the decision of the Supreme Court of the United States in Korematsu v. United States, 323 U.S. 214 (1944), remains on the pages of United States legal and political history, “[a]s historical precedent it stands as a constant caution that in times of war or declared military necessity our institutions must be vigilant in protecting constitutional guarantees”;

Whereas the Commission on Wartime Relocation and Internment of Civilians, authorized by Congress in 1980 to review the facts and circumstances surrounding the relocation and internment of Japanese Americans under Executive Order 9066 (7 Fed. Reg. 1407 (February 25, 1942)), concluded that–
(1) the decision of the Supreme Court of the United States in Korematsu v. United States, 323 U.S. 214 (1944), is overruled by the court of history;
(2) a grave personal injustice was done to the United States citizens and resident aliens of Japanese ancestry who, without individual review or any probative evidence against them, were excluded, removed, and detained by the United States during World War II; and
(3) the exclusion, removal, and detention of United States citizens and resident aliens of Japanese ancestry was motivated largely by racial prejudice, wartime hysteria, and a failure of political leadership;

Whereas the overturning of the conviction of Fred Korematsu and the findings of the Commission on Wartime Relocation and Internment of Civilians influenced the decision by Congress to pass the Civil Liberties Act of 1988 (50 U.S.C. 4211 et seq.) to request a Presidential apology and the symbolic payment of compensation to people of Japanese ancestry who lost liberty or property due to discriminatory actions of the Federal Government;

Whereas, on January 15, 1998, President Clinton awarded the Medal of Freedom, the highest civilian award of the United States, to Fred Korematsu, stating, “[i]n the long history of our country’s constant search for justice, some names of ordinary citizens stand for millions of souls: Plessy, Brown, Parks. To that distinguished list, today we add the name of Fred Korematsu.”;

Whereas, on January 27, 2017, President Trump issued–
(1) an Executive order that suspends for 90 days the entry into the United States of immigrants and nonimmigrants who are nationals of 7 Muslim-majority countries, prohibiting the issuance of any visa to relatives, family members, and tourists from the 7 designated countries based solely on the nationality of the individual;
(2) an Executive order indefinitely suspending the admission as refugees of Syrian nationals, even though, as of January 2017, there were more than 4,000,000 registered Syrian refugees who have fled the destructive civil war in Syria and as of January 2018, that number has increased to more than 5,000,000 people;
(3) an Executive order slashing refugee admissions numbers for fiscal year 2017 from 110,000 to 50,000, even as other countries move to take in refugees; and
(4) an Executive order directing the United States Refugee Assistance Program to prioritize refugee claims based on religious persecution in which the religion of the refugee is a minority religion in the country of nationality of the refugee, a priority that singles out for exclusion members of the Islamic faith;

Whereas the January 2017 Executive Order was blocked in part by federal courts based on various grounds, including the strong likelihood of success of establishing a violation of constitutional rights;

Whereas on January 18, 2018, a report by the Office of Inspector General within the U.S. Department of Homeland Security found that– the January 2017 Executive Order was crafted independent of input from the department charged with its enforcement and the Department of Homeland Security “was largely caught by surprise” by the signing of the Executive Order; and
the U.S. Customs and Border Protection appeared to violate two court orders restricting implementation of the January 2017 Executive Order;

Whereas Fred Korematsu remained a tireless advocate for civil liberties and justice throughout his life by–
(1) speaking out against racial discrimination and violence targeting Arab, Muslim, South Asian, and Sikh Americans in the wake of the September 11, 2001, tragedy; and
(2) cautioning the Federal Government against repeating mistakes of the past that singled out individuals for heightened scrutiny on the basis of race, ethnicity, nationality, or religion;

Whereas the recent actions of President Trump run directly counter to the history and legacy of justice exemplified by Fred Korematsu: Now, therefore, be it

Resolved, That the Senate—

(1) honors Fred Toyosaburo Korematsu for his–
(A) loyalty and patriotism to the United States;
(B) work to advocate for the civil rights and civil
liberties of all people of the United States; and
(C) dedication to justice and equality;

(2) recognizes January 30, 2018, as “Fred Korematsu Day of Civil Liberties and the Constitution”; and

(3) denounces any governmental effort to discriminate against any individual based on the national origin or religion of the individual.