How Many Americans Are Being Swept Up in FISA Dragnet? 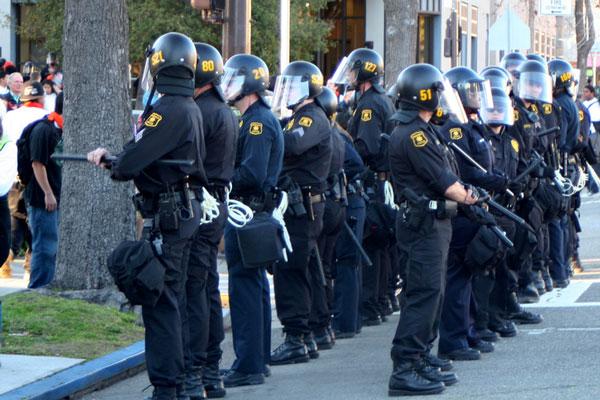 On December 6, 2014 frustrated with the failure of grand juries to indict the police officers that killed Michael Brown and Eric Garner Black Lives Matter protests took place across the United States. Many of these protests appeared almost spontaneous as thousands of people took to the streets (and sometimes took the streets) to show their opposition to racially targeted police violence and the system, which reproduces it.

Berkeley, long stereotyped as a sort of leftwing utopia, was no different than many other parts of the country in this respect. What did make Berkeley stand out was the police response to protests—police fired an estimated fifty cans of tear gas at demonstrators, nearly depleting their supplies. They also fired rubber bullet-type projectiles into the crowd and struck individuals with batons.

Who Polices the Police?

That a protest against police violence was met with violence itself led to calls for a investigation. Six months later the police issued their own report—titled “Response to Civil Unrest.” The title alone reveals a problematic outlook on the part of Berkeley police—as instead of focusing on the police’s handling of the largely peaceful protests, it exclusively mentions “civil unrest.” Its executive summary explains how the police have two responses to crowds “crowd management” and “crowd control.” From the very start of the announced demonstration the police approached the protest as a crowd control situation. This is spite of the fact that police logs show earlier on the protest was entirely peaceful. The police based their strategy on an expectation that the protests would develop into riots and vandalism, evidenced by the BPD’s Incident Action/Briefing Notes which directed the police to: “Get’um running!  Stretch the crowd out so they are not a mass, but individuals.”

Police accountability activists were not pleased with the report. In an editorial, the Daily Californian wrote that the report, “cherry-picked facts, lacked accountability and failed to include many meaningful recommendations.” Members of the Berkeley Police Review Commission also expressed concern.

The Berkeley Police Review Commission also took umbrage with how the police approached the entire demonstration. While the city claims to consider demonstrations for social and political concern to be a positive thing, the police approached the crowd from the get go with crowd control techniques. Instead of focusing on the largely peaceful nature of the protests, the police came presuming the protest would mirror recent so-called “Fuck the Police” actions which the Berkeley police claimed in other cities had resulted in “mob violence, damage to businesses, looting, vandalism to vehicles, and attacks on officers.” Instead of taking this confrontational approach, the Berkeley Police Review Commission recommends that the Berkeley police approach protests as crowd management, not crowd control, situations and practice de-escalation tactics.

Finally, the Berkeley Police Commission has expressed concern with excessive use of less than lethal force—especially tear gas and batons.

One of the current members of the Berkeley Police Review Commission is George Lippman, a previous recipient of the BORDC/DDF Patriot Award.

In addition to serving on the Berkeley Police Review Commission, George is also chair of the Berkeley Peace and Justice Commission. In 2011 the Peace and Justice Commission was considering an immigrants’ rights bill for the City Council when Lippman and other grassroots activists spoke with former BORDC Executive Director and current board member Shahid Buttar. Shahid introduced the Berkeley activists to the Local Civil Rights Restoration Act (LCRRA). The LCRRA is a comprehensive bill meant to rectify a host of civil liberties violations that touches on issues ranging from immigrants’ rights and racial profiling to police infiltration of First Amendment protected activity. By being a comprehensive bill the LCRRA aims to enable activists to achieve victories by bringing together a broad coalition.

Ultimately, activists in Berkeley did not seek the passage of a local ordinance, instead pursuing other remedies specific to Berkeley. Nonetheless the LCRRA made an impression on Lippman and other activists who adopted the broad coalition strategy for themselves. This is exactly what BORDC seeks to do—not to co-opt local struggles or impose orders from above, but to provide grassroots activists with the tools and support to win. While the LCCRA is a comprehensive bill, it’s malleable enough to be adapted to local conditions and serve the needs of local activists.

Lippman views what he is doing currently as “activism within the government,” not an abdication of his former role as an activist. As Lippman sees it, it takes activism both on the “inside” and on the “outside” to achieve meaningful social change. A great example of this “inside/outside” approach is that recently Berkeley Copwatch obtained evidence of racial profiling, spurring the Berkeley Police Review Commission to take on the matter. Lippman does feel like his role on the Berkeley Police Review Commission is different than traditional government service in some senses—he feels a responsibility to empower the community as a whole and facilitate its participation in making policy.

Lippman feels dedicated to his role on the Berkeley Police Review Commission.  He explained that the community fought hard to create this institution forty years ago. It is important to make use of it so their struggle was not in vain. A proactive Police Review Commission plays an important role in stepping up whenever the police go too far, whether in reviewing the police response to Black Lives Matter protests or stopping runaway racial profiling.