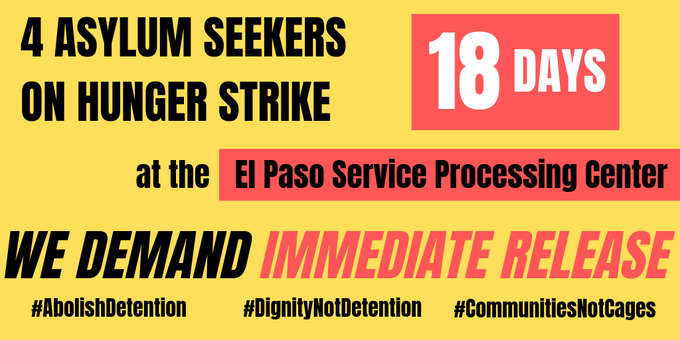 UPDATE 7.31.19
The men continue their hunger strike, and ICE continues its retaliation. But advocates continue to raise awareness about the lack of due process and horrific conditions in the different facilities where these asylum seekers are being detained. On July 27, Senator Ron Wyden visited the Otero ICE facility. This is what he had to say:

ICE’s El Paso Sevice Processing Center (EPSPS) is infamous for mistreatment of detainees. Earlier this year, detainees went on a prolonged hunger strike to protest their unjust detention and inhumane treatment. Those asylum seekers were force fed, which is a form of torture, and eventually returned to the country (India) from which they were seeking asylum.

Yesterday afternoon, advocates learned that the asylum seeking men on hunger strike in the El Paso Service Processing Center (EPSPC) were issued an ultimatum to drink Boost, or they would be given involuntarily hydration (IV’s). The men refused to drink the Boost, and were shown court orders for the IV’s. In the words of one of the men on hunger strike:

“today doctor put I V forcely we refused for this but they do it. they shows the court order for I V.”

These men are on hunger strike for their freedom after suffering prolonged detention, lack of due process, and discrimination. Yet ICE continues to escalate their retaliation against these men by subjecting them to involuntary procedures they refuse, with the aim of keeping these men detained without cause. Rather than release these men, or others waging the same struggle such as a Russian man detained at Eloy Detention Center in Arizona, ICE seeks to torture asylum seekers in their custody through the use of involuntary medical procedures like intravenous hydration and forced feeding.

The World Medical Association says competent hunger strikers should never be force fed; the WMA denounces all force feeding and states that “forced feeding of hunger strikers is unethical, and is never justified.” The American Medical Association has long endorsed the unequivocal position of the WMA in its opposition of involuntary force feeding of detained persons engaged in hunger strike. The International Committee of the Red Cross “is opposed to forced feeding or forced treatment; it is essential that the detainees’ choices be respected and their human dignity preserved.” The Inter-American Commission on Human Rights, the UN Working Group on Arbitrary Detention, the Special Rapporteur on human rights, and the Special Rapporteur on torture and other cruel, inhuman or degrading treatment in a joint statement said that “it is unjustifiable to engage in forced feeding of individuals contrary to their informed and voluntary refusal of such a measure. Moreover, hunger strikers should be protected from all forms of coercion, even more so when this is done through force and in some cases through physical violence.”

These hunger strikers are actively pursuing their asylum cases, they have ties to the community, they have willing and capable sponsors, and pose no risk to the community. ICE can release these men today. Historically, ICE has not held asylum seekers in prolonged detention. We call on ICE to do what they have historically done, which is to release these asylum seekers so that they can recover and continue pursuing their cases outside of detention.