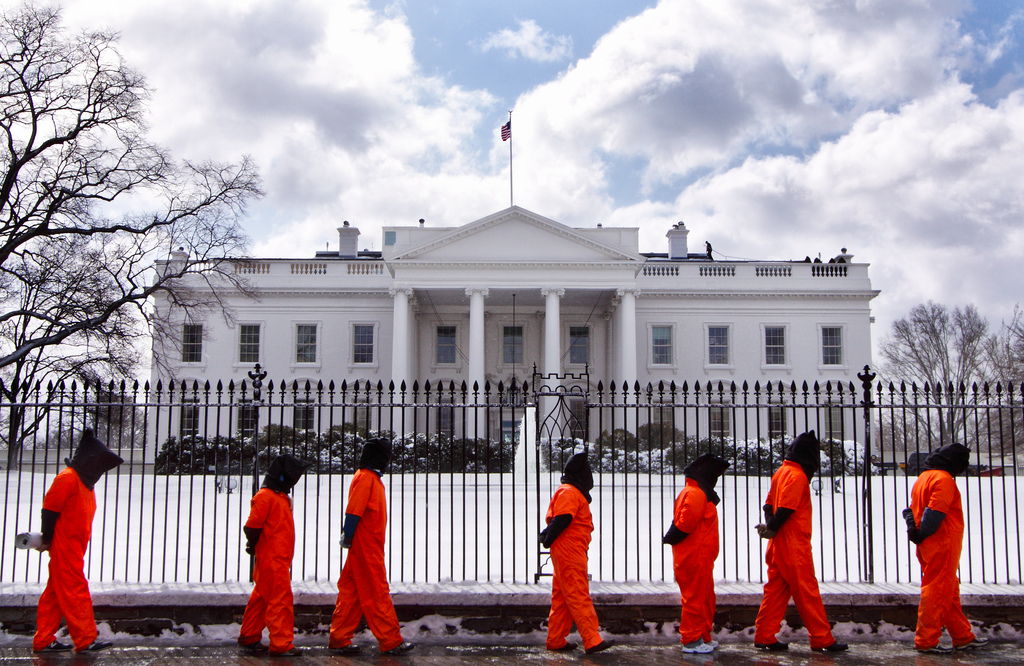 For over a decade, we’ve gathered outside the White House or at the Supreme Court on January 11 to mark the anniversary of the opening of the detention center at Guantanamo Bay. Over 700 men have been detained there. Fortunately, most have been released after having been cleared of wrongdoing. But 40 men are still detained at the facility, so it’s important that we continue to protest.

DRAD is co-sponsoring three events in DC, and one in Berkeley.

The State of Muslim Rights in the US War on Terror
Thursday, January 10
6-8:30 pm
Public Welfare Foundation
1200 U St. NW
Refreshments will be served, so please RSVP on eventbrite
Please spread the word on Facebook
This event is free

Friday, January 11 at 2:30 -4 pm In Lafayette Park in front of the White House
The protest is co-sponsored with Witness Against Torture, Justice for Muslims Collective, Center for Constitutional Rights and several other organizations. Please bring signs. There will be 40 orange jumpsuits and we may need some volunteers to wear them!

Thursday, January 10 Forum: The State of Muslim Rights in the US War on Terror

Thursday, January 10 at 6-8:30 pm at the Public Welfare Foundation, 1200 U St. NW
From drones, to proxy wars, to CIA Black Sites, to Communication Management Units, Muslims domestically in the US and around the globe have continued to be targeted under the guise of the War on Terror seventeen years after it’s onset. Refreshments will be served. Please RSVP here.

Artwork painted by Guantanamo prisoners will also be on display.

Friday, January 11 at 10-11 AM in room 1539, Longworth House Office Building. The briefing is open to the public and will feature Daphne Eviatar (Amnesty International), Maha Hilal (Justice for Muslims Collective), and other experts on Guantanamo. Congressional staff will be in attendance, and it’s helpful to demonstrate to them that there is interest and concern about the issue, so please join us if you can.