Texas The Latest Victory for Right to Boycott, As Another Federal Court Blocks an anti-BDS Law 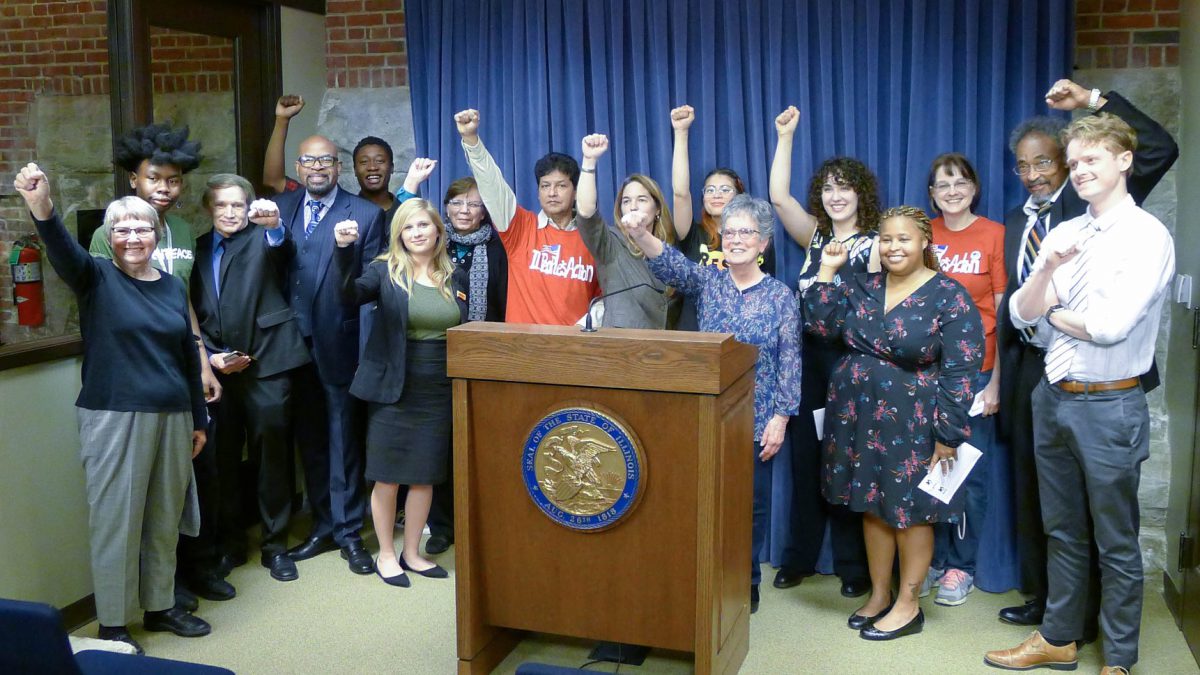 Press Conference on HB 1633 in Springfield on May 14, 2019, Illinois. Credit: Illinois People's Action

A diverse coalition of environment, civil liberties, community organizations, and unions worked together to defeat HB1633, an ALEC-inspired, industry-supported bill that took direct aim at peaceful, non-violent protests to protect the environment, particularly civil disobedience. Upon learning that the bill was tabled today for the rest of the session, the coalition applauded the development, but pledged to continue to work together to defeat any similar proposals in future sessions.

Defending Rights & Dissent is an active member of the coalition.

Although the bill was amended several times to remove some of the most draconian provisions, it was, at heart a bill to increase penalties for non-violent conduct, particularly civil disobedience by environmental activists, that was already covered in the Illinois criminal code.

“At a time when many people, including lawmakers, have recognized the deleterious effects that mass incarceration has had on society and have attempted to rectify laws that have criminalized certain conduct or imposed unreasonable penalties, HB 1633, would have been a giant step backwards,” said Kylah Johnston from The People’s Lobby. “By creating a whole new class of nonviolent offenders who could serve serious prison time, it was antithetical to criminal justice reform.”

“Environmental advocacy, including civil disobedience, much like union strikes, does not threaten physical infrastructure or worker safety,” said Stacy Davis Gates, Vice President of Chicago Teachers Union, a member of the coalition. “It threatens corporations that put profits and pollution ahead of justice and the environment.”

“We must remain vigilant in protecting the First Amendment, and our right to a healthy environment” said Tabitha Tripp, spokesperson for Southern Illinoisans Against Fracturing Our Environment, “We have a duty to our children to protect both.”

“This bill was nothing more than an attempt by big energy corporations and their ally ALEC to change Illinois law to intimidate us in exercising our right to protest.  And we just didn’t stand for it.” said Elizabeth Kosuth, grassroots leader with Illinois People’s Action.

National organizations were also deeply concerned. “We need elected officials who are champions for people and the planet. We need our lawmakers fearless in the face of oil and gas money in politics,” Greenpeace USA Executive Director Annie Leonard said. “We need them believing the science, telling the truth, and speaking out for their constituents over corporations. Senator Hastings did the right thing by tabling HB 1633, not just for the state, but as an example that shows that we the people need a healthy democracy to protect our planet.”

“This bill was meant to insulate powerful industries from public pressure to clean up their act by creating steep penalties for people of conscience who engage in peaceful civil disobedience,” said Sue Udry Executive Director of Defending Rights & Dissent. “We appreciate the politicians who stood with the diverse coalition that fought this bill. But most of all, we are inspired by the dedication, passion, and determination of the many Illinoisans from across the state who stood up for their right to speak truth to power.”