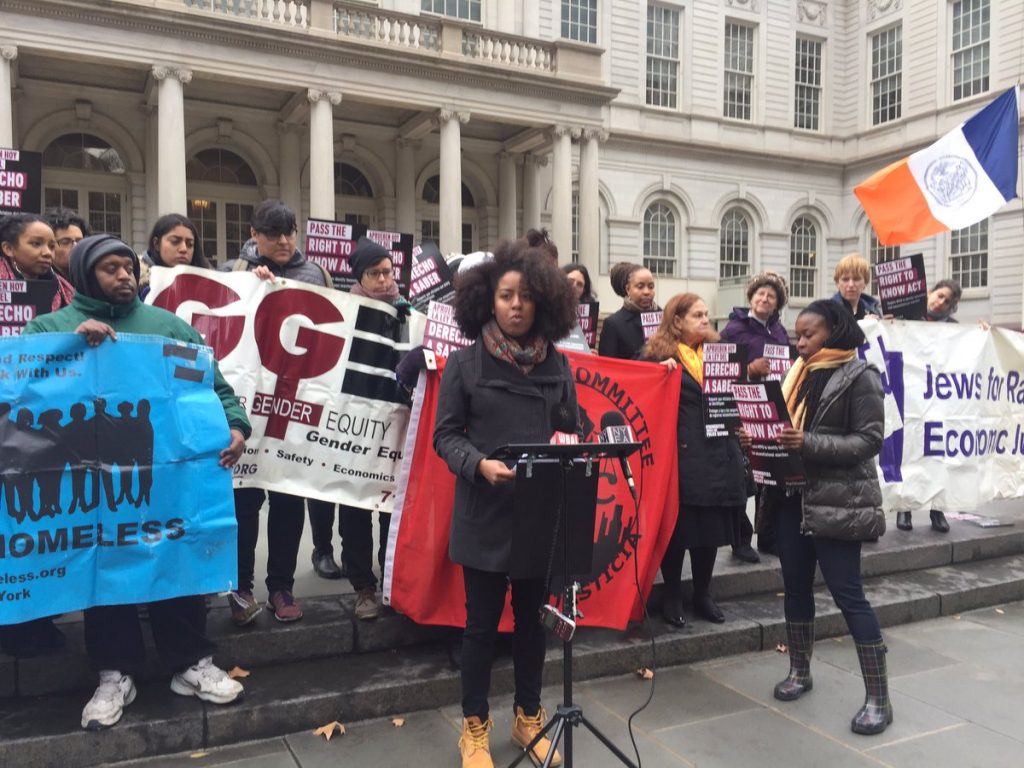 Women, trans and gender non-conforming New Yorkers rallied at City Hall on Monday to demand swift action from the New York City Council to pass the Right To Know Act. In communities across the city, women and trans* and gender non-conforming New Yorkers face gender-specific humiliation & abuse during their interactions with the police.  Today, BORDC/DDF Executive Directer, Sue Udry, joined with over 130 local and national leaders and organizations calling for the demands of women, girls, trans & GNC NYers to be heard. The Council must take swift action & pass the Right To Know Act to empower and protect women’s safety from NYPD abuses.

As feminist leaders and organizations committed to the improvement of the lives of women (cisgender and transgender) and gender non-conforming people, we write to strongly urge you as Council leaders to advance the Right to Know Act towards passage without any further delay. Each day that delays enactment of the Right to Know Act allows the NYPD to avoid much needed reforms and accountability that would be afforded by this common-sense legislation, leaving women across New York City without its critical protections. Following the recent election of a president who boasts about sexual assault, touts hyper-aggressive policing, and targets immigrant and undocumented communities, it is imperative for our city to demonstrate leadership by protecting the rights of all women and gender non-conforming people in their interactions with the police.

As reported by the New York Times, women experience gender-specific forms of humiliation and abuse during police interactions, including feeling “violated,” “embarrass[ed]” and “sexually intimidate[ed].”1 Researchers at the CUNY Graduate Center found that 2 in 5 young women in New York City report sexual harassment by police officers, and LGB youth are twice as likely to report negative sexual contact with police.2 Young women frequently describe inappropriate comments and touching during police stops, describing them as “stop and grope.” Transgender and gender non-conforming people also report ongoing unlawful searches to assign gender, often in the context of street stops. These patterns are consistent with those across the country, as recently highlighted in the U.S. Justice Department’s recent report on policing in Baltimore and the African American Policy Forum “Say Her Name” report. The recently filed class action lawsuit against the City for the discriminatory arrests of women of color and transgender women under loitering statute, 240.37, only reinforces the serious, systemic and continuing nature of the problem