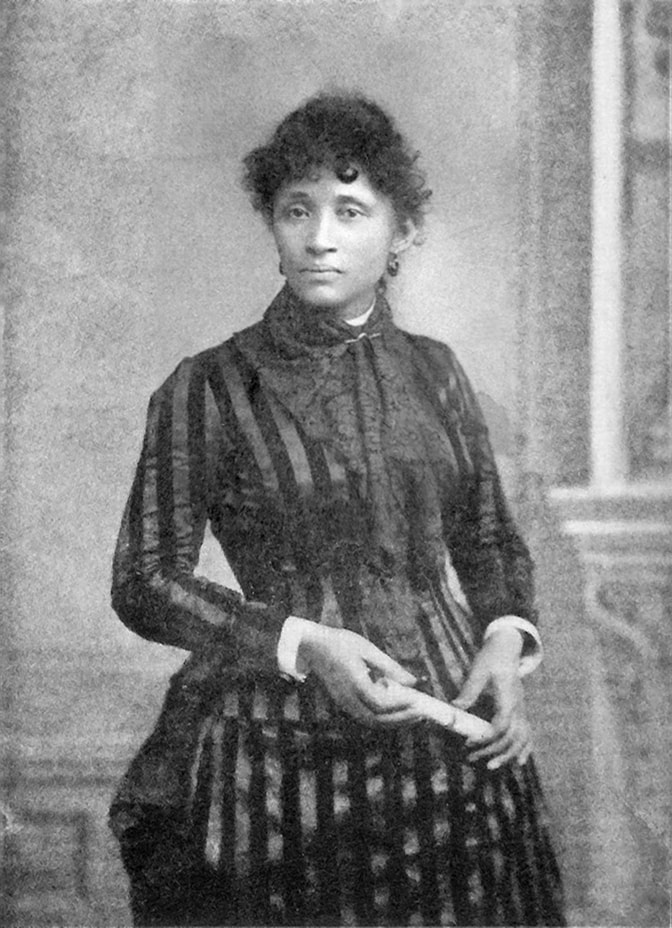 “Governments never lead; they follow progress. When the prison, stake or scaffold can no longer silence the voice of the protesting minority, progress moves on a step, but not until then.”

Lucy Parsons (c. 1853 – March 7, 1942) was a radical labor organizer and anarchist communist. She became involved in anarchist organizing alongside her husband and rose to national prominence during his trial and execution for the Haymarket Affair. After his death she remained a leading figure in American radical circles and was active as an organizer and agitator until her death in 1942

Not much is known of Lucy Parsons’ early life. She was likely born around 1853 in Texas, probably the daughter of slaves. She was of mixed African, Native American, and Mexican ancestry.

Around 1870 Lucy was living with a former slave named Oliver Gathings. While living with him she met Albert Parsons, a white man and Confederate veteran. Lucy and Albert later married though because of Texas anti-miscegenation laws their marriage was likely illegal.

In 1872 Lucy and Albert Parsons were both forced to flee Texas, due to their marriage and political activities. Albert was already estranged from his immediate family because of his marriage to Lucy (his brother William was the editor of a white supremacist newspaper). He’d also worked to register newly freed blacks to vote, and was shot in the leg and threatened he’d be lynched if he continued.

The couple arrived in Chicago in 1873 where Albert was hired as a printer for the Chicago Times.

In the summer of 1877 railroad workers across the United States went on strike to protest wage cuts by the Baltimore-Ohio Railroad. In July of 1877 the strike moved to Chicago, and rail workers in the city fought police and engaged in industrial sabotage overturning train engines and baggage cars.

During this time Albert Parsons addressed large crowds of up to 25,000 workers, and suggested peaceful ways of negotiating between the railroad and the workers. His public presence moved Albert Parsons to the forefront of the Chicago Anarchist scene and got him fired from his job as a printer at the Chicago Times. He was also blacklisted by the Chicago printing trade.

Lucy Parsons opened a dress shop to support the family, becoming the breadwinner for the parsons. Her work as a dressmaker brought her into contact with the International Ladies Garment Workers Union (ILGWU), and with her friend, Lizzie Swank, Lucy hosted meetings for the ILGWU.

Her work with the Garment Workers Union began Lucy’s lifetime involvement in radical politics, and she began writing for radical publications. In 1883 Lucy and her husband Albert helped found the International Working Peoples Association (IWPA), an anarchist group.

On May 3rd outside the McCormick Harvest Works in Chicago, a strike turned violent after Chicago Police Fired into a Crowd of unarmed strikers, four of whom were killed.

In reaction to the shooting Chicago radicals called a mass rally in Haymarket Square to respond to the police violence. The meeting was raided by police and during the melee; an unidentified person threw a bomb into the crowd killing a police officer. Over the next few days Chicago police rounded up radicals across the city and put them on trial for the murder in Haymarket Square.

Albert Parsons was one of 8 men who were charged for the murder. Though he was not at Haymarket at the time of the bombing, police argued he was part of a conspiracy that led to the bombing. Albert went into hiding until the first trial date when he turned himself in at court.

During this time Lucy Parsons was placed under surveillance by the Chicago Police. Although Lucy was also seen by prosecutors as a co-conspirator in the Haymarket Affair she was never charged for strategic reasons. The prosecutors sought the death penalty against all the defendants and they felt that a jury was unlikely to sentence a woman to hang. Furthermore there was the fear that if she were to appear in court alongside the other defendants any sympathy the jury felt for her might hurt their chances of getting convictions against the other eight.

In October of 1887 the defendants in the Haymarket trial were found guilty and sentenced to death by hanging. While awaiting execution one of the defendants committed suicide while in prison. Two had their death sentences reduced to life imprisonment and another to 15 years in prison on appeal. The rest were still to be hanged.

Lucy Parsons enraged at the verdict against her husband, launched a campaign for clemency. She travelled across the United States speaking out against the trial, and collecting funds for Albert Parsons’ legal fees. She was forced to do this on her own time and money, since her union refused to support the defendants.

Lucy parsons had been a member of the Knights of Labor for more than a decade. The president of the Knights was Terence Powderly, a moderate who discouraged the use of strikes and was concerned by the increasing radicalization of American Labor. He publicly supported the prosecution of the Haymarket defendants, and refused to aid Lucy Parsons in her campaign for clemency.

Despite this lack of support Lucy continued her efforts on behalf of her husband, but was unable to convince the Illinois Governor to grant her husband clemency. Albert Parson and the 3 other defendants were hanged on November 11, 1887.

Lucy took her two children with her to try and see Albert one last time. Instead of saying their goodbyes Lucy and her children were arrested. They were taken to jail, were Lucy was forced to strip naked and then left in a cell with her two children until Albert Parsons was hanged.

After the execution of her husband Lucy became even more militantly anarchist, and devoted the rest of her life to political agitation. Her uncompromising politics brought her into conflict with different tendencies within the labor and anarchist movements.

During the 1890’s most of the American labor movement chose to ally with the Democratic Party because of its progressive and reformist politics. Lucy along with much of the anarchist and socialist movements opposed this turn, arguing that labor should maintain its political independence.

Adding to her estrangement from labor was Lucy’s decision to break with craft unionism, the dominant model in American labor throughout the 19th century, in favor of industrial unionism. Craft unionism emphasized the organization of skilled workers along job lines, while industrial unionism emphasized the need to organize all workers in an industry.

Lucy also found herself at odds with other anarchists over the priorities of their movement. She felt that class issues ought to form the primary concern of anarchist organizing and critique. This led to considerable friction with other anarchists particularly Emma Goldman who emphasized reproductive freedom and free love which Lucy saw as an attempt to appeal to middle class audiences.

Despite Lucy’s differences with her anarchist and labor allies, she remained active in labor and radical struggles throughout the 1890’s. She organized among the miners of the Spruce Valley Coal Co. , spoke before Coxey’s army of unemployed during its march to Washington to demand action on unemployment and supported the boycott of State Street Stores during the Chicago Teamsters Strike.

Work with the IWW

Lucy was one of the many radical labor organizers and leaders who were present at the founding convention of the IWW in 1905, and she was the second woman to join the new union. The IWW with its emphasis on direct action and class struggle shared many traits with Lucy’s own political philosophy. At its founding convention Lucy helped shape the direction of the new union advocating for the general strike that would bring workers to power. The general strike became forever associated with the IWW and its goal of “one big union.”

That same year Lucy Parsons was made editor of the IWW publication, “The Liberator” a radical paper based in Chicago. In her editorials she advocated on behalf of women’s issues including the right to divorce and remarry, and access to birth control.

She was also involved in the IWW’s on the ground organizing campaigns. During 1907 and 1908, during another period of economic crashes Lucy became involved in IWW relief and organizing efforts among the unemployed.

In January of 1915, Parsons also helped organize Hunger Demonstrations in Chicago. These proved successful enough to push the AFL, and Socialist Party to participate in a larger Joint demonstration on February 12.

In 1925 Lucy began working alongside the recently founded Communist Party, and in 1939 she officially joined the group. While it’s not entirely clear to what extent she supported the Communist Party’s political philosophy by this point Lucy had fallen out with the main currents in American anarchism.

During this later period Lucy worked with the Coalition for International Labor Defense, a communist supported group. Through her involvement in Labor Defense Lucy worked on the Scottsboro Eight and Angelo Hearndon cases. This was the first time since she and her husband Albert had fled Texas that Lucy returned to the south, and became involved in issues of race.