Boston, along with Minneapolis and Los Angeles, was named a pilot site for a federal CVE campaign in 2014.  Ostensibly aimed at identifying potential “extremists,” CVE initiatives have been shown by sound research to be based on discredited theories about ideology leading to violence.  In practice, such programs have resulted, where they have operated such as in the U.K., in racial and religious profiling, the extension of invasive surveillance into the health and education sectors, erosion of confidentiality norms, increased stigmatization of the use of mental health services, and policing of dissent.

In addition to CVE’s harms on Muslims and People of Color, the petition’s sponsors noted EOHHS collaboration with federal prosecutors in counterterrorism initiatives could undermine agencies’ credibility and effectiveness of outreach to marginalized communities. 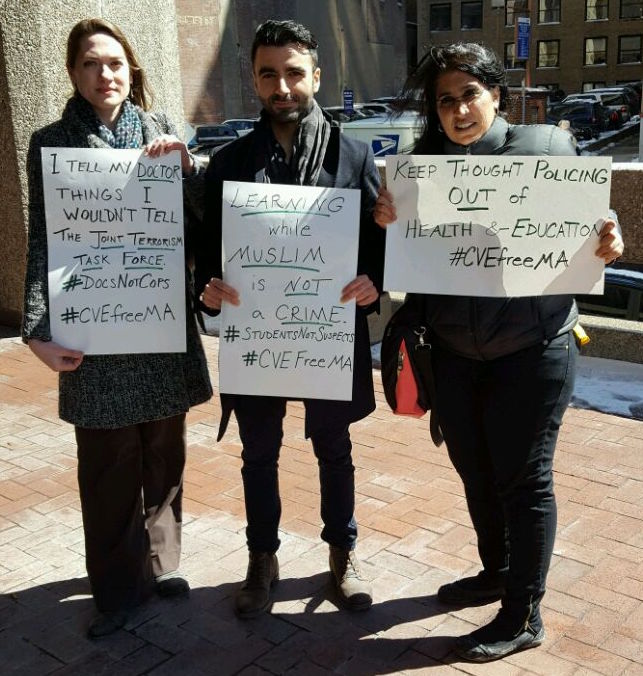 Activists, after delivering petitions to EOHHS

“As an HIV social worker, it’s my job to build trust with my clients to support their physical, emotional, and psychological health,” said Asher Ruskin MSW LCSW of Jewish Voice for Peace-Boston. “I’m concerned that Countering Violent Extremism would encourage me to police my clients based on race, religion, and political beliefs.”

“Massachusetts has long been a leader in such areas as health care access. But EOHHS collaboration in a counterterrorism campaign with a track record of profiling and stigmatizing disfavored communities threatens to breed mistrust and chill use of health and social services,” noted Shannon Erwin, co-founder and executive director of the Muslim Justice League.

“We’re worried that CVE would lead to greater police intrusion in people’s lives, without there being any reasonable suspicion of their involvement in an actual crime. The Constitution forbids the government from monitoring ‘communities at risk of radicalization’ just in case they commit a crime,” explained Alex Marthews, President, Restore the Fourth – Boston.

“We urge Massachusetts to reject this unconstitutional program, which focuses on the political and religious beliefs of young people to decide if they are security risks,” stated Sue Udry, executive director, Bill of Rights Defense Committee/Defending Dissent Foundation.

The petition delivery coincides with a deadline to submit input to EOHHS regarding its plans to re-grant $217,000 it received from the United States Attorney’s Office for deployment of the CVE campaign.  Co-sponsoring organizations found the formal process to submit input to be fairly cumbersome for under-resourced organizations and created the petition to provide an accessible means for residents with concerns about CVE to contribute their voice.

BORDC/DDF submitted input to the EOHHS regarding its CVE program, strongly condemning the program and recommending that EOHHS decline to participate. Read our input here.

Daniel Hale is serving almost 4 years in prison for revealing the shameful legacy of the US drone assassination program.

At Defending Rights & Dissent, we have amazing board members. Here's some of their recent output!

This afternoon, the House will vote on @RepHankJohnson amendment to keep weapons of war out of the hands of local police. It deserves a YES vote from every member.

Our communities are not war zones. #End1033